In Ex Machina we see how the birth of life leads unavoidably to a battle for power. Alex Garland (writer of 28 Days Later and Sunshine) makes his directional debut with this taut sci-fi thriller rich with ideas and atmosphere. Caleb (Domhnall Gleeson), a programmer for massive search engine Blue Book, wins a company wide lottery to spend a week with the companyâ€™s mysterious CEO. Played with equal parts alpha male swagger and nervy sensitivity by Oscar Isaac, Nathan Bateman is a genius who lives a life of luxurious seclusion befitting a Bond villain. But to begin with Nathan is more Hank ScorpioÂ than Dr No, escorting his employee around his futuristic house with the faux chumminess of the incredibly powerful. This charade is cut short when Nathan reveals he has invented a robot with artificial intelligence. Caleb isnâ€™t here to hang out, heâ€™s been selected to initiate a Turing Test, an interview process that determines whether Nathanâ€™s robot is conscious.

When we meet Ava (Alicia Vikander), three things are immediately clear. One, she is a robot, as is evidenced by her transparent stomach, internal wiring and visible artificial brain. Two, she acts precisely like a conscious creature. Three, she is a beautiful woman. With all these pieces in place, Garland unleashes a chain of causality as shocking as it is inevitable. 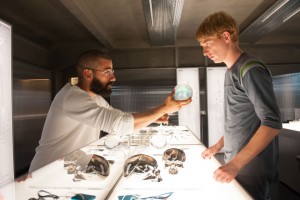 Nathan, like all great mad scientists, is both technically brilliant and emotionally blinkered, wilfully ignoring the complicated moral problem Caleb canâ€™t; what does it mean if Ava truly is conscious? To begin with, it means Nathan has effectively transformed a gadget into a prisoner. He sees the creation of AI as inevitable (an opinion many real-world scientists share), so he conveniently views himself as a function of history, yet is perfectly comfortable in the next breath referring to himself as godlike. Garland instead asks complicated existential questions visually, taking every chance to catch his characters in reflective surfaces as their senses of self wane and distort.

Itâ€™s worth noting that Ex Machina sets up an uncomfortable dynamic; the only female speaking role is technically an object. Vikander imbues Ava with a striking loneliness, with lively eyes searching for Calebâ€™s empathy while simultaneously flirting with him. Itâ€™s kept ambiguous whether her sexuality is real or a pantomime and, more importantly, whether it makes her hunter or prey. 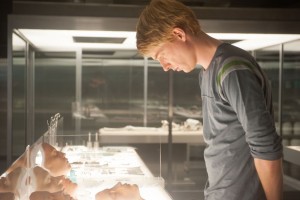 Nathan makes mention of Maryâ€™s Room, a thought experiment involving a colour scientist with limitless knowledge of her subject: wavelengths, effects on the brain, cultural meanings. Except Mary lives in a black and white room and is only able to see the outside world on a black and white monitor. What happens if Mary leaves the room? With Ex Machinaâ€™s chilling climax, itâ€™s clear Alex Garland has more than a couple of ideas.

When In Cinemas now

Review: Judith Lucy – Ask No Questions of the Moth