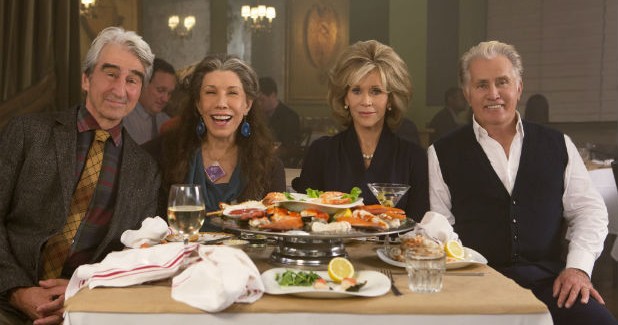 Grace and FrankieÂ is a single camera sitcom built on a simple premise: Thirty minutes with Jane Fonda and Lily Tomlin is always time well spent.

Part of Netflixâ€™s growing library of original content (includingÂ House of Cards,Â BloodlineÂ and this primary coloured nightmare) Grace and Frankie re-teamsÂ 9 to 5â€™s Fonda and Tomlin in that classic TV staple, the odd couple. Well, sort of. The elevator pitch is this: Grace (Fonda) and Frankie (Tomlin) play the respective wives of Robert (Martin Sheen) and Sol (Sam Waterston), partners in law and, as it turns out, partners in love. For decades theyâ€™ve been conducting an affair and now they want to divorce their wives so they can marry each other. Despite their contentious relationship â€“ Grace is an uptight WASP and Frankie a new-age hippie â€“ the women find themselves living under the same roof, trying to make sense of their shattered lives and learning all the essential TV lessons. 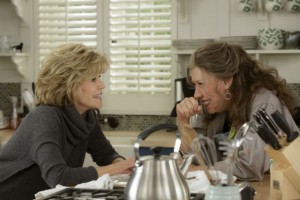 This could make for truly insipid television. Itâ€™s a premise thatâ€™s as worn out as any in the cultural memory involving a central cast of elderly and/or gay characters, two groups traditionally treated like walking punch lines by sitcoms. ButÂ Grace and FrankieÂ makes the crucial decision of taking its characters seriously, allowing its humour to emerge from the charismatic performances of its central cast.

It should be a shock to no one with a decent cinematic memory that Tomlin and Fonda have terrific chemistry. By turns funny and tender, they build a relationship between the eponymous women that transcends their stock characteristics. Perhaps more of a surprise is Sheen and Waterston, who lend a real humanity to the couple whoâ€™ve loved each other in private for twenty years but are just now negotiating the struggles of being an â€œoutâ€ couple. Theyâ€™re not portrayed as bad guys but men whoâ€™ve struggled for decades to release themselves from a private prison, who now find themselves by turns wracked with guilt and overwhelmed with joy. 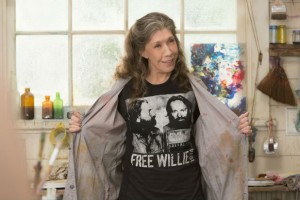 The four central actors are given plot lines either denied to older actors or completely ignored. To hear Frankie explain the continued importance of condoms in post-menopausal sex is surprisingly refreshing, especially when punctuated with her aggressive swearing (no one swears better than Tomlin) and dope smoking.

But the further out we travel from this core four, the shakier the series gets. The supporting characters, mainly the children of the two couples, are well cast but the writers seem unsure of just what to do with them. Their subplots lack heft and scenes without any of the central four often lack momentum and purpose. Hackneyed plots are recycled from televisionâ€™s past along with conceits that this A-list cast canâ€™t always rise above. A conservative boss is coming over to the bachelor party! The feuding partners get stuck in an elevator! Two characters dress as each other! Actually, that last one was pretty charming. 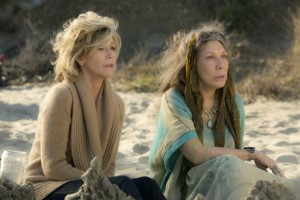 Frankly, even when the show itself goes completely off the rails (thereâ€™s a twist at the end of one episode thatâ€™s particularly egregious) itâ€™s hard not to be charmed byÂ Grace and Frankie. Itâ€™s thirty minutes with Tomlin and Fonda, whatâ€™s not to love?

Grace and Frankie is streaming on Netflix now

What’s On in Melbourne for Writers This Winter