Given the sheer elation I experience in any Nolan head-drama, it was difficult to prepare myself to face Interstellar with any sort of criticism.

From his earlier, less ambitious filmic endeavours (see Memento, Insomnia, Following) to his more recent (the Batman Trilogy, Inception); Christopher Nolan has proven his firm grip on the balance between spectacle and smarts. While naysayers are often quick to call out his lack of empathy or heart, in favour of size and scale, itâ€™s impossible not to be drawn in by clever filmmaking that tries harder and harder to bite off more than it can chew. 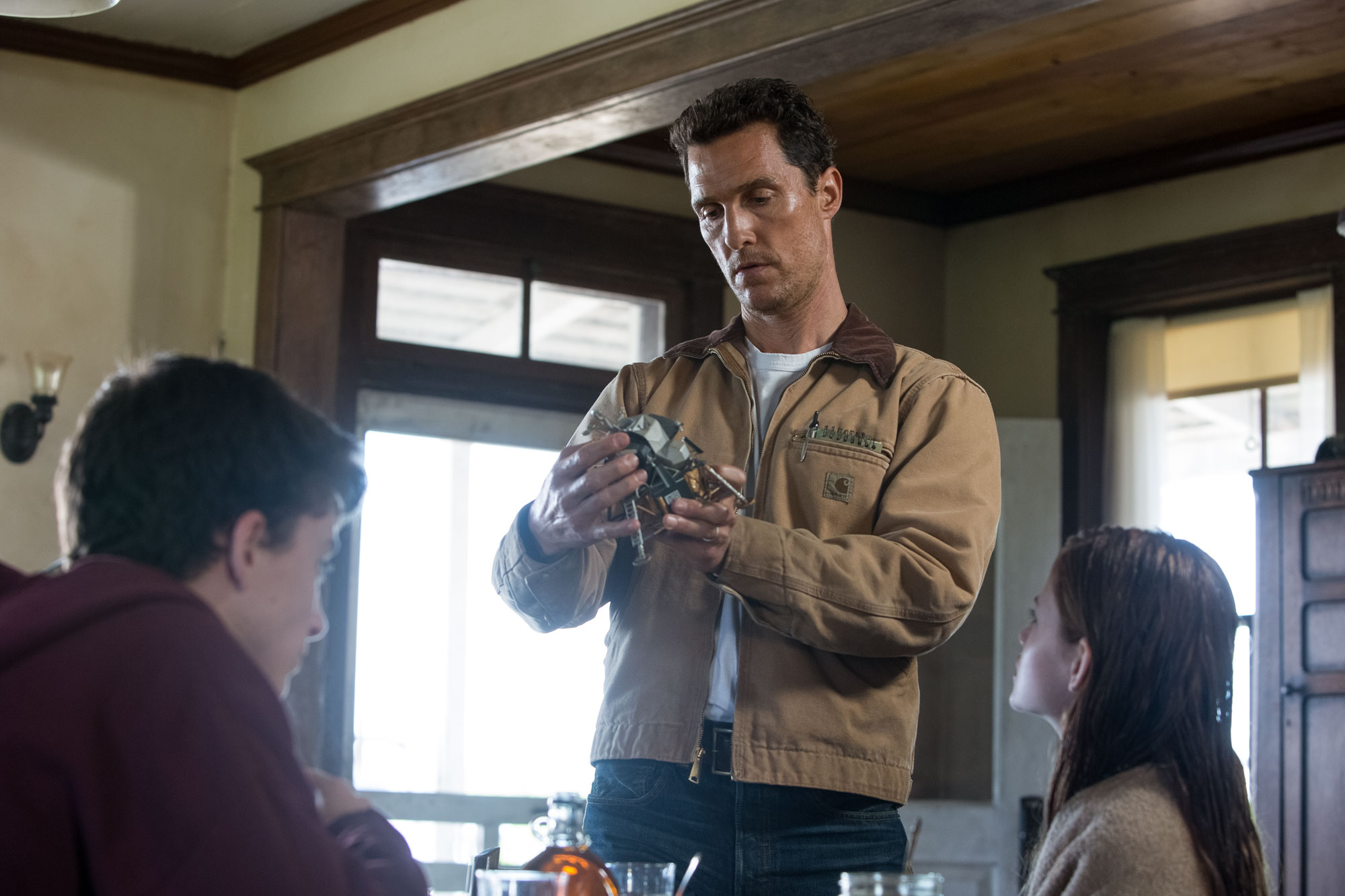 It seems that Nolan has flown a little too close to the sun for some, encouraging some questionably scathing reviews.

â€œEnough is enough: It is not just that Interstellar is as incoherent and pretentious as a film can be at close to three hours and $160 million. It also sullies our last hallowed legend, the end of the worldâ€¦Donâ€™t we know we deserve an end to it all when Interstellar can pass itself off as an entertainment, instead of an ordeal?â€ (David Thomson, The New Republic)

â€œInterstellar tries to ground its corn-pone mush in quantum theory and paper over its planet-sized plot holes with enormous vistas and the most egregious use of Dylan Thomas ever committed to screen.â€ (Joe Gross, Austin American-Statesman)

â€œMostly, Interstellar is super-dull and super-annoying and super-dumb because it posits itself as a film of many big ideas when it doesn’t even possess a single decent one.â€ (Deborah Ross, The Spectator)

At the script level, it is feasible that Interstellar misses some basic marks to drag the whole experience down. Was this really what to expect?

It seems to me that all too often the more beautiful, or impressive, or closer to perfection something is, the more people feel they need to reduce its majesty. 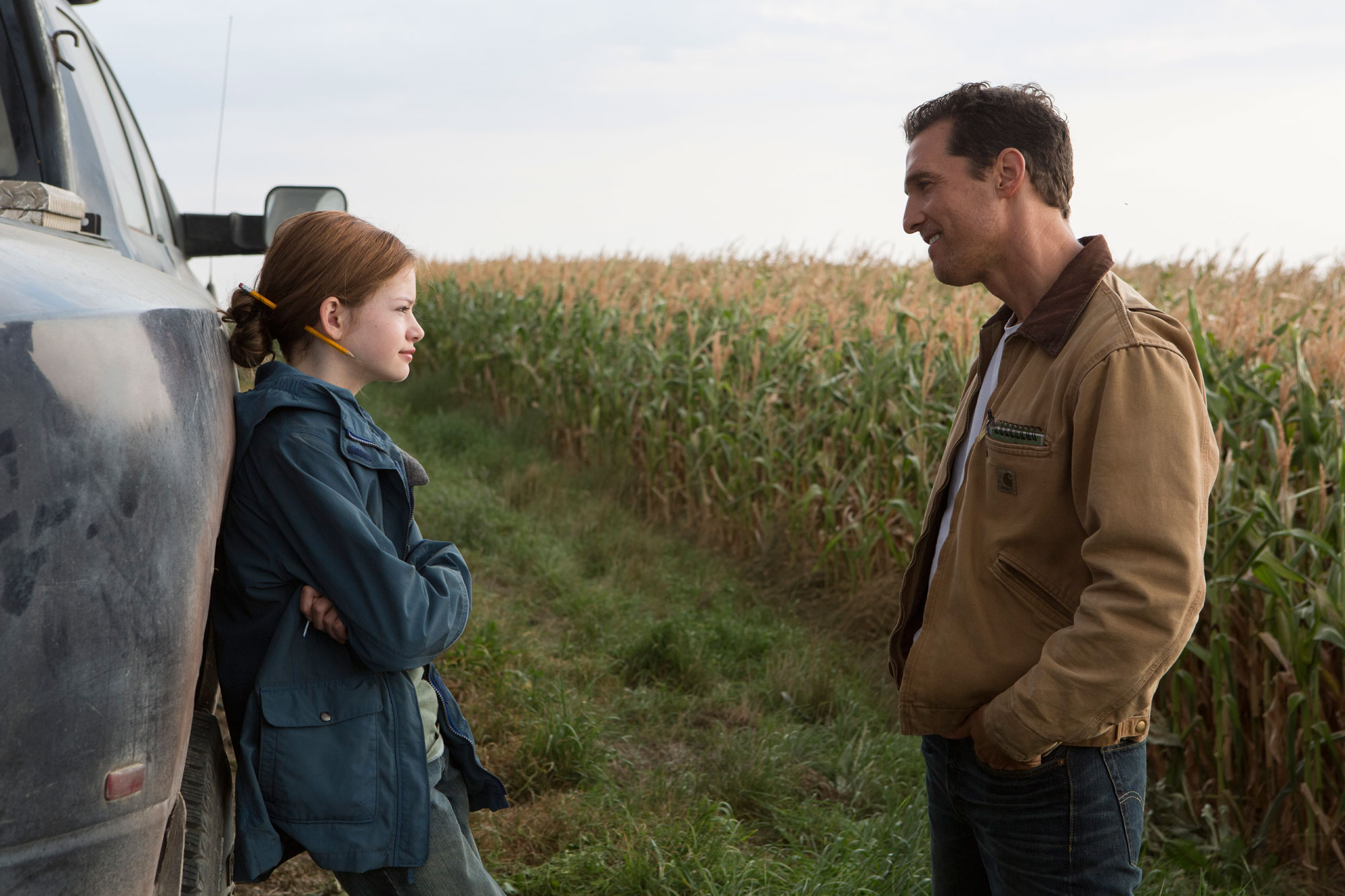 The film opens to a uniquely apocalyptic future where food production has rapidly expired, and necessity has called all the worldâ€™s inhabitants to a farming lifestyle. Coop (Matthew McConaughey) is an engineer come astronaut come farmer, struggling with two children who are unalike, but a lot like himself, and an inescapable inclination that in any other lifetime he could have been built for greatness.

Through a series of happenstances Coop finds himself with daughter Murph (an astronomical performance from a young Mackenzie Foy) at the now defunct NASA institute, where a group of scientists are looking to the stars for their last hope; another Earth. 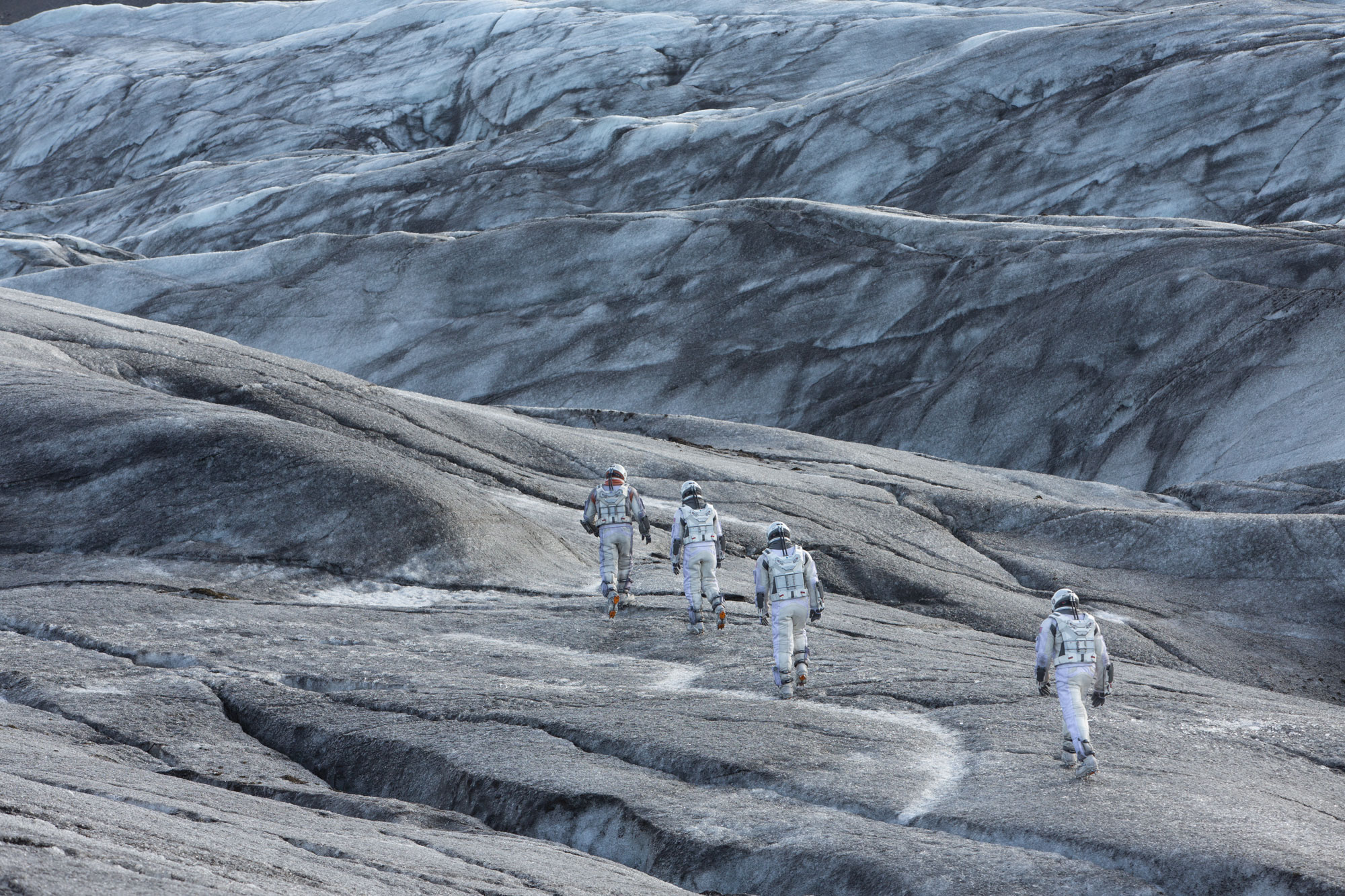 Despite a handful of nagging criticisms; Interstellar is, quite simply, a marvel of modern filmmaking.

Interstellar takes its time fleshing out these characters, in particular the home life of Coop, petering on the edge of dullness by its end. While the Nolan brothersâ€™ have built a character story thatâ€™s more in depth than their previous attempts, at times scenes will spiral around a discussion for far too long. It often struggles to find any time for silence.

All this build up seems exhaustive, but the fully realised sense of the Earthâ€™s slow demise is at least satisfying, and when the stakes are raised for Coopâ€™s success, our attachment to the world at risk makes us hold our breath a little bit tighter.

Inevitably, when Interstellar breaches discussions of gravity or interstellar travel, things get a little cold. While the science is riveting and within the realms of possibility, itâ€™s the dry and expositional dialogue that sits at a stark contrast to the emotional stuff surrounding it. 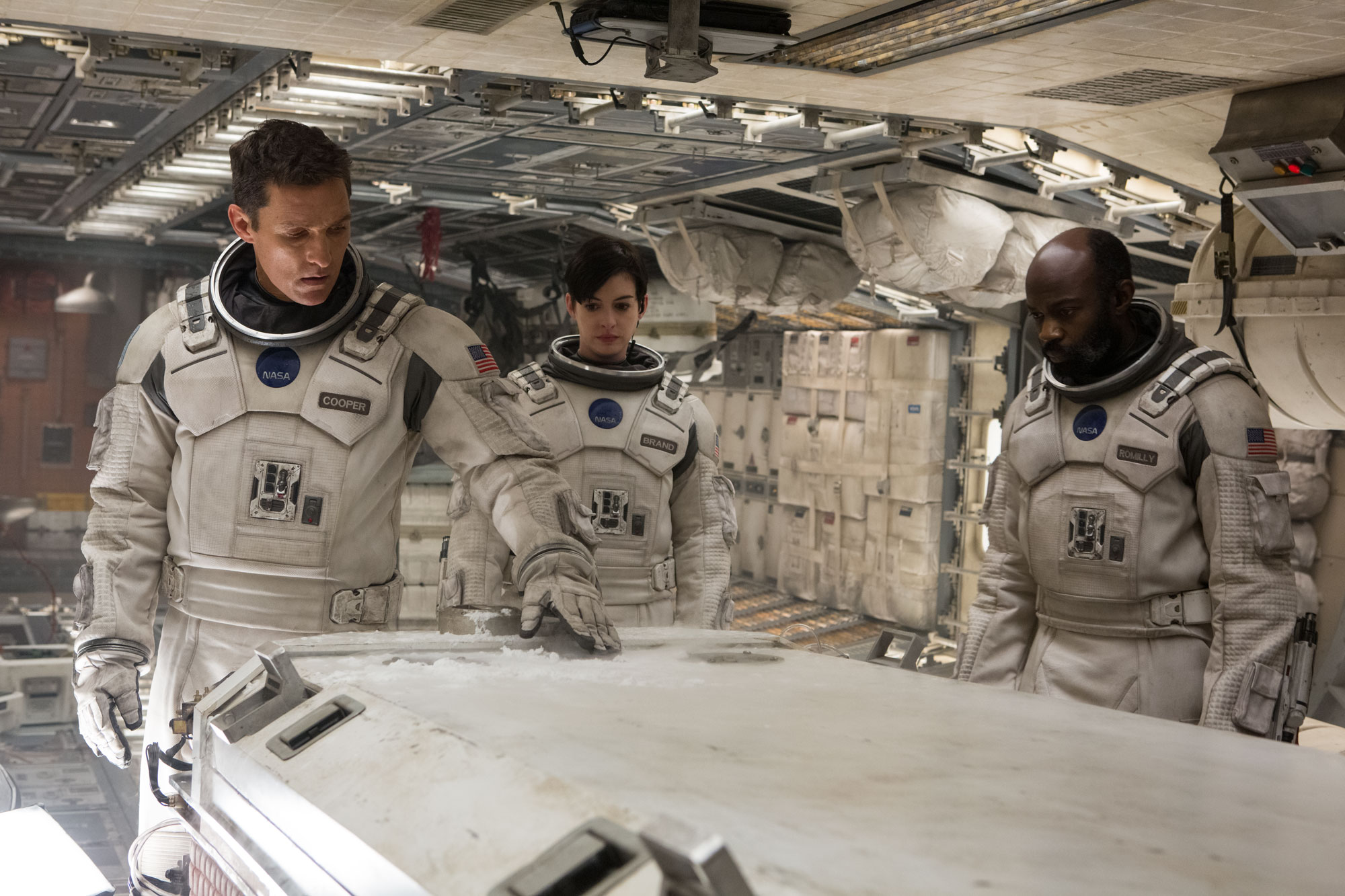 For all this disjointedness, the sense of scale it teases out is worth all the exposition. Interstellar builds outward in the same way that Nolanâ€™s previous blockbuster Inception built inward. It has all the same parts working in reverse.

Eventually Interstellarâ€™s outward reach exceeds its grasp, and intelligence begins to slip in way for intriguing, but nevertheless disconnected surrealism. A rudimentary understanding of space, physics or other dimensions only serves to improve your experience of Interstellar, making some of its concepts far more impressive for their accuracy (and in the case of the filmâ€™s climax, less ridiculous than it outwardly appears).

This is only improved further by cinematography and sound design that lends itself to the grandiose. Thunderous instrumentals contrast with deathly silence in quick succession, in a way that is both captivating and tension raising. 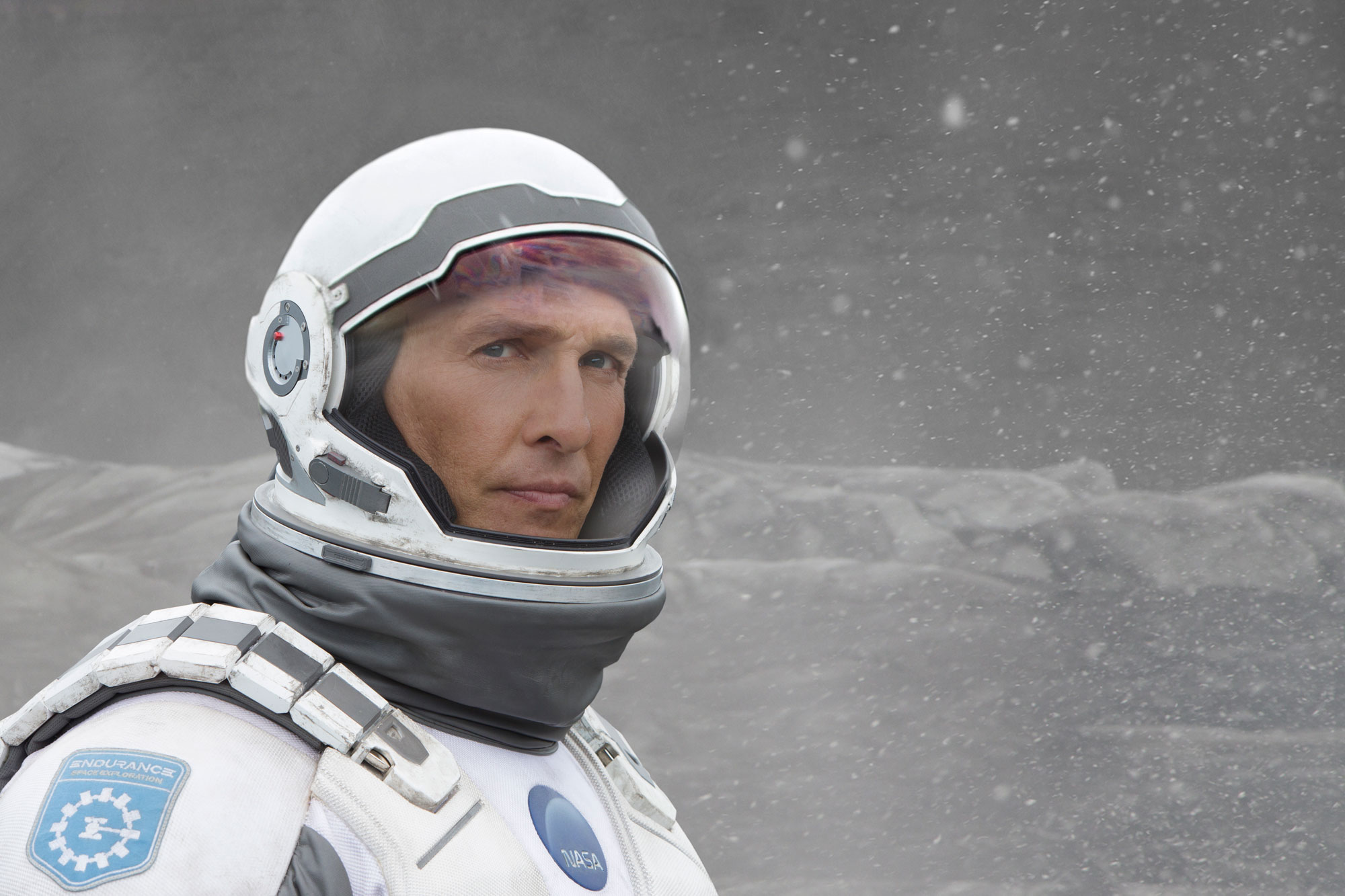 Christopher Nolan is quickly becoming a polarising filmmaker from a critical perspective. Too many people feel a duty to cut down a film before it gets too big for its own legs, and certainly Interstellar has been hurtling that way for some time.

The film is about everything big. Big ideas, big risks, big money, big technology. Heck, even the title Interstellar screams â€˜bigâ€™. But itâ€™s a duty of care for critics to take every film with a grain of salt, and despite the inevitable uproar of â€˜perfectionâ€™ from a more casual viewing audience, any professional critic has to steer clear of fighting too hard in the opposite direction.

Iâ€™m sure many will find distaste in Nolanâ€™s boastfully heavy handed cinematography and score, supporting an arrogantly-massive scale film. However, to tear the film down simply out of spite or self-righteousness seems to be on too many writerâ€™s agendas.

There is so much to fall in love with in Interstellar that to let minor complaints detract from an otherwise adventurous and mind-boggling sci-fi like this is a wasted opportunity. How often do we experience a big-budget, big-dreams epic as well-crafted and satisfying as Interstellar? The early comparisons to Kubrickâ€™s 2001: A Space Odyssey are vague in terms of narrative, but undeniably true in the case of its wonder at the universe.

For all its flaws; Interstellar is enormous, ambitious, loud, and simply one of the best movies you will see this film season.

A trailer for Interstellar can be found here.