The Brisbane International Film Festival has been and gone for the year but not without sharing Labour Day, the latest masterpiece from writer, director Jason Reitman and based on the novel by Joyce Maynard.

The brilliant mind behind such comedy dramas as Juno, Up In The Air and Young Adult, Reitman strikes again with a more ominous tone and subject matter, relying heavily on sharp dialogue and strong actor performances.

Labour Day is the story about depressed, single mother Adele and her son Henry who unwillingly become involved with harbouring a wounded, threatening escaped convict.

The hostage situation takes a turn as the mother and son gradually learn his true story and explore their limited options of a future together.

The film opens with a broken American family as Henry takes care of his traumatised mother. Through these scenes the wonderful, raw performances by Kate Winslet and young upcomer Gattlin Griffith really set the tone for the success of the story.

We become so incredibly involved in the life of these two characters that we are convinced of Winsletâ€™s overwhelming anxiety and desperate nature and Griffithâ€™s deep concern for his mother. 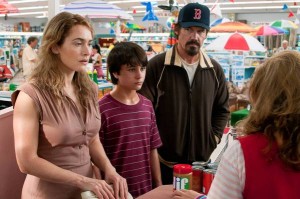 As the film progresses, definitions of morals and ethics are subverted while the relationships between the three lead characters evolve.

The audience is on edge waiting for the destruction of Frank, however are given timely grimaces into his haunted past which reveal how he landed in prison and why he may deserve a second chance.

With a basic storyline, the film is really about the emotional relationships of these three people who have each been cut off from the outside world in their own way.

The character of Adele could be particularly relatable and touching to people who have experienced similar trauma. 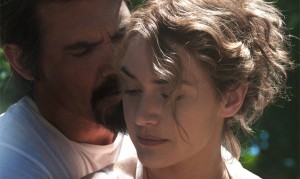 The second most notable element of Labour Day is the beautiful, soft musical score and sound that emphasises every moment of pain, anxiety and hope.

More impressive are the handful of scenes where the absence of sound has the audience holding their breath on behalf of the characters.

Labour Day is a powerful, moving production worthy of a cinema viewing experience purely to indulge in those sweet, intense interactions without distraction.

Labour Day will be nationally released in Australia on February 6 2014 but check the trailer out here.