From one horror fanatic to another I’ll admit, I got scared.

I’m not sure if it was the groans of a mutant creature in the darkness, or the perfectly timed fog but you win this round, Movie World Fright Nights.

The youthful, sunlit innocence of the Hollywood Boulevard that most of us are familiar with has been abandoned and transformed into a misty, dystopian wasteland.

Fright Nights not only indulges in cheap scare tactics but it excels on a large production scale with incredible costumes and make up, engaging set design, music and effects to create an atmosphere of horror blockbuster proportions.

Zombies, redneck butchers, cloaked grim reapers, haunting girl ghouls interacting throughout the crowd and you havenâ€™t even entered the maze yet.

As one of the largest events to feature in Queensland this year, the night is made up of four equally creepy, realistic and at times horrifying mazes; The Walking Dead, Evil Dead, The Darkness and the stand out Hillbilly Slasher ll purely for the creativity in set design and confronting characters.

The Evil Dead maze receives an honourable mention for the attention to detail from the unsettling 2013 film.

There is also a brief live show and access to a handful of rides including the Arkham Asylum, Green Lantern coaster and Superman Escape, that operate between 6pm â€“ 9pm.

The only drawback with the Fright Nights event becoming such an exclusive and successful production, is that a greater mass of people attending means longer queuing in lines before rides and mazes.

In fact the second Fright Nights this year was remarkably bigger than opening night after selling out therefore there is the possibility that line-ups could take up to 40 plus minutes.

The positive aspect here is that with the spooky, electric atmosphere, and constantly roaming characters you wont tend to notice the time as much as you would in the stark midday heat.
Not to mention the convenience and clever marketing ploy of food stalls located along the lines, with staff hand delivering purchased goods.

For an additional prices you can avoid the queuing for the mazes by purchasing â€˜fast trackâ€™ tickets. 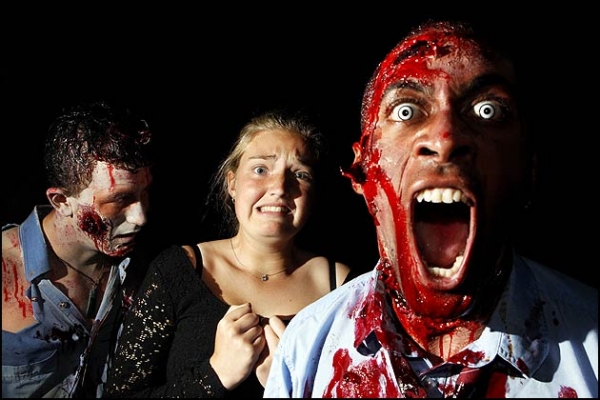 Even though I felt as though this event was not suitable for children, there is something twisted and oddly heart-warming about a young girl in pigtails waving to a blood soaked, knife-wielding butcher.

While maniac hillbillies and the anti-social walking dead may not exactly be your cup of tea, Movie Worldâ€™s Fright Nights can make for an interesting, weirdly wonderful experience with friends or ideal choice for casual fun on date night.