It is inconceivable to hold an event in honour of Japanese cinema without showcasing the works of Hayao Miyazaki. Out of all the Japanese directors, Miyazaki is most loved and of his films, My Neighbour Totoro the most beloved.Â For Australian audiences unfamiliar with Miyazaki’s works, in terms of popularity among their home country for making animated children’s movies, MiyazakiÂ can be likened to Walt Disney. A comparison I find personally insulting to the talent and depth of Miyazaki’s art. Â Disney’s works are built almost entirely off the one blue print, his characters are highly idealised and his stories interruptedÂ with floweryÂ ballads, and almost all are contained inside a romanticised patriarchal world. Â If you go to a Disney movie, you know the outcome. Â None of this is true ofÂ My Neighbour TotoroÂ or any of Miyazaki’s films.

Two sisters,Â Mai and her older sister Satsuki move to the country with their dad, their primary carer. Their new home is full of spooky soot spreaders and is supposedly haunted, a plot line that is meant to contrastÂ the anxietiesÂ children feelÂ from not spending enough timeÂ amongst nature. As the father studiously works in his study simultaneously watching Mai, she wanders off into the woods where Alice in Wonderland style, she follows some little Totoros, tumbles down a tree hole and plops on top of the balloon bellied Totoro. 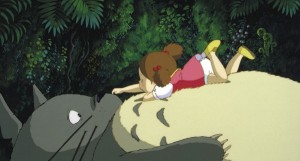 DespiteÂ his enormous size and toothiness â€“ the animation is very toothy -, Totoro is the friendly, comical protector of the forest and of the children that innocently stray into its woods. Â He is helped by the more skittish little Totoroes, who dip in and out of visibility suggesting that they are still learning to trust the little children as the big Totoro does, and a cheshire cat style bus.Â Mai’s father’s lack of parental supervision could be seen negatively, but he explains to the girls’ hisÂ belief that humans used to be friends with the trees so it could be assumed he is aware of the woodland spirits, though as an adult, he can no longer see them. 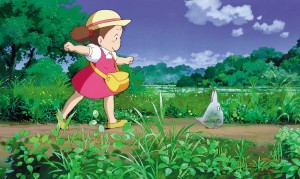 Underneath this innocent little story are some less delightful realities. The girls’ mother appears to suffering from a mental illness and is in a hospital nearby. In one scene the Japanese culture of bathing nude in spas comesÂ as a shock to the usual projection of reserved fatherhood in American children’s movies. 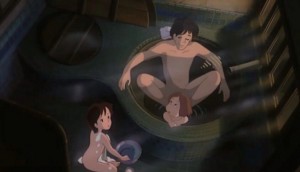 One of the best scenes is when the girls are waiting in the rain with an umbrellaÂ for their father who seems to have missed his usual bus. The simple contrast of the girls’ red umbrella against the darkness is very sweet, and here we are given further insight into Totoro’s character. After comically trying to cover his enormous rotund belly with a leaf, the father’s umbrella is offered to Totoro. Â Whether through absentmindedness or the desire to distract the girls from getting too anxious as they wait, he takes off with the father’s umbrella at the arrival of the cat bus. 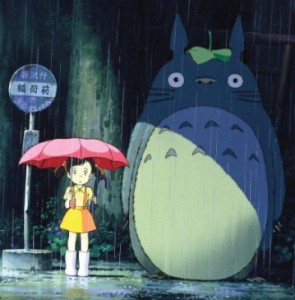 Miyazaki’s characters are starkly realistic for a children’s film. Granny, somewhere in the region of 90 years old, is still â€“ still! – working in the rice paddy fields, wrinkles down to her wooden clogs. In the main story line, the girls are delivered news their mother’s illness has worsened by another child who lives in the neighbourhood and the three childrenÂ are left to deal with an adult situation as best they can. As the older sister, distressed Satsuki cannot deal with the responsibility of little Mai’s tearsÂ as well as her own, and left alone, Mai gets lost trying to visit her mother. 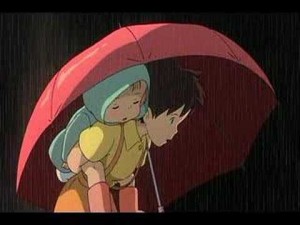 Satsuki soon realises that her selfishnessÂ has caused her little sister’s disappearance and bravely sets out alone looking for her. She comes across a man and his wife travelling in a vehicle, tells them her 4 year sister is missing. Â Instead of offering aid, they drive off telling Satsuki â€œGood luck.â€ Meanwhile, granny has convinced herself that a sandal in the lake is Mai’s and has the village folk comb the water looking for her. When Satsuki returns she confirms that the shoe isn’t Mai’s, and the village folk chastide the distraught granny for getting her facts wrong. 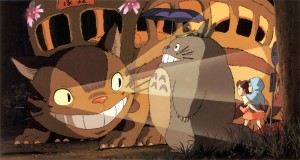 Totoro is clearly a projection of Miyazaki’s belief in Shintoism a religion that has strong connections to the naturual world. As the humans prove to be more and more selfish, Totoro is there to teach the impressionableÂ children balance since the plastic world is pulling the adults further and further away from their familial responsibilities. Throughout the movie the girls find refuge more than once in a Shinto roadside temple, and the creatures present a higher level of morality than the humans. Without reservation, the quiet honesty of this movie while still providing a fantastcial journey for child imaginations, makes this the best children’s movie I have seen.
THE DETAILS
What Cult Japan,Â My Neighbour Totoro