For those who know – parents, grandparents, entertainers – children do not suffer boredomÂ quietly. Something Roald Dahl’s Revolting Rhymes and Dirty Beasts, a Shake and Stir co-production with La Boite from Roald Dahl’s Revolting Rhymes, understands. Popping up out of the hollow round stage, the four actors – Leon Cain, Judy Hainsworth, Nelle Lee, Nick Skubij – repeatedly sass the audience with Roald Dahl’s rebellious poetry and language. Swallowing up actors and ejecting props,the stage is figuratively and physically centre stage, acting as though it is one of Dahl’s dirty beasts. As they continuously move around the stage, I can’t decide if the actors’ colourful costumes are bohemian or steam-punk inspired, but the play looks very hipster. 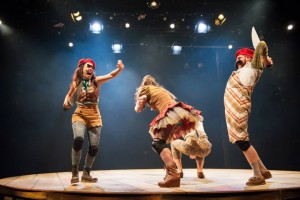 What makes this show truly fantastic for the adult audience is that every nuance of Dahl’s rhymes have been extracted. With great skill and attention, the essence of Dahl’s naughty wit and fairy-tale character parodyÂ is maintained without the play becoming offensive. Feminist undercurrents in Dahl’s Cinderella, Red Riding Hood, Snow White, animal rightsÂ in the story of The Three Little Pigs and the domestic scenes Dahl uses to undermine adult authority are made obvious through theÂ acting. Partly this is because to adapt verses such as â€œOff with her head, the prince repliedâ€ to a screen play, the actor must play both omniscent narrator and story character. Giving the actors full control over the characters they play eliminates ambuity around meaning. And this creates perfect clarity for the child auidence as well. The producers have also taken care in editing out and changing parts of Dahl’s original verse so that it is less crude and gruesome. Gory scenes are carefully choreographed, and with the aid of visually distracting strobe lights and pyrotechnics, the violence is reabsorbed into comedy. 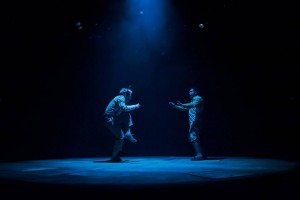 There are eight stories in total, an additional two added to the six published in Roald Dahl’s Revolting Rhymes (1982). During the two stories that were not in Dahl’s Rhymes the production lulled. One of the reasons is that unlike the Revolting Rhymes, for these two stories the narration is scripted separately from the character’s lines causing loss of momentum. The actor-narrator is distractingly visually separated from the stage also. The two stories are well placed amongst the other rhymes and I think without them to act as a pause in the 55 minute production, we all would have been too zapped of energy to make it home. 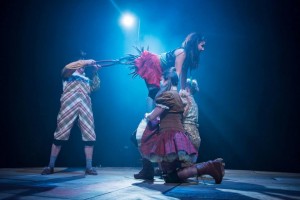 The audience is packed with a healthy sum of children, mothers, and grandparents and it is hard to imagine this same demographyÂ equally happy at the movies. The fourth wall isÂ broken, child and adult are blended into one childish audience. Everything seems to have shifted. Amongst the audience, I sense a feeling of togetherness atÂ havingÂ made it out alive. This is the magic of the theatre. 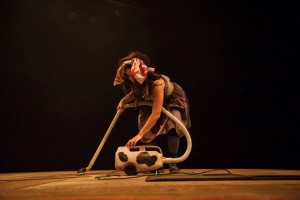 I pass a little boy talking to his mother as I’m leaving. â€œWhat do you think Roald Dahl would’ve thought of that mum, if he’d been alive?â€

â€œI think he would have been very happy with that,â€ said his mum.