Russell Brand tries his hand at politics and stirring up anarchy in his third novel “Revolution”, but even to a seasoned fan it’s a bit of a self-important slog.

I’m a long-term Rusty fan – I fell in love with him as many did when he strode onto the worldwide comedy scene in eyeliner, drainpipe jeans and sporting his own brand of old-timey eloquence. It was his hilarious sendup of the British tabloid culture here that truly won me over – was it really seven years ago? Even that short anecdote illustrates the best about the man – Russell Brand is truly more than just a teller of dick jokes, but tries valiantly and sincerely to do the job of the best comedian and writer – to critique the world we live in and to unearth the sinister mechanisms in which we are all functioning cogs within. 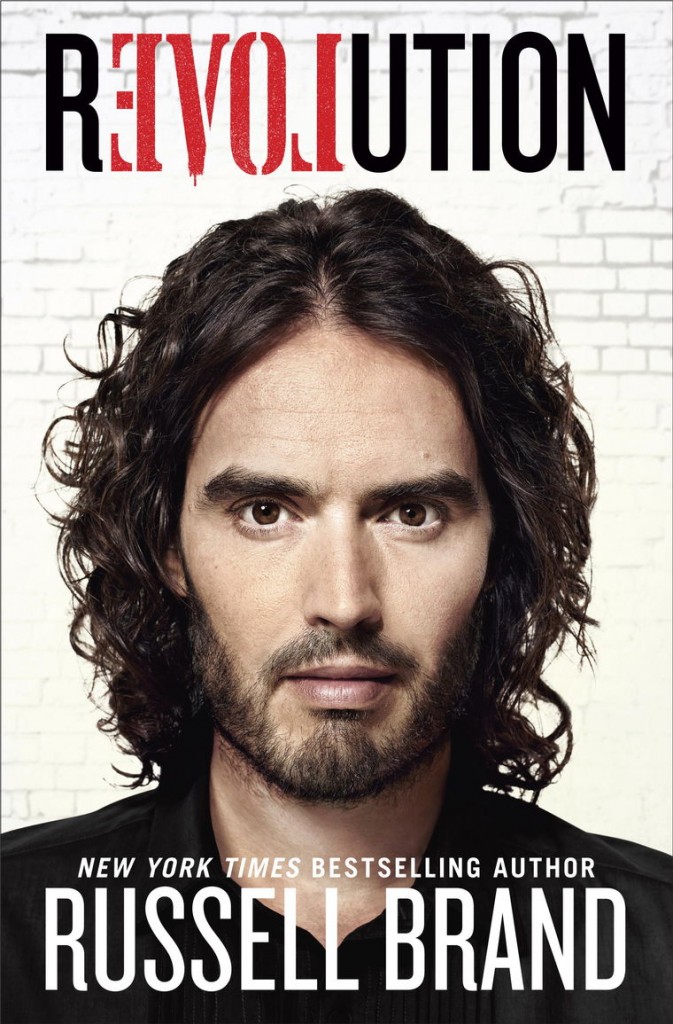 He carries on this legacy in Revolution, a novel thatâ€™s likely to have had its beginnings in his recent series of politically charged interviews and articles. On actuallyÂ­Â­ reading his latest offering however, Iâ€™m left believing that his brilliance might be best left bared in shorter form, however, as Revolution â€“ printed, of course, with a large portrait of him looking a bit like Jesus on the froÂ­Â­Â­nt cover, proves itself to be somewhat lost in translation.

While his first novel, the autobiography My Booky Wook, was a poignant romp through his humble beginnings and rise to the top peppered with anecdotes almost too funny to be believed from his drunken egotistical days as a theatre student, Iâ€™d found its sequel, the unimaginatively titled Booky Wook 2 to be a dreary feast of name-dropping and cab rides.

Revolution begins promisingly with a merry lampoon, describing political interviewer Jeremy Paxman as a “somnolent croc” â€“ he is a very funny man with charisma to spare and a truly tickling way with words. Still, I was sad to note my interest waning quickly as the book progress to overly vague details of how this “revolution” should take place overshadowed by Brand’s mammoth persona, much like how I imagine it would be to sit behind his gigantic back-combed tower of hair in a cinema.

He drives home simple truths (for instance, that poverty is bad) in far more words than necessary and it all feels condescending and hollow, but I donâ€™t really know what I expected. Tells me little I didnâ€™t already know, and grudgingly exposing a truth I think I already knew about Brand â€“ his targets are easy. Heâ€™s often lauded for taking down the Westboro Baptist Church in his hilarious â€œthe Holy Spirit ainâ€™t got a pen!â€ â€“ who doesnâ€™t hate them â€“ or confounding hapless American news anchors with long words.

I do still enjoy his very queer, poetic style of prose – though again itâ€™s only really tolerable in small doses – heâ€™s really the only one who can get away with figurative language like â€œTwo uncomfortable certainties, though, loiter like bailiffs manacling the bonhomieâ€.

You can just see his editor shrugging and sighing â€œall right then mate, you clearly know what youâ€™re doingâ€.

Honestly, though, Iâ€™d recommend the latest Stephen Fry if you wanted a stocking stuffer by a Brit thatâ€™s guaranteed to please, or a good sit-down with one of his brilliant standup shows if you’ve absolutely got to have some Russell. I still love you, Rusty, I just sort of want my $35 back. Perhaps we can discuss it over dinner.