A new cafÃ© is always going to have its shortcomings, but Shouk is pitching a new and innovative genre that won't disappoint.

Shouk Cafe focuses on Israeli cuisine, a unique facet of the Mediterranean trend which is the first of its kind in Brisbane.

Shouk means ‘marketplace’ in Hebrew and Arabic. The ‘shuk’ is not just a farmer’s market. It provides a vibrant, bustling backdrop to eating, drinking coffee, socialising and playing backgammon.

This is the first cafÃ© for Brisbane-based owners Adi and Guy.Â Food is deeply embedded in the lives of Middle-Eastern people, and Shouk Cafe aim to embody this passion in their Brisbane cafÃ©. Owners Adi and Guy were influenced by the feeling of the marketplace in Israel which are home a diverse collection of cuisines, such as Eastern European, Iraqui, Israeli and more.

Shouk Cafe does lack that distinctive atmosphere of a real shuk where the air is dense with heat, noise and assorted scents but doesn’t have the atmosphere of the standard Paddington cafÃ© either.

Perhaps it is the bookshelf that is home to intricate pottery and Middle-Eastern cookbooks including the works of Ottolenghi, author of Mediterranean cult-classic ‘Jerusalem’. Or the Middle-Eastern music faintly jingling in the background. Perhaps it is the warm greeting from the team of attentive, accommodating waitstaff? All these factors create Shouk’s offbeat and relaxed feel which Â beat other Paddington institutions to the ground.

I was eager to try Shouk because I have spent some time living and eating in wonderful Israel and also because my dad makes an unrivalled hummus. The soft launch 2014 menu showcases many Israeli, Jewish and Middle-Eastern favourites – shakshouka, the classic Israeli breakfast, latkes (potato pancakes), and crepes, all with no shortage of cumin, sumac and other unique spices. 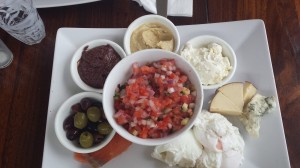 We tried the Israeli breakfast for two, shakshouka with merguez and the corn and zucchini fritters. The Israeli breakfast was very generous in size, and came with warm bread and pastries. The Israeli salad was described as “too oniony” by some, but as an onion lover it sat well with me. It also came with three delicious cheeses, olives, olive spread and hummus. We all had a gripe with the hummus. It didn’t taste like Israel, or anything else except the packaged stuff. Also, the shakshouka eggs were hard, which is practically sacrilege. 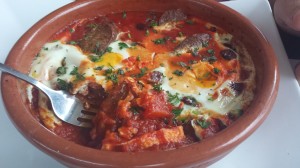 Shakshouka at Shouk. Image by Gabbi

We also experienced coffee confusion, which is never fun.

In saying all this, the waitstaff were laid back and good humoured about our queries. We also experienced their willingness to chase after forgetful customers who left their bags behind (ahem).

Adi and Guy also graciously received our feedback and come on… it’s been open 15 days.

If you haven’t yet, head to Shouk CafÃ© and flaunt with foreign Middle-Eastern flavours.

Although they’re still finding their feet, you really can get lost in Shouk’s inviting atmosphere.

A new cafÃ© is always going to have its shortcomings, but Shouk is pitching a new and innovative genre that won't disappoint.
Share on Facebook Tweet This Share on Google Plus Pin This Email This