Review: The Man Who Came to Dinner

Director Jennifer Flowers is doubtlessly one of Brisbaneâ€™s best theatre assets. Fresh off a knock-out run of Sex With Strangers over at the Powerhouse, she has brought her considerable talent to bear on The Man Who Came To Dinner and turned out a highly professional production. She is joined on the show by designer Bill Haycock, whose similarly glowing resume has seen him work with La Boite, QTC, both state and national Ballets, and countless others on over 150 productions. Again, his hand is evident in the showâ€™s unstinting set and costuming, which so typifies the â€˜box setâ€™ of the period farce.

Backed by this dynamic team, the QUT students have made a fine debut onto the professional scene, and their contribution should on no accounts be overlooked. The cast are unswervingly professional, and their force of numbers (which made for very limited doubling) gave the production an opulent and well-rounded feel. More importantly, however, such a large and skilled collective can afford to focus considerable attention on each character in Kaufman and Hartâ€™s large line-up, allowing each to reach their fullest, most farcical potential. Despite the overall quality of the cast, however, there are some definite standouts. 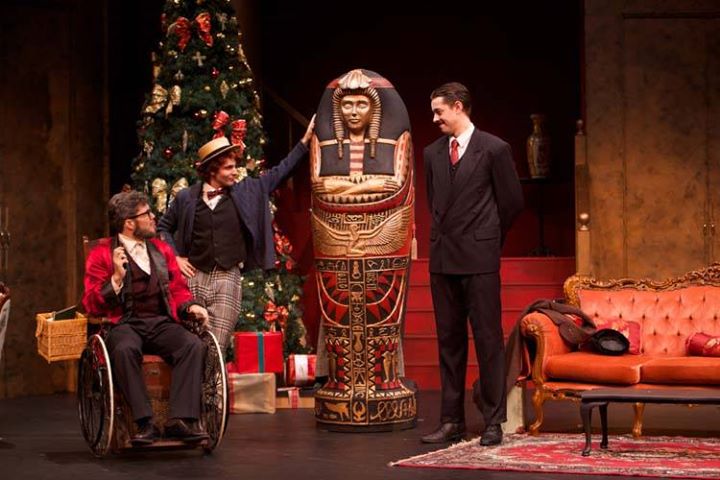 Jasper Foley is commendable as Sheridan Whiteside, a tremendously demanding role despite the greater part of it being played from a wheelchair. His melodramatic socialite affectations never falter, and he embodies the larger-than-life Whiteside with incredible vigour. Sophie Dillman (as Lorraine Sheldon) must also be credited for her incredible on-stage meltdown, and for keeping the audience firmly engaged in a rather long first act.

However, the show was thoroughly stolen by Rowan Chapman, whose impeccable timing and great gift for comedy was to plain to see in a number of walk-on roles. However, it was his effortless and flawless performance as the dandified Beverly Carlton that was (by the sound of the stalls) the highlight of the show. Undoubtedly, here is a man to watch in future.

The Man Who Came to Dinner is a fantastic play to talent-spot in; for a very low price you can not only enjoy a riotous night at the theatre, but reserve for yourself the ability to point at the stars of the stage and say you saw them when. The Man Who Came to Dinner is playing for a very limited season, so be sure to get along to Gardens Theatre quickly.

What The Man Who Came to Dinner

For tickets or more information, go to QUTâ€™s website here.

An Interview with ‘The Voice Guy’ – Torb Pedersen