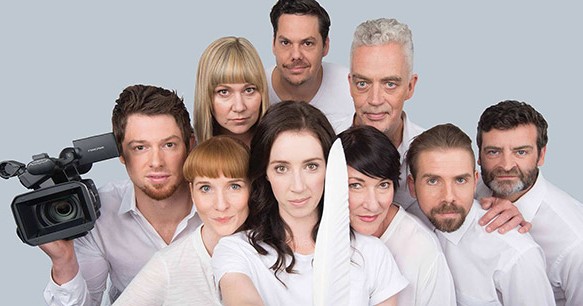 As part of this yearâ€™s Brisbane Festival, Queensland Theatre Company presents a contemporary version of Anton Chekhovâ€™s The Seagull. This latest production, adapted and directed by Daniel Evans is as meaningful as it is daring.

I would forgive audiences for being weary of The Seagull. This latest production is by far one of the riskiest plays that Queensland Theatre Company has staged this year. Written in 1895 by Russian playwright Anton Chekhov, the play is well known for being tedious, long and in recent years, overdone. However, award-winning director Daniel Evans jolts his audience awake with an unexpected burst of energy from his ensemble of actors.

Instead of being set in Russia, Evanâ€™s revival is set in contemporary Australia. Fans of the original, fear not – all of the themes and characters are still very much alive. The play begins as famed but fading theatrical diva Irina brings her entourage â€“ including her lover, the writer Trigorin and tortured avant-garde playwright son Konstantin – to seek solace at her brotherâ€™s country hideaway. However, she unknowingly sets alight a powder keg of repressed emotions. Flames of passion are ignited and extinguished, and the soaring ambitions of this family and the people they love are tested against lifeâ€™s brutal realities.

This version is set in 2015 although surprisingly Chekhov’s world feels fitting for a contemporary Australian landscape. Evans has maintained fidelity to the original’s play key events, themes, stakes and anxieties while tinkering with a couple of strands in the play’s DNA.

Evans beautifully directs a cast of ten talented actors in this contemporary version of the classic.  All of the actors played their roles with fierce determination that captured the heartbreaking sadness of their lives. The scenes between Konstantin (Nicholas Gell) and his mother Irina (Christen O’Leary) were particularly powerful. The Seagull is Gell’s debut with the Queensland Theatre Company and I can only hope we see more of him in the near future. Christen O’Leary was certainly not afraid to jump straight into the role as Irina as she drunkenly danced, groped and cried for much of the first half.

The second act switched mood from comedic madness to suicidal despair as a storm of tragedy hits the tormented and dysfunctional family. Lighting Designer Ben Hughes and Sound Designer Guy Webster create an atmosphere that is at time uncomfortable for the audience. The music blares as the characters run around the stage like headless chickens and the lights flicker uncontrollably.   Brace yourself for the usual Chekhov ending. Hint â€“ they donâ€™t live happily ever after.

For more information or tickets, head to QTC’s website here.