Love Conquers All in Amma Asante's 'A United Kingdom'

A couple caught between the politics of two nations, David Oyelowo and Rosamund Pike star in Amma Asanteâ€™s A United Kingdom, a stirring romantic-drama about a defying love.

In 1947, the Prince of Bechuanaland (now known as Botswana), Seretse Khama (Oyelowo) meets Englishwoman, Ruth Williams (Pike) at a London dance. Drawn to each other, they fall in love and marry despite the objections. The couple anticipate their marriage will bring difficulties but they do not expect the reactionary manoeuvrings of the British government that attempts to break their union. At a time when Bechuanaland is a protectorate of Britain and apartheid law (systemized segregation) newly introduced, the couple defy the orders of two countries. 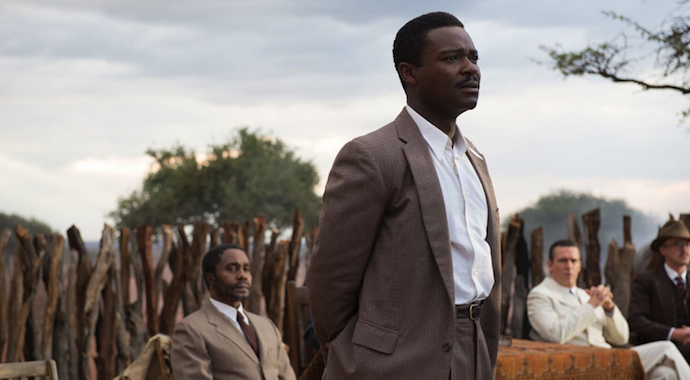 Grounded in truth, A United Kingdom tells the inspiring story of real figures in history, of how Seretse and Ruth not only challenged racial discrimination but prompted change. Their marriage is a partnership defiant of the time. This solidarity is shown when Ruth declines a gin and tonic because her husband is prohibited from consuming alcohol in Bechuanaland and when Seretse halts a British politician from dismissing his wife from their conversation because of her gender.

Director Amma Asante makes an unsettling time in history a pleasing tale of triumph. Less concerned with complexity and nuance, the film firmly defines the moral boundaries. Jack Davenport and Tom Felton are cast as the clear-cut villains – both entirely convincing as the unsavoury British suits, men who enflame when they speak poisonous bigotry with authority. The film doesnâ€™t break new ground or challenge audiences, but instead offers a â€˜love conquers allâ€™ tale. The strong performances from Oyelowo and Pike, ensures that audiences will delight in their conquering.