Reading the book before the film or theatre adaptation has many critical advantages. The Untouchable Juli, isÂ a book by Australian novelist James Aldridge – but it is not available at the Brisbane City Council Libraries and I don’t have time to order one before attendingÂ Fractal Theatre’s adaptation of the same nameÂ on 30 July 2015 atÂ Elysium Theatre,Â in Sandgate Town Hall. 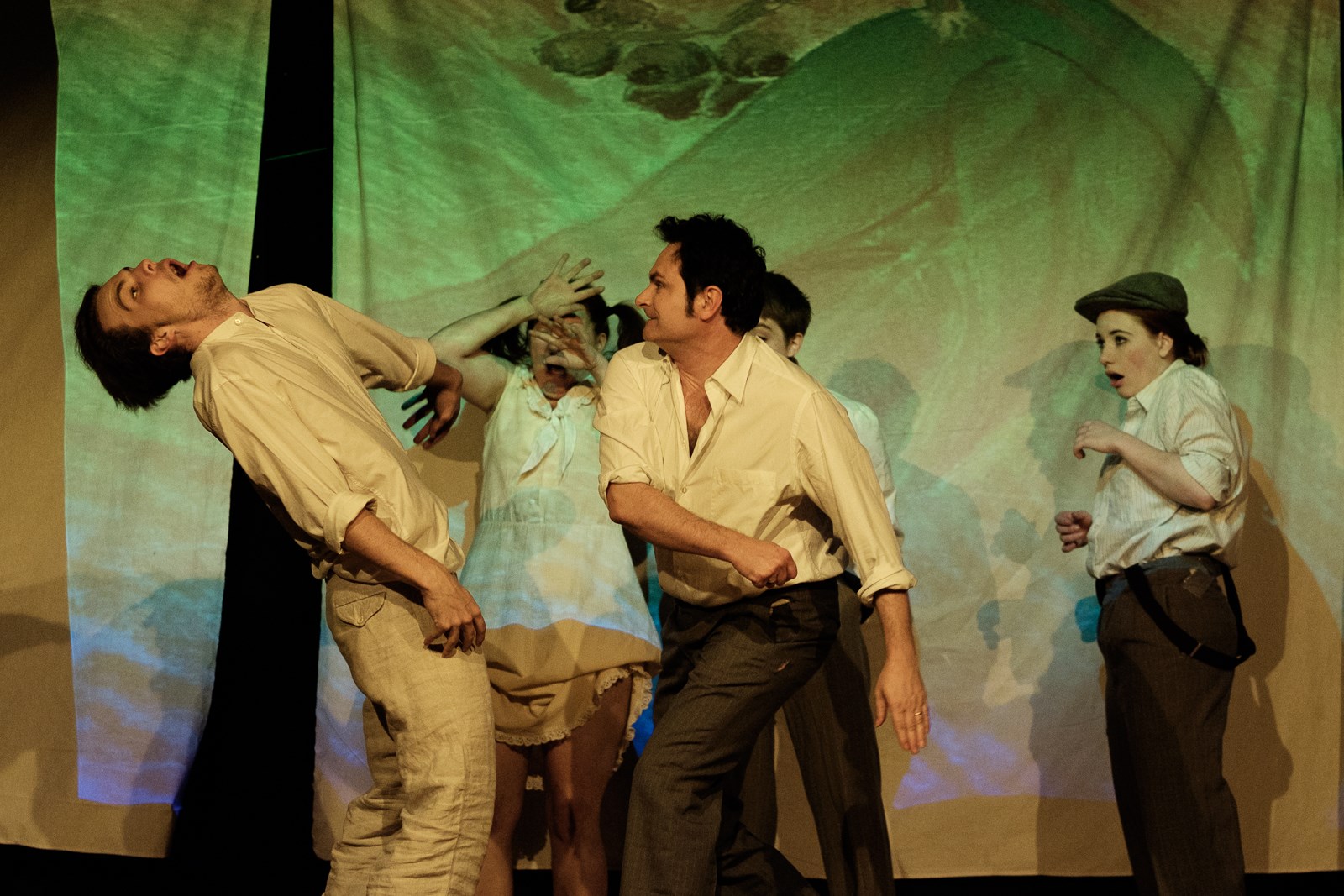 The story though, is familiarÂ in some respects. Based during Australia’s depression in a small country town that has small town ideas, Juli (played by Samuel Valentine), is immediately placed at a disadvantage – who calls their son Juli, seriously? Not since Sue’s father in Johnny Cash’s A Boy Named Sue has a parent been so cruel.Â  He is brought up by his Â mother Mrs Christo (Gertrude Benjamin), a character who plays upÂ the notion that she is perhaps notÂ in fact his mother at all. Â Her background is dubious to say the least butÂ amongst the intolerant community, she finds her place as a Christian zealot. Â As the play opens though, you realise Juli has wound up in the justice system, though you don’t know why. Â It is easy to start to see why this story has been called Australia’s To Kill a Mockingbird.

Spanning time from when Juli is a boy to adulthood, the play focuses on Juli becoming aware of who he is, which is in no way to the person he is supposed to be in this town and they act accordingly by trying to suppress the musical and mathematicalÂ genius withÂ fire and brimstone Christian teachings. 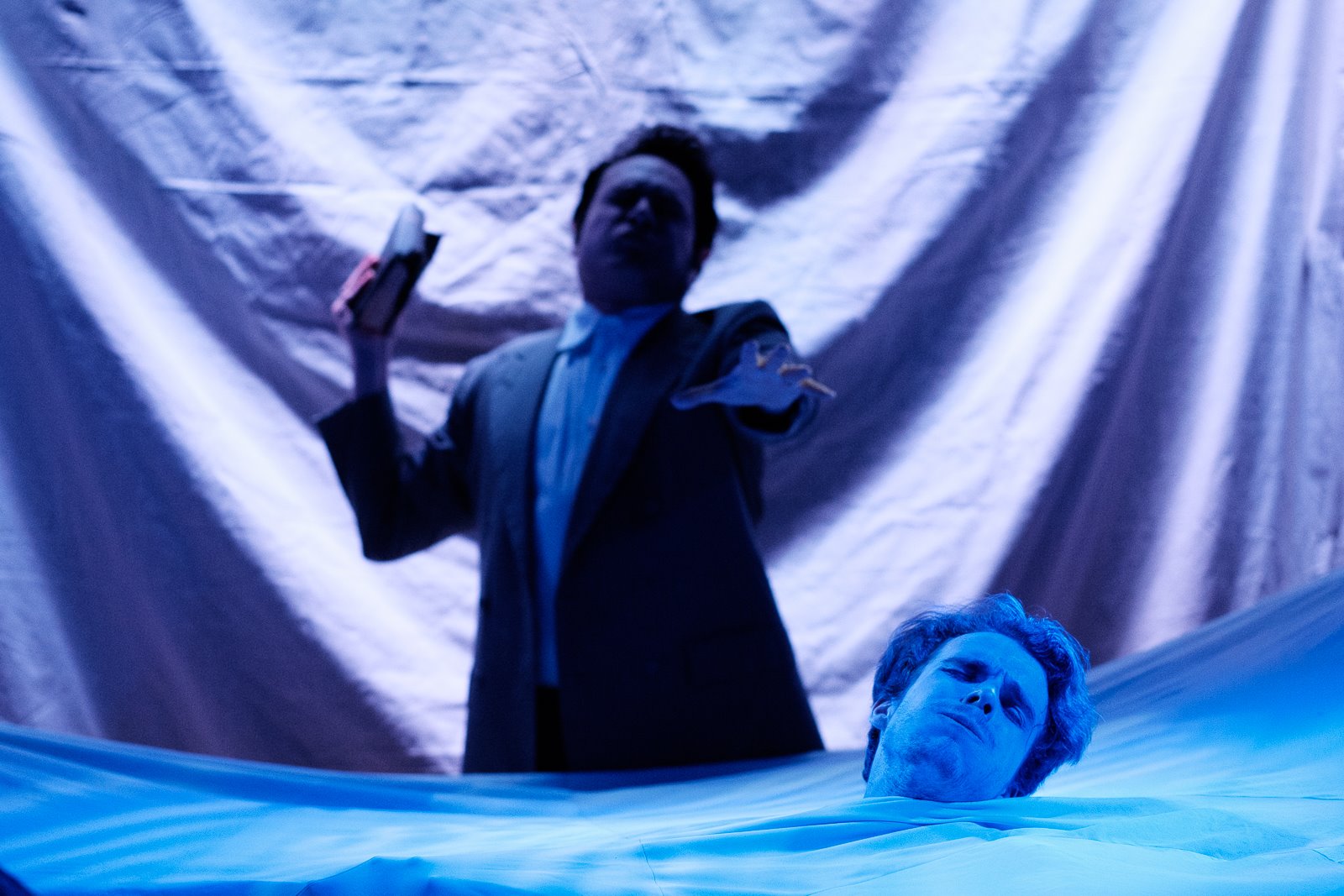 The script needs to be fast paced to cover the time spans of Juli’s life. Â To do this, Brenna Lee-Cooney cleverly layers stories, which quickly loose me as I struggle to work out who the characters are. This is especiallyÂ confusing at first given some actors play multiple roles. The narratorÂ Â (played by Eamonn Clohesy) weaves in an out of the play as a character within and without the story. Â However, it doesn’t take long to find a foothold once the characters evolve. Â In another scene, Juli (played by Samuel Valentine), the central character sits unknowing on the stage edge as behind him events that will affect his future unfold. Â As Juli sits blissfully unaware, the audienceÂ are held in the tenseÂ knowledge thatÂ his fate is being established contrary to his will. 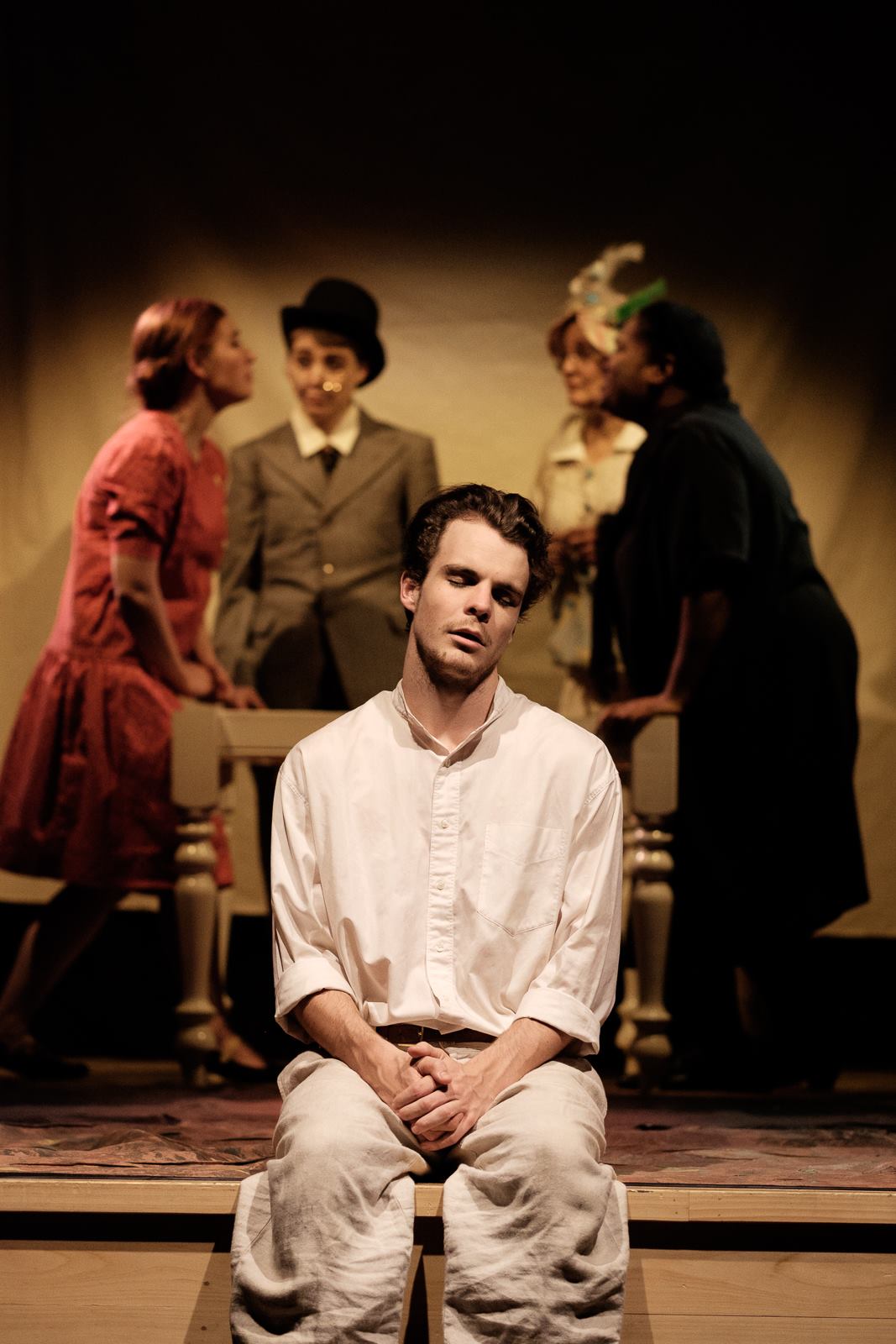 The script alsoÂ uses mime intwined with other visual props. Â You are required to imagine pies and sausagesÂ in the hands of Mrs Chisto, a loaf of communal bread being ceremoniously broken, and the squeaky bicycle that the policeman (played by Sandro Colarelli) uses to arrest Juli. 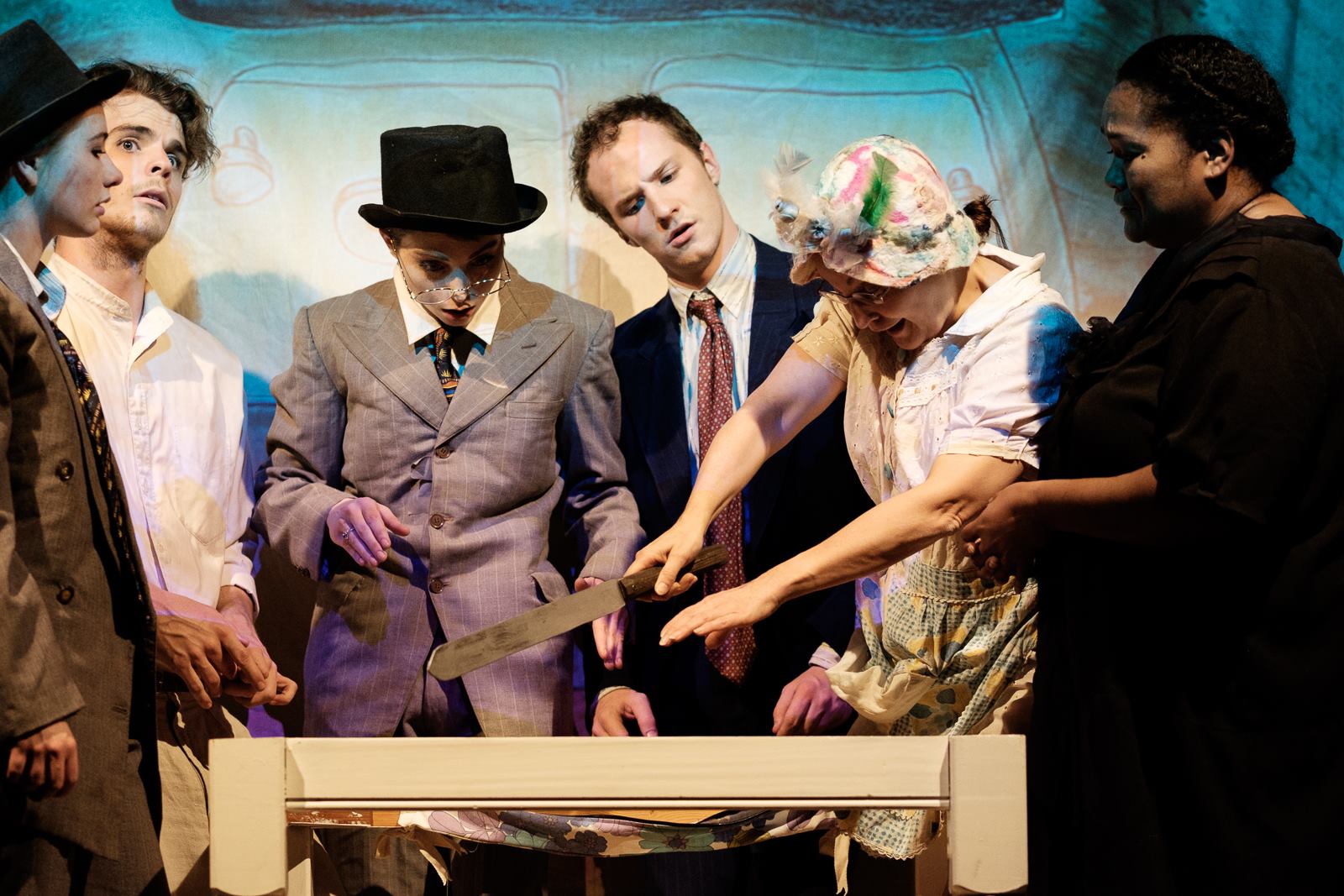 Opening up the imagination in this way insists that you become fully involved in the story and all external happenings, including the town hall clock chiming, disappear. Â This also works because the play is performed without interval so there is no escape once you are inside the head of Brenna’s world inÂ The Untouchable Juli. 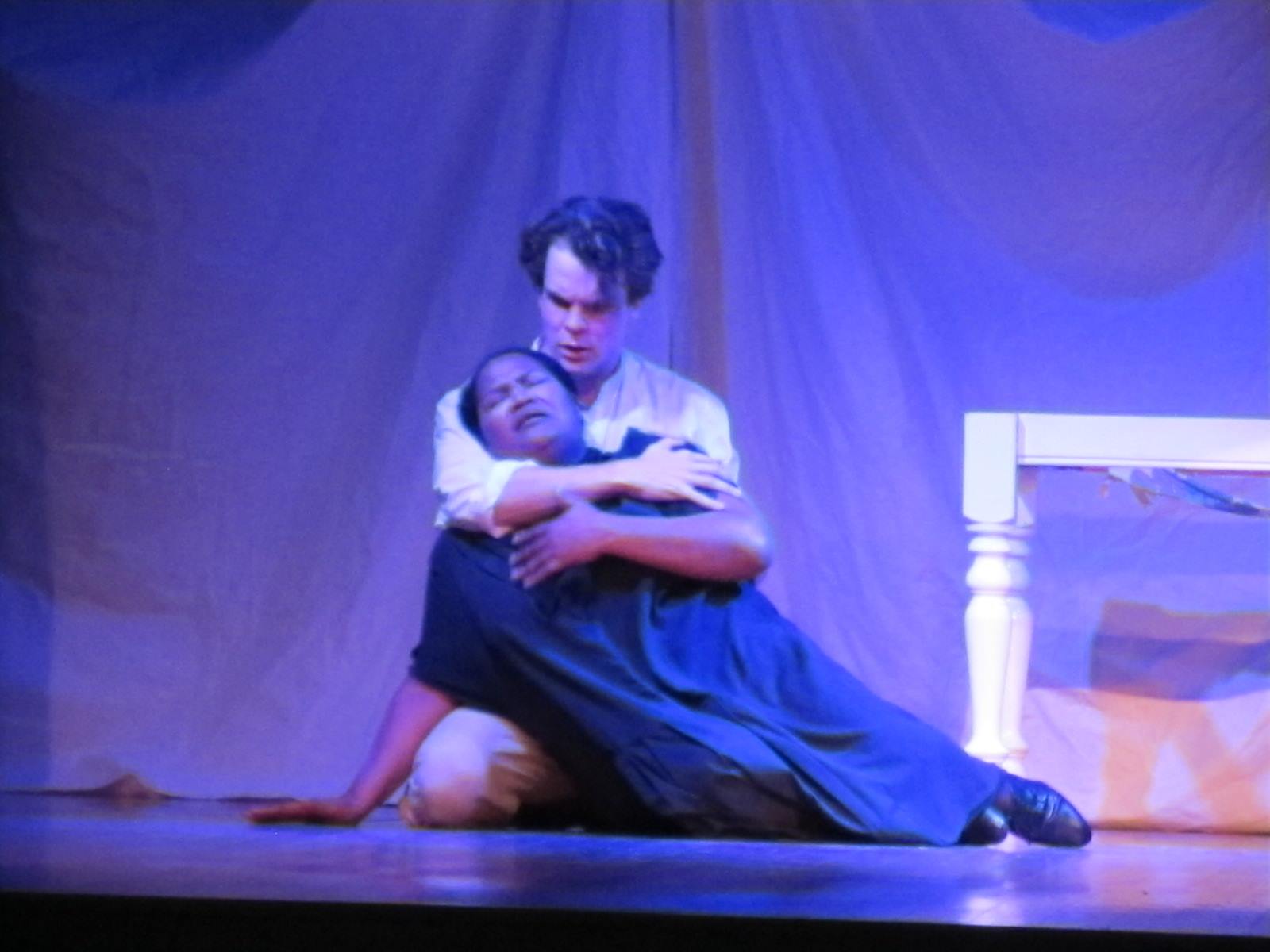 Not reading the book had the major advantage of a surprise ending. Â The humour had led me to believe that this story would end happily with Juli marrying the only girl who showed him understanding, and living happily ever after. This in part does happen, Juli does get the girl, but in the midst of circumstances so tragic that the final scene where Samuel Valentine as Juli robotically hacks away at the invisible carcass on the butchers bench, haunts you long after the actors final bow has been taken.