Discworld comes alive at the Brisbane Arts Theatre, as Wyrd Sisters condenses all the brilliance and wit of a Pratchett novel into a two-hour romp through the trials and tribulations of meddling in monarchical affairs.

Firstly, I have a confession to make: I have never actually read Sir Terry Pratchett. However, as soon as I took my seat, I was delighted to discover that not only did this in no way impede my enjoyment, but that I could finally understand what all my Pratchett-reading friends were talking about.

Wyrd Sisters is an absolute gemâ€”perfectly pitched, hysterically funny, and deeply, deeply clever. The script bounces effortlessly from slapstick violence to theatrical in-jokes to astute political satire as Discworld is brought to the stage. As in the novel, not-so-wicked witches Granny Weatherwax, Nanny Ogg and Magrat Garlick turn tradition on its head as they struggle to deliver Lancre from the usurping Duke (a man possessed of a commendable Shakespearean madness and a cheese-grater) and restore it to young Tomjon, the rightful (infant) king. 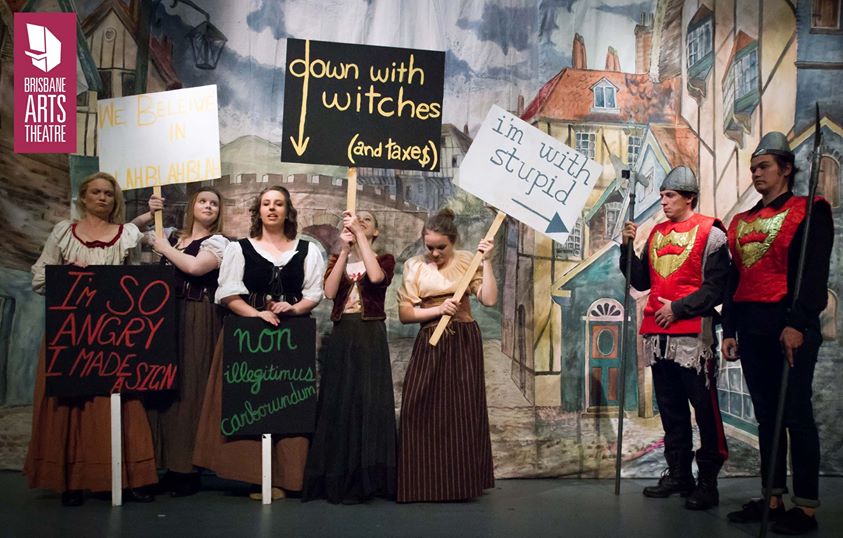 Brisbane Arts Theatre has pulled together a diverse cast for its final production of the year, and the depth and breadth of their comedic chops is truly impressive. From Magratâ€™s (Gabby Carbon) hilariously elastic facial expressions, to the elder Tomjonâ€™s (Daren King) Basil Fawlty-esque rage, to the Foolâ€™s (Michael Stent) cringing giggling, the company shines. A special mention must go to John Grey, whose sardonic Granny Weatherwax would have stolen the show if not for such stiff competition from the rest of the ensemble.

Yes, the set still bears some vestiges of its budget (the shower curtain scenery changes are a perennial favourite), but the joy and spirit of the play rise above such minor imperfections, and the magic of the evening is irresistible.

Wyrd Sisters sparkles with self-referential laughs and pop-culture puns, and embodies all the freshness and smarts that have earned Pratchett a cult following. This production is definitely one to see.

Tickets can be purchased hereÂ or student rush tickets are available at the door immediately before the show.

A little Bit Of New York Coming To Melbourne