Rick Hayward and Emily Devers are the Brisbane based artists behind Frank and Mimi. Known for their hand letting and graphic design balance, Frank and Mimi are behind large scale painting in most Australian cities. The Creative Issue caught up with Rick Hayward regarding their practice and Rick’s upcoming involvement in the Maroochy Music and Visual Arts Festival.

The Creative Issue: Since commencing Frank and Mimi, how has the art scene changed for freelancers?

Rick Hayward: There’s certainly been a surge in interest and popularity of mural art and all things handmade, we’ve been fortunate in having established our studio early in that surge and being able to build from there.

TCI: Frank and Mimi use environmentally responsible paints and have previously collaborated with environmental focused events such as the Sea Walls festival. How does this relate to your personal beliefs?

RH: Em and I share similar values and deep respect for our planet on the whole, we realised this from the moment we met in a health food store. Frank & Mimi has been an extension of our values,Â providing us the opportunity to express ideas through considered mediums whilst being conscious of being responsibleÂ consumers.

TCI: Are there challenges in sourcing environmentally responsible paints?

RH:Â There are a number of options out thereÂ across bothÂ aerosol and acrylic paints, we’ve stuck with one brand of acrylic house paint in particular that values their environmental footprint and makes a quality product. There is still compromise given that the paint is essentially liquid plastic, but we are able to minimiseÂ wastage by reusing and remixing leftover colours from project to project and reusing or recycling the tins.

TCI: How has your background as a sign writer impacted your current art practice?

RH:Â My trade background streamlined our approach early on, from drafting and preparation through to installation. It was great to have the technical ability andÂ experience in painting large scale before starting Frank & Mimi.Â I’m absolutely influenced by traditional sign writing aesthetically, and am working towards developing myÂ work further stylistically and conceptually.Â I’ve essentially apprenticed with Em in thinking like an artist, and still with a long way to go but am excited to explore it further. 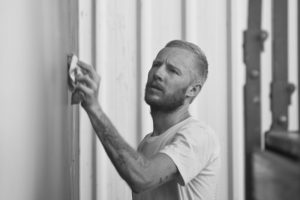 Rick Hayward of Frank and Mimi

TCI: Does hand lettering have a greater significance to you than set typography?

RH:Â Hand lettering from the hand of a sign writer isÂ definitely significant to me, I have a real appreciation for reallyÂ traditional signÂ writer letter styles that flow naturally from a brush. I also loveÂ the “imperfection” of hand lettering, it can have a veryÂ wabi-sabiÂ appeal and a sense of character that can’t be easily reproduced in set typography.

TCI: Do you and Emily, your partner in Frank and Mimi, have similar artistic views?

RH:Â I’d say we have similar views which have contributed to us working together for the last few years. We are both currently investing more time in developing our own styles, which may begin toÂ reflect more independent views considering that we’ve shared the same lens for quite a while.

TCI: This year Frank and Mimi have contributed to the Wonderwalls Festival in Port Adelaide and the First Coast Festival in Toowoomba. What was the inspiration for these works?

RH:Â Wonderwalls was our first opportunity to paint independently at a public art festival, however we both worked with ideas around environmental concerns. My typographic piece is a phraseÂ reflecting on the importance of a rightÂ relationship with the earth, suggesting thatÂ collectively humanity is either not aware of, or is ignorant to theÂ deterioratingÂ state of our planet. My First Coat artwork was more of a personalÂ response toÂ emotionalÂ challenges everyÂ individual faces, and that were weighing on my mind at that time. 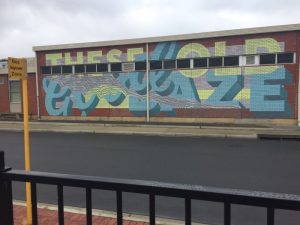 TCI: How do you balance the workload of designing artworks, client meetings and travelling for festivals?

RH:Â Last year wasÂ definitely challenging in this regard as we wereÂ taking on as much as we could which nearly burnt us both out. This year we’re spending more time planning out our calendar to allow for drafting time and down time, although the next six months is looking pretty choka-block. We’re justÂ grateful to have so many exciting things come into the email and it’s hard to say no sometimes!

TCI: What do you have in store for the Maroochy Music and Visual Arts Festival this year?

RH:Â I’ll be painting at the festival solo this year so it’ll be a typographic piece,Â further exploring the human condition and delving into the psyche of festival patrons on their journey between sets.

TCI: How does the festival experience compare to client work?

What: Rick Hayward ofÂ Frank and Mimi at the Maroochy Music and Visual Arts Festival 2017