Lights out, the mass kicks in, strobe lights on, stage begins to rise and the audience waits with bated breath. A crew of leather clad backup dances appear and the man himself enters from above. Ricky Martin you owned that stage!

Last night I was treated to Ricky Martinâ€™s One World Tour at Brisbane Entertainment Centre, presented by Nine Live and Sony Music Entertainment.

Thanks to Visa Entertainment I was able to use my debit card at the bar for drinks, food and merchandise before the show kicked off. Treated to some good old concert going hot chips, chicken panini and wine as my friend and I loosened up for a great night.

Iâ€™m not what you would call a fan but Delta Goodremâ€™s opening act went far beyond my expectations. Deltaâ€™s vocals are faultless and her fingers dance like angels across the ebony and ivory. Opening with Sitting on Top of the World her whole set was filled with highs and lows, a sing-a-long Born to Try and emotional new material. It was all about endearing conversational interludes and breathtaking notes. Bare foot performing and casually addressing the audience, Goodrem made me feel like a friend sitting in her backyard. Her half hour performance proved she is one talented and beautiful artist. 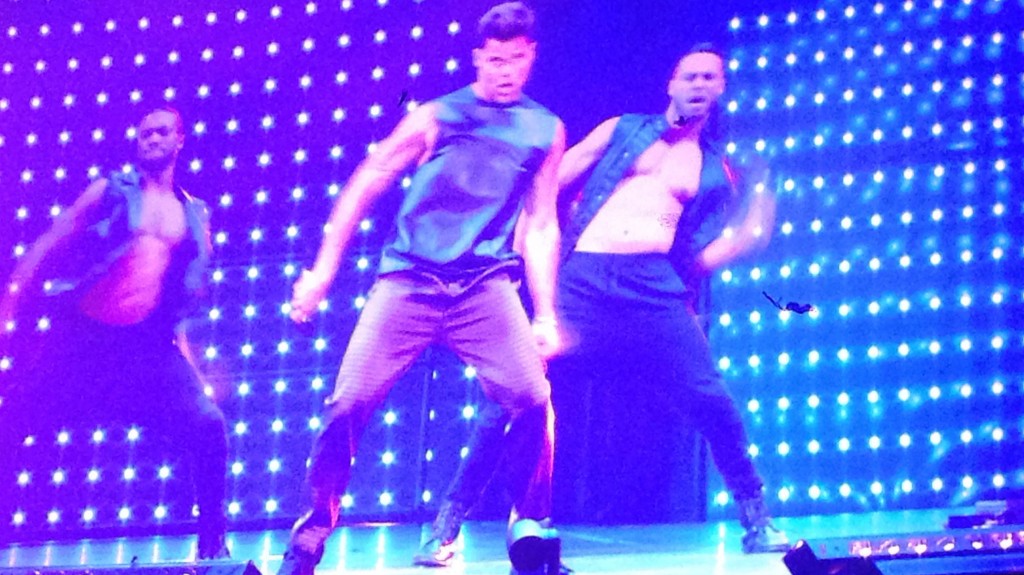 After a half hour interval the Puerto Rican born star didn’t make us wait as he took to the stage with a rock star entrance. Singing renditions to hit songs from the golden era that was the 90s to his more recent songs, Martin performed his socks off. And even though I wasn’t familiar with a lot of the set list, I was enjoying the surprise. After a stellar opening act, Martin addressed the audience with his hopes for the night: he wished us love, passion, fun and dance. I was so ready to get up off my seat and salsa.

Livinâ€™ La Vida Loca on top of an old Mustang was of course one of the highlights of the night. No wonder this song is often referred to as the start of the Latin pop revolution because he sure as hell made me want to leap and live the crazy life and go dancing in the rain. Shake Your Bon Bon ensued and boy did Martin shake it. Martin performed an intriguing slow tempo almost grunge like rendition of his hit song She Bangs and I was left feeling a little underwhelmed. But his on stage presence still had me hooked in. 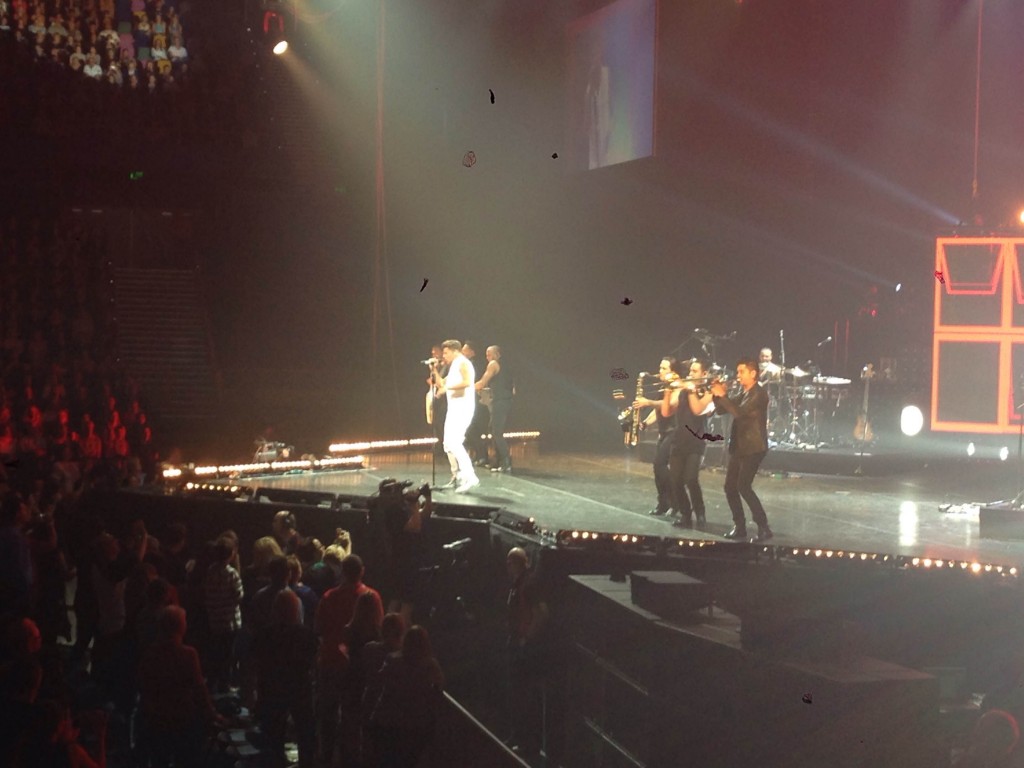 Midway the mood sombred as ballads ensued. Martin introduced 2014 The Voice contestant Jackson Thomas as a proud father would. Martin let Jackson take centre stage and I found myself surprised at his visible emotion and respect for future artists and raw talent. Together they wooed the audience with a moving rendition of Sheâ€™s All I Ever Had.

Goodrem emerged upstage centre on a high podium as Martin looked back at her with admiration. Martin and Goodremâ€™s two duets were a breath of fresh air and their adorable friendship shone through as they sung two ballads Private Emotion and Nobody Wants to Be Alone . 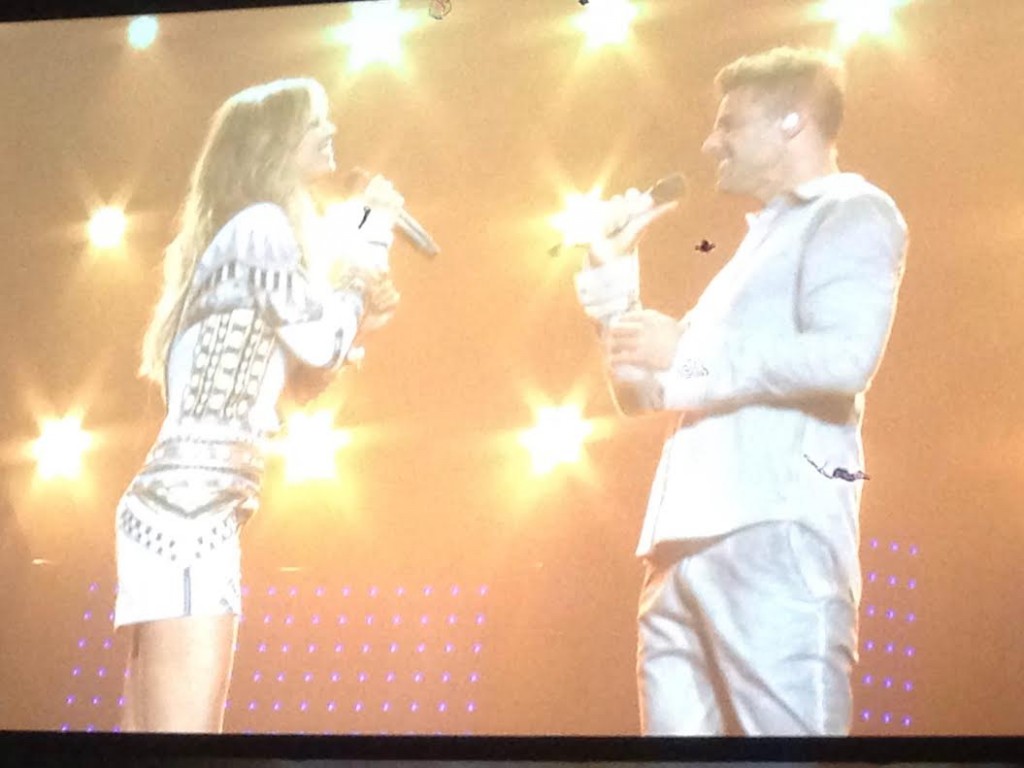 Delta and Ricky performing a duet

Back to the upbeat tempo, the crowd was on their feet in an instant as Ricky commanded us to dance â€œlike you donâ€™t careâ€. Leading the crowd in a round robbin of dance moves and “Oles” Martin performs with a staggering level of enthusiasm and passion packed full of energy and a sense of respect. Spiritually lost in the music, Martinâ€™s Buddhist beliefs often emerge in his performances with a ballad sung in front of screens displaying children in need in support of ending child trafficking, Martin is an artist who cares.

He said goodnight but I was a buzz with adrenaline, I was seeking more Ricky, joining in with the crowd also yearning for more! As the stage came a live one last time, the man burst into a final carnivale style frenzy of his catchy, energetic 1998 World Cup song The Cup of Life. The audience were up on their feet, it felt like I was back in South America, dancing among the bright lights of Rio.

His backup dancers and band members were equally beguiling and Martin had a great rapport with them. Martinâ€™s ability to engage the crowd deserves monumental praise, and his Latino sex appeal oozes with his every move. His years of experience have given him natural charisma and a confidence that leaves you swooning. And with about a dozen wardrobe changes, one of which included a kilt, Martin is a true show man.

As the house lights went up the audience were dancing way into the night. I confess my Ricky Martin song knowledge spans the short length of the 1990s however his new repertoire remained true to the Martin I use to love and groove to.

Martin will continue his tour of Australia to Sydney, Melbourne, Adelaide and Perth.