Rigoletto is a tale of power, sex and corruption.

Written by Verdi and first performed in 1851, it is one of the most well-known Italian operas. Considered to be the first of the operatic masterpieces of Verdiâ€™s middle-to-late career.

Despite its old heritage the story still remains ever relevant. With the question standing as to whether politics will ever really change.

People will always be driven by desire for power. 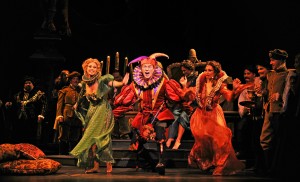 Scene from the classical Rigoletto Opera. Image from encuadrefotos.blogspot.com.au

Director Lindy Hume has taken this classical piece and transformed it into a brand new production for the QPAC stage.

Queenslandâ€™s own international tenor, Rosario La Spina will play the Duke of Mantua while Michael Lewis will play the coveted role of Rigoletto.

However, La Spina and Lewis are just some of the talented musicians to join the Opera Queensland Chorus and Queensland Symphony Orchestra to bring the show to life.

For those opera virgins be aware that the production will be sung in Italian with projected English translations.

Standing ovation for a gripping performance – The Mountaintop

This Weekend: Brisbane’s own Suitcase Rummage