It’s been said before and it should be reiterated once more: storytelling is the original art.

If you’ve found yourself nodding in agreement, (or if you just happen to be listening to Drake’sÂ Hold On We’re Going Home,Â as I am writing this), then there’s an upcoming exhibition to be held at REDSEA Gallery in James Street that you have to know about.

The artist’s name is Ross Jones; he hails from New Zealand ,and his artwork is, as I discussed with Creative Drinks’ director, genuinely something to marvel over.

As with any artistic talent, much of what is to be admired lurks in the detail. Ross’ work is a testament to this notion; his paintings are simple stories born of the complicated and masterful strokes of his brushes. The best part is, for those of us not so fond of some of modern art’s moreÂ “abstract” works,Â Ross’ pieces are a return to something we can fully appreciate – his illustrations are something we can understand, but which we cannot mimic, not for a million dollars. 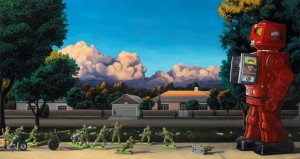 ‘We Come In Peace’ by Ross Jones

As the REDSEA Gallery website explains: “His pieces are a mixture of seemingly perfect places and events, but like all good stories, nothing is as it seems.Â  Shadows create just enough intrigue to tip the balance between a serene or sinister scene.Â  The result is just enough information in the composition to engage the viewer.Â  From there, itâ€™s up to the viewer to fill in the gaps and create their own story”.

The exhibition, titled “The Story So Far…”, represents Ross’ first event in Australia, and while his pieceÂ Uncertain OutcomeÂ is already on display at REDSEA, the complete exhibit will be open to the public next week.

The Details
What: Ross’ Jones exhibit “The Story So Far…”
Where: REDSEA Gallery, tucked away at the back of the Palace Cinemas building, behind all the restaurants. James Street, Fortitude Valley.
When: 10 June – July 6
Cost: Free, but not if you intend to purchase art
Websites:Â http://jonesthepainter.com/Â and James StÂ

A Wicked Slice of Pumpkin Pie – The Magic Hour