One Day Festival Just for Creatives.

Brisbane’s infamous Ruckus Slam is expanding to Ruckus Fest this coming October. You can expect to see poetry, music, circus, writing master classes, mental health talks, and so much more. The massive one-day festival will be filled with unique masterclasses, workshops, panels, networking opportunities, and a GALA show. The festival will be held on the 5th October 2019 at the ZOO.

Unlike our neighbouring cities, a lot of Brisbane’s creatives consist of independent artists, working in the underground, alive and bubbling in its own niche. Angela, Martin, Scott and Meg are four extraordinary artists who are creating an amazing opportunity for creatives to come together and bobble their heads.

Ruckus fest is working with MATCH Lab to fundraise for the event. This means that your donation will be matched dollar-for-dollar by MATCH Lab. Check out their IndieGoGo campaign. The fundraising ends on the 18th May, so get your dollar in to support independent and emerging creatives! 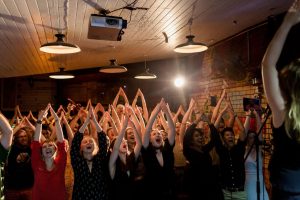 We’ve had the amazing opportunity to speak to two of the curators, Angela and Martin.

The Creative Issue: You guys are running Ruckus Fest this year, could you tell us a bit about the festival?

Martin: We’ve run all sorts of events and arts projects over the past six years. We’ve wanted to keep stepping up to something bigger — something stranger, and this seemed like the perfect opportunity to take everything that we’ve been doing and mush it all into one huge day.

TCI: That’s amazing! So, what can people expect to see at Ruckus Fest?

Angela: The day time is going to consist of panels, workshops, talks and networking around what it’s like to be an independent creative. There’s going to be a lot of fun up-skilling in different creative forms. There will also be some really practical stuff, so stuff around what to do when you don’t get the grant, or how to get an event, show or project off the ground when you don’t have resources. A lot of Brisbane’s art scene involves independent creatives, so people who have to have to make it happen themselves without a company or backing. We wanted to create a whole festival that highlights that.

Martin: Yeah, one of the things that makes us and what we’ve been doing unique is that we’ve brought a grass roots, do-it-yourself attitude to arts events in Brisbane. We don’t like the elitism that can come with art, the barriers of entry and the glass ceilings, which are often to do with money or reputation, or education.

Angela: All of our events are aimed at people who want to participate. So we don’t believe that people need a minimum requirement to be an artist or to be involved in the arts, or do something great. You just need to want to do it.

TCI: I heard that there is going to be a GALA show as well. Can you tell us about that too?

Angela: So the day is going to be lots of workshops and fun activities, and the night time is going to be a huge gala. We’re working with people in the community to program the best people for that. It’s going to be a mixture of comedy, circus and we’re going to cap it off with some live bands, so there’s a whole range of fun stuff happening. It’s based at the ZOO, but we’re having some off-site activities throughout the day — all near the valley precinct. 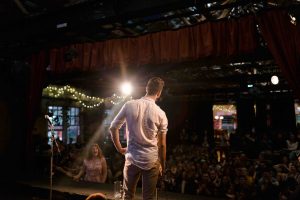 TCI: Can we expect any familiar names, or is that a secret?

Angela: We’re going to do our program launch post on our crowd funder. At this point we’ve had some discussion with some artists in Brisbane — artists that I’m sure people will be excited about. We’ll do the full program launch once our fundraiser is finished.

TCI: What got you guys into poetry slam, how did it all begin?

Angela: The first time someone took me to a poetry event I was like NO, I’m not doing that, that sounds dumb.

Angela: But then you go and you realise that it’s fun and it’s silly . Martin, Scott and I did a poetry tour together six and a half years ago. While we were touring, we decided that when we came back we wanted to start a slam event in Brisbane. Meg joined us when we told her our idea, she decided she wanted to be in too. So we just started it.

TCI: I saw online that the first Ruckus Slam started in a sticky dive bar.

Martin: We started in this tiny bar called the Hideaway. It was a wonderful space. I think our first event would’ve had maybe 40 people. It’s just grown phenomenally since then. Now we’re at the ZOO which is one of Australia’s most loved live music venues. So it’s been blown out of proportion to what we’ve originally imagined, but we’d love to keep the spirit of that sticky dive bar. Because we are still sticky. We’re still broke poets, as we were in the beginning.

TCI: Are you guys going to be performing at ruckus fest as well?

Martin: We won’t have time.

Angela: It’s going to be all hands on deck to produce and run the day.

Martin: Also, no one wants to hear from us. We run the events and they see us all the time. The point of ruckus fest is to grow and expand the community — to bring in new voices. And those are the people we’re excited to hear from, that’s who we want involved. 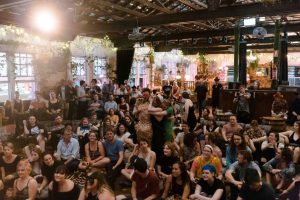 TCI: Are you having an open mic there as well?

Angela: There’s going to be an open mic session that will be happening in the afternoon. There will be an application process for people who want to perform in about 8 weeks time as well. We’ve scheduled in some of of the program, but we are definitely looking for other—

Martin: EOI (expression of interest)—is that what they call it.

TCI: So, for all those who want to apply and perform at ruckus fest, how would they go about applying?

Angela: Currently, the best thing to do would be to follow us on Facebook. That’s where all of our information is being released.

TCI: So, you guys are fundraising at the moment, how can we contribute or help with fundraising?

Martin: You can donate as much as you’d like to us. Part of what’s great about our IngieGoGo campaign is that your donation will be matched by MATCH Labs. We’re selling discounted pre-sell tickets to Ruckus Fest. There are perks of people wanting to donate more too. You can get a whole range of silly things ranging from us writing personalised poems dedicated just for you to us running a poetry slam event at a venue of your choice—wedding, funeral, what have you.

TCI: Would love to see poetry slam at a funeral, that would be something to see. Anything else you’d like to add to conclude the event

Martin: Ruckus fest is not just for artists. It’s for young people, emerging creatives, crafts people, who are passionate about the arts, passionate about creativity in lots of different forms, and so I’d be keen for ruckus fest to be as open as it can be, and welcoming to new faces not just to those faces we see at our monthly poetry events, I want to see graphic artists, writers, young journalists, and musicians of all kinds.

Angela: And people who maybe aren’t doing any of those things. But are interested in thinking about starting. And most of our workshops and master classes will be aimed at all levels. So if there are people walking in without any background in something, that’s totally fine, we want to support that as much as we’re supporting people who are already independent creatives

Check out their website to find out more! Support independent artists in Brisbane by donating to Ruckus Fest’s IndieGoGo page.