Rumour Has It â€“ Return Season at the Judith Wright Centre

Naomi Price takes the stage in her acclaimed portrayal of musical genius Adele.

Price moved from England to Australia to study at Brisbaneâ€™s own Queensland University of Technology.

From there she has appeared in numerous productions and directed the Brisbane 2008 season of High School Musical and the 2011 season of Grease.

Price is no stranger to the stage and Brisbane audiences are excited to welcome her back.

Her new show explores the life of British singer, Adele. 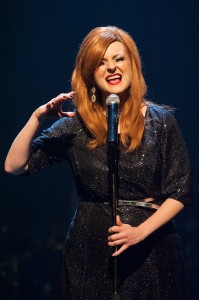 Image from The Judith Wright Centre

From the streets of Tottenham to the Grammy awards, Adele tells the story of an average girl who soars to stardom all because of her breath taking voice.

Price does a fantastic job at portraying Adeleâ€™s life journey.

The performance is accompanied by all time favourite Adele hits including, ‘Rolling in the Deep’, ‘Someone Like You’, ‘Rumour Has It’ and the James Bond inspired ‘Skyfall’.

After sell out seasons across the country Rumour Has It returns to the Judith Wright Centre to entertain Brisbane audiences.

Get your tickets now to what is sure to be an amazing evening!