Seaside Give Us A 'Dopamine' Hit!

Indie rockers Seaside have been kicking goals since their inception and their newest single ‘Dopamine’ is a fine addition to their catalogue. We spoke with lead vocalist/guitarist Darcy Dexter about the new single, songwriting and a very special upcoming music video.

Following a massive run of singles, ‘Dopamine’ has all the sonic signatures that fans have come to expect from the band. From reverb soaked guitars to Darcy’s melodic vocal lines it’s easy to see why Seaside have established themselves as one of Australia’s fastest rising acts.

The Creative Issue: Just wanted to say how awesome the new single ‘Dopamine’ is, can you tell us the inspiration behind the song?

Darcy Dexter: Yes I can. I do this really weird thing where I write one liners in books if I think of something quickly and I think I was just going through all of those, some of them were not quite corny but super lovey. So I wanted to write a song that captured that feeling of being more than a crush, I guess it would be love, that kind of whirlwind which could be a good thing, or a bad thing, but at the end of the day it’s this universal feeling that ties us all together.

TCI: How do you approach your songwriting in Seaside?

DD: I think it’s a mixture of things, I get asked this a lot. I think for me I hear something, that in a really strange way evokes a feeling of a time, or reminds me of something I’ve written about, or would happily write about. So for a while it was really just being inspired by the things that they [the band] wrote. Obviously there was a long time where we couldn’t rehearse or practice because of the lockdown, so it was kinda cool because we took a modernised take on writing where we would send files back and forth. Now in this next wave of writing we just jam. So it’s been mixed. At the moment it’s just jamming a song and we’ll come home to our studio to record it, then take it away. I need time to work on things. I’m an overly sensitive person so it’s really nice to tap into that.

TCI: You are based in Byron Bay, tell us about the music scene down there? Obviously there are lots of successful bands from Byron, Parkway Drive come straight to mind. How does the scene work to fit in so many bands and such diversity?

DD: It’s a really funny thing, I was born here and grew up here, and so was Froggy (guitar) and I’ve known him since he was a little kid. Chris (drums) and Tom (bass) moved here later. Obviously there are bands like Parkway Drive who blew up and that was well deserved. Because we’ve known each other for so long those things become a little obsolete. We’re all friends in the scene and it’s such a polite place that everyone just says hello to each other in the street and thinks nothing of it. We are all just close, we all support each other. There’s definitely cliques, but not in a negative sense. We’re just so proud of all of our friends and they would probably feel the same about us. We are just all really supportive to each other anywhere we can be and try to lift each other up. I think that is super important. It’s big here but it’s so incredibly small.

TCI: Do you think that (living in Byron Bay) influences your writing and stylistic direction?

DD: It definitely varies. I never lived in a big city as a child. My dad is a musician and his family are musicians. There are also a lot of hippie schools that really pushed art and creativity so that was definitely something that helped me as a child. My dad was adamant that I at least play an instrument or know some music theory. But the older I got, the more it changed. I was definitely more encouraged by the area and the opportunities. I never did the big city thing and I think that would be harder. It is a creative town. I was given that freedom to explore and I don’t think anyone there is going to be “No, this is bad.” or “You shouldn’t do this.” everyone is just so encouraging. Everyone here just loves art and music and spending time with each other which has inspired it. Sound wise I don’t know. Sometimes the town is inspiring in its own way, but sometimes it’s really uninspiring, it’s really conflicting [laughs].

TCI: Dopamine was mixed by Paul Pilsneniks (Boy & Bear, The Mars Volta, Silverchair). How did that collaboration happen?

DD: Paul is the loveliest dude in the world, and insanely talented. We’ve been working with him for quite a while and he’s also a mate so we get to be completely open with him about what we want, and what we want to sound like, in each specific song. He’s the best, I can’t say enough good things about Paul.

TCI: To celebrate the release of the single you are playing a sold out show at Black Bear Lodge. You seem to come up to Brisbane a lot (which we love) what are some of your favourite things about playing in Brisbane?

DD: It’s the closest city to us, it feels new and exciting because it’s so big in comparison to Byron. I have this discussion with the band all the time, but Brisbane crowds are so great. Everyone comes down with the intention of listening. We’ve had some really good shows in Brisbane, the crowd is awesome and everyone is just so happy to be listening to the music. Some people sing along, which completely wigs me out! I still can’t fathom that [laughs].

TCI: You’ve played a bunch of awesome festivals (Splendour, Party in the Paddock & BIGSOUND) what festival has been your favourite?

DD: That’s a hard one! Obviously Splendour was insane!! Three days of my life that I can’t quite fathom. To be at the back end of something you’ve gone too since you were 16 was pretty epic. I was so proud of us for actually landing that, and being able to do that. But I had a really good time at Party in the Paddock. We were camping, and I hate to say it, but I’m a little bit high maintenance in that way, in that I don’t camp huge amounts. So for me being in this large paddock in the middle of summer had me a bit apprehensive, but ended up being the funnest weekend! We made a bunch of new friends and it was a really fun show. The night time was the single coldest time in my life. I’ve never experienced the cold like that. I slept in a sleeping bag under a doona and I was still cold and that was in the middle of summer. But it’s still one of my favourites. 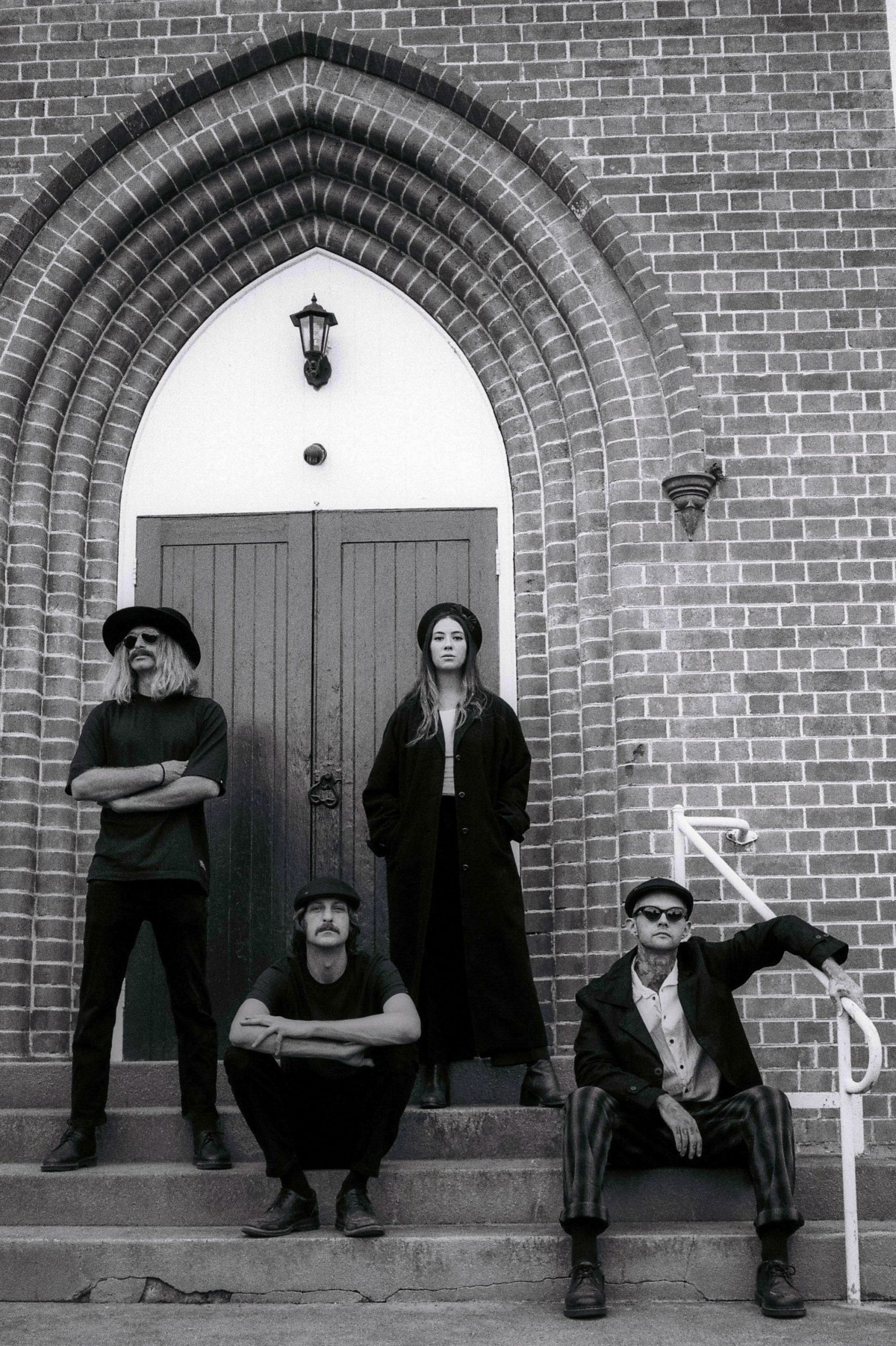 TCI: It’s been an odd year in terms of live music, but BIGSOUND has been announced for this year. You played there last year, can you give us any tips on how to survive BIGSOUND 2020?

DD: I think the most important thing is to have fun, and not be too hard on yourself. For me, whether it was good or bad, we practiced really hard and were really hard on ourselves. There was a split second there where I thought I probably should have enjoyed it more. I think for bands, the people who want to come and watch you will, and if you’re there you’re probably good already. So just have fun and that will be more fun to watch. Also don’t get too “day-drunk”, because singing and playing dehydrated is the worst. And also rent a nice hotel room if you can do that, and treat yourselves, live it up!

TCI: I see there’s a video in the works for ‘Dopamine’, can we have an inside scoop on what to expect?

DD: So, for a little bit I think everyone thought that an Instagram video we released was the start of the film clip, in reality I’d just gotten a GoPro and really wanted to use it. But we do actually have a video in the works. It’s something we’ve been planning with, actually I’m not sure if I’m allowed to say his name [laughs]. It’s a guy who works closely in the creative realm of the industry and he had just decided that he wants to make a clip with us. He’s an absolute legend and we’ve been talking about it for months and months and it’s finally coming into fruition. All the parts are falling into place and for us it’s definitely the biggest clip we’ve done production wise, it’s going to be full on.

TCI: What is in the works in the future of Seaside, you have released a handful of massive singles in the past eighteen months, is this part of a bigger picture, will there be an album on the cards?

DD: We toss this idea around 24/7. For us, we obviously have released songs with infinitely different sounding things to what we sound like now. It took us such a long time to channel that into where we wanted to be. I ideally would like to do an album but I’m a bit of a perfectionist. I would want every song to be exactly how I wanted it to be, and I don’t know how long that would take [laughs]. I think we will be releasing an EP, we have another few songs, one that’s been recorded already, and others that we are going in to record in the next month or so. I think that will all end up on an EP. But it could be time to do an album, because I don’t know how to describe it, but the beginning of Seaside is on an EP, then the middle of our development is on another, then obviously these songs for another EP. So it kinda feels right to tie it up, like all good things come in threes I guess.