Following their latest single ‘Once a Rose, Now a Parasite’ released in April of 2021, Brisbane boys SENTIMENT are ready to release their new and highly anticipated track, ‘Tragedy’.

SENTIMENT are a four-piece post-hardcore band from Brisbane. Over the past year, SENTIMENT have grown an audience following the release of their debut self-titled single ‘Sentiment’ and their most recent post hardcore anthem ‘Once a Rose, Now a Parasite’.

With that most recent release, the band welcomed former member of Days Like These, Sebastian Belvedere who took over vocals and took the band’s sound in a stellar new direction. ‘Once a Rose, Now a Parasite’ saw great success with it being spun on Triple J’s short.fast.loud, over 4k streams across platforms and the band’s first music video garnering over 1.5k views. Well done boys!

SENTIMENT’s next step is ‘Tragedy’. With a release date of the 16th of July, SENTIMENT have ditched the pop punk choruses in favour of a hardcore/metalcore tune that will string you up with its open, soaring clean choruses and slam you down with its thick riffs and gutting breakdowns. This next instalment in SENTIMENT’s catalogue shows they are a heavy hitter in the scene and are earning their place as one of Australia’s highest potential bands.

Following this release, SENTIMENT will be playing their first festival spot at Polarfest which includes names such as Young Lions, APATE and Closure (SYD). 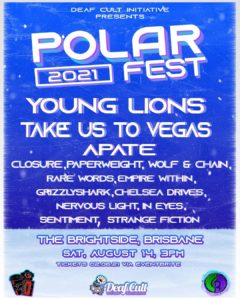