Sexy world of the Spiegeltent

Friday night, 9.30pm and I have stepped into a world far from the concrete floors of King George Square.

A foreign underground, adults-only show where anything can happen.

This is the no rules, all outrageous and jaw-dropping place that is the Spiegeltent.

Empire is no ordinary circus, this was acrobats like you have never seen before.

The intimate setting with a small circular stage surrounded by a handful of an eagerly awaiting crowd who had no idea what was coming. 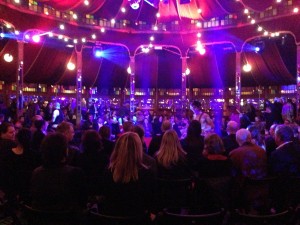 Inside the famous Spiegeltent

The ethereal music begins and the stage is set alight, a beautiful women emerges and enters the clear plastic sphere above…

Direct from Broadway, Empire puts on a show you will not forget.

I donâ€™t want to give away any surprises but beware, once you step into this tent of mirrors absolutely ANYTHING can happen, none of which is of the PG rated kind.

The acts are a thing of beauty â€“ some will have you holding your breath in anticipation and fear, others will have you trying to catch the air as you laugh yourself into a fit and, letâ€™s just say some will leave you questioning whether your drink was spiked.

Raunchy burlesque, hysterical skits and a world class exhibition of how much the human body can achieve.

There’s a quick change act with a difference, women in lingerie and more importantly, men with physiques that could happily be compared to some sort of Gods. 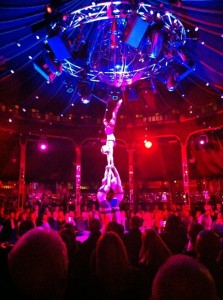 For those in the front row look out for a surprise; this is audience participation youâ€™ve never imagined could happen in any respectable establishment.

Thatâ€™s just it, Empire is no respectable establishment.

It throws out the rules and social etiquette, it opens up doors that are usually kept closed and invites you into an intimate world where the weird and wacky are embraced and sex runs riot.

Nothing is taboo and everything tantalises the senses, be ready to be wowed, aroused and disgusted at the same time.

As I walked out of what could only be described as utterly surreal I found myself thinking: running away with the circus might not be a bad idea after all.

So spend a night far from the greys of reality and dive into an outrageously electrifying world.

But be quick, this tent of outrageous human strength and sensual vibes ends this Sunday.

Some Girls Walk Through Starshine Fields

How not to be a tourist in Brisbane