Deeply philosophical and unafraid to divide audiences with his opinions on the psychology of human behaviour and the dangers of political extremism; Shayne Hunter is arguably one of Australia’s most intellectually stimulating and thought-provoking comedians.

On Saturday 14th March he will be performing his solo show “Yeah Nah” at The Sit Down Comedy Club, Paddington, Brisbane. Shayne’s show is heavily inspired by his previous experience as a member of Antifa, an extreme left-wing political cult who he now strongly denounces.

“Philosophy teaches us that we cannot be certain about anything, all we can be sure about is what we do not know. Having been a far left-wing anarchist street activist I foolishly could not see that reality is far more complex than I can ever imagine”. Shayne states that living in a political echo chamber and only associating with people who shared similar views to his own led him “down to a form of spiritual hell”. He now uses his time on stage as a comedian to “encourage people against arrogance” and to be open minded and welcoming of people who have differing political beliefs to their own.

Currently studying a degree psychology, Shayne is highly innovative as he enjoys utilising the knowledge he acquires from his studies and finding the funny side in what motivates human beings to behave the way they do. “I would love to do a show about ego defences, like rationalisation, repression (denial) projection etc, and cognitive bias, such as the availability heuristic”. For those of you reading this article who are unfamiliar with these key psychological concepts Shayne encourages you to Google them.

Having entertained crowds across Australia and Asia for over a decade, Shayne says that one of his biggest career highlights was doing a stand-up comedy show in Laos, a South East Asian country ruled by a Communist dictatorship. “Agents of the state were watching my show making sure I didn’t commit thought crimes. Its intense when a heckle could lead you into a prison sentence”.

“It was a great feeling doing stand-up comedy in the developing world, as the art form is growing massively in these comedians. the next Dave Chappelle’s or great comedians of future generations may come from parts of the world like South East Asia or Africa”. 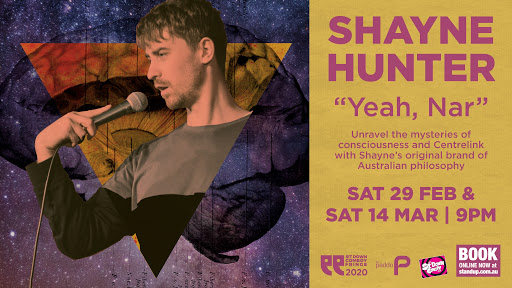 Shayne has always been a big supporter of the underdog and a strong advocate for giving alternative comedians opportunities to perform for big crowds. In 2019 Shayne established a comedy competition called “Crowd Control”. In his own words “Crowd Control is a comedy competition that aims to see which comedian can do the best audience interaction improv-based humour, basically not using comedy material by making it up on the spot”. The format is 8 comedians in pairs of two, one comedian in the pair goes up on stage for roughly two minutes. Afterwards the other comedian goes on stage for the same time, afterwards the audience votes by cheers to determine which comedian was the funniest. The comedians judged the funniest advance to the next round. Round one consists of four pairs, round two features two pairs, and round three two comedians play in the final to determine the competitions winner.

Providing comedians with an opportunity to practice their improvisation skills via Control Control’s competition will hopefully “enable them be more dynamic in their performances and more able to deal with chaotic situations like hecklers; As they will have practiced being comfortable in situations where they cannot rely on preparation, which can be scary”.

For many years Shayne was an undiagnosed dyslexic and consequently struggled with reading and writing during his childhood. Shayne now enjoys making light of his condition and the negative impact his learning difficulties had on his self-esteem during his youth.

Shayne’s advice for aspiring comedians is to “focus on trying to enjoy writing and performing the comedy rather than caring about how much laughter it gets. This isn’t to say be arrogant and not to learn from your errors or lack of response but simply to tie your happiness to the process rather than the destination. I am sure this wisdom carries over to other fields outside of comedy”.