If you haven’t heard of this breakout success from Michelle Law, you simply aren’t going to the right type of parties. Never fear, The Creative Issue is here to clue you in.

Back for it’s second run, Single Asian Female is the darling of Brisbane’s homegrown theatre scene. The show made it’s debut in 2017 to rave reviews, and followed up with a sell-out season at Sydney’s Belvoir.

The story follows the Wongs, a semi-dysfunctional family of Queenslanders struggling through life in modern Australia.  The characters are thoughtful and gratifyingly three dimensional, and by the end of the opening number you’re already invested. 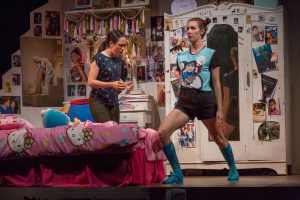 The show is set on the sunshine coast, in the locally owned Chinese restaurant that everyone has down the road from them (you know the one; it serves Pasito and the owner always remembers you). Law’s depiction of Aussie culture and all it’s wince inducing-flaws is pitch perfect, and her wit is as sharp as a tac. Over the course of the play she gleefully skewers everything from online dating to Pauline Hanson.

One of the major achievements of Single Asian Female is how it contextualizes the experiences of first and second generation Australians in a way that tugs on the heartstrings of a diverse audience. Looking around the theatre during climatic moments of the play, it wasn’t uncommon to see an incredible variance of viewers laughing, crying, and emphasizing together as one. This is what theatre should be; a melting pot of human emotion that lets you find your own meanings and leaves you feeling a little bit more thoughtful for it.

A good play is nothing without a capable director, and Claire Christian’s ability to bring out the best in a script is on full display. Her veteran’s understanding of the stage is evident as she creates moments of perfect tension and release, finding intrinsically theatrical moments and putting them on display in a manner that couldn’t be achieved in any other medium. Her handling of contrasting emotion deserves and fluid staging deserve particular praise. This is complimented by a beautifully constructed set from designer Moe Assaad, and the always capable sound and lighting techs at La Boite.

The cast is mixed bag of old hands and new faces, the most notable of whom is Michelle Law herself. Stepping into the role of Zoe Wong Law delivers and an effective perfromance that, while occasionally lacking the finesse of the other career actors, is still heartfelt and convincing.

The stand-out stage-presence is undoubtable Hsiao-Ling Tang. Her depiction of the matriarchal Pearl Wong is intelligent, authentic, passionate and hilarious all at once. It’s a masterful take on a well constructed character, and deserves the highest approbation. 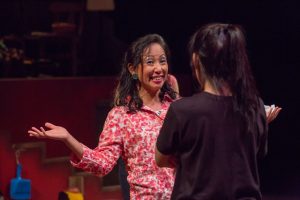 The cast is rounded out by Emily Burton, Patrick Jhanur, Courtney Stewart and Tatum Mottin, all of whom offered exceedingly capable performances that are often elevated by moments of brilliance (Burton’s energetic lip-sync of Salt ‘n’ Pepa’s ‘Shoop’ springs to mind). 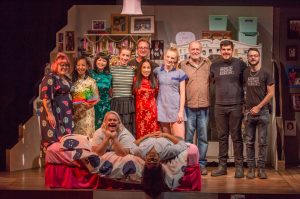 Sizzling with sass, seared in creative juices and served with a dollop of soul, Single Asian Female is unforgettable.

If you’re a Melbourne reader keep an eye out for it at the International Comedy Festival, and make sure you read up on the rest of the fabulous 2019 Season at La Boite.