Sketchpad returns for the Fringe and we have tickets!

Local sketch troupes The Sexy Detectives and The Complete First Season have reunited, and you should probably buy a ticket.

The resulting show, Sketchpad, is an interesting split format first trialled back in April, and wisely revisited with minimal tinkering. Each three-player troupe is given roughly equal stage time, trading slots and sharing tech but otherwise serving two distinct styles.

Of course, perhaps the main advantage of a split bill is the combined audience.

Those numbers are more important than usual in The Loft’s cavernous upstairs space, with its rows of black chairs and undeniable conference vibe no amount of quirky lighting can settle.

Combined with Archive below, the building at one point seemed dangerously close to hosting more comedians than punters â€“ so it was good to see a healthy opening night crowd flow in, sending bar staff for boutique beer at reasonable prices.

Hot theatre lighting flooded the stage as we took our seats.

The sketches involved are a nice mixture of new offerings and old favourites from previous shows, some slightly rewritten but mostly just performed with ever-greater polish.

Such commitment to production is a calling card for The Sexy Detectives, who are easily Brisbane’s best established troupe. For whatever reason, that kind of obsessive attention to small details has always been vital to sketch comedy â€“ logistics, stagecraft, the arcane science of swapping this word with that, or frowning at just the right moment. 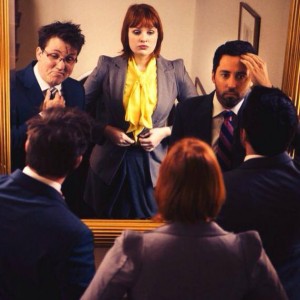 It’s a carefully rehearsed spontaneity, and something The Sexy Detectives master.

The Complete First Season mostly hold their own when it comes to performance (ignoring some doubts around Liz Talbot’s range), but weak premises and a lazy reliance on puns sometimes let them down.

Still, despite the few that should have been axed at writing, most First Season pieces are quite solid â€“ particularly an Alex Mason monologue cleverly skewering both state politics and the fancy dress industry (that old gag).

Sketchpad is an extremely tight, clever and entertaining show, with probably the best production values you’ll find at the Fringe. Buy yourself a ticket or the stand-up oligarchy wins.

Alternatively we have two double passes to giveaway for tomorrow nights show! To be in the running email us at info@creativedrinks.com.au and let us know what and where the show is. First in best dressed!

Where: The Loft, West End

When: Saturday, September 7th from 8:00pm