Most Dentists/ â€œDontistsâ€ make Clint Eastwood look like Joan Rivers. There is something terrifying about the right-of-passage teenagers undertake when trying to re-align various degrees of dental deformity.

For American cartoonist Raina Telgemeier, that feeling was no different. Inspired by personal events Smile is the coming-of-age story about a girl going through the bulk of her adolescence imprisoned behind braces and headgear.

â€œMy whole goal is capture a memory or mood on paper,â€ the San Francisco native explains. 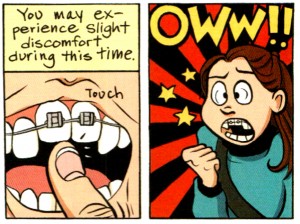 Read it they did. Going on to become a New York Times Best Seller as well as being voted No1. Book in thirteen American States, Smile explores social divisions, self-identity as well as scrunchies, crimped hair and other fashion faux pas that defined the 90â€™s. 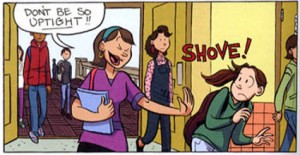 In Brisbane for the Reading Matters Program, Telgemeier lists her creative pillars as Roald Dahl as well as her favourite book: Mrs. Frisby and the Rats of NIMH by Robert C. Oâ€™Brien. However, it wasnâ€™t until discovering comics at the age of nine that the fuse was well and truly lit.

â€œThe first one that reached out and grabbed me by the neck was Calvin and Hobbes. The artwork, I just feel like the characters are alive, they breathe and they lift me.â€ 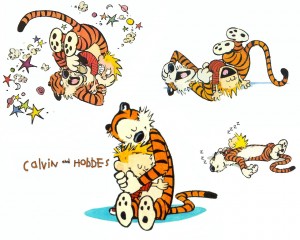 â€œMy other favourite comic strip is For Better or For Worse by Lynn Johnston. Itâ€™s very unique because the characters all age in real time, so every year as they got older it was like I was growing up with these people. I did not consider them characters, they were real to me.â€

While most youngsters are locked in first-person shooter games, school day afternoons consisted of a voyage into the abyss of creativity as Telgemeier began designing a world of her own.

â€œIt was in middle school (grade five) that I started making comics in earnest. What I did was, everyday after school instead of writing in a diary about my day I would draw a comic. Essentially Iâ€™ve been keeping journal comics about my life since I was 11.â€

It was this dedication and work ethic that catapulted her to the mainstream. With Smile taking five years to complete from start to finish, the evolution of completing a comic novel from idea embodiment to bookshelf bound attainment is a long and exhaustive process.

â€œA lot of people now days assume that comics are made on a computer and that there is a button that says â€˜draw,â€™ but I do everything by hand, my methods are extremely traditional,â€ she says. â€œThat is not to say that people cannot make comics with just a computer, a lot of people do it and they do it very well. For me, it just makes the whole experience more organic and I love the way hand-drawn comics look.â€

Currently in the process of completing her third book entitled Sisters, a memoir about the joys of family road-trips and sibling rivalry, Telgemeier now finds herself in the healthy predicament of juggling time between author talks and book signings to meet deadlines.

â€œMy works small enough that I can work on an airplane tray table if need be, but I didnâ€™t do any drawing on the flight here because I was watchingâ€¦ ummâ€¦ The Devil Wears Pradaâ€ (said sheepishly with a grin).