Revenge for betrayal. A paradox of moral questions.

â€˜Breathless Timeâ€™ follows the journey of MarÃ­a (Juana Acosta), a woman caught by war in Colombia and devastated by the death of her daughter at the hands of Spanish militiamen. She commits herself to tracking down one of her daughterâ€™s killers to exact revenge, however, MarÃ­a learns that her path to destruction and also hopefully resolution will involve others whom she didnâ€™t know or intend to hurt.

The film is inspired by previous work directors AndrÃ©s Luque and Samuel MartÃ­n Mateos conducted as investigative journalists, amid a Colombia in crisis. The film echoes the conflict the two men experienced whilst also exploring the nature of trauma on the human psyche and how it affects and even motivates a person.

The film has one of the most cinematic and visually stunning, aesthetically jarring yet overall mysterious opening images â€“ man and nature â€“ that plays into a news report styled videography opening sequence which details the horror, the killings and loss of land and rights that devastated Colombia during the 2003 attacks. The prominent use of light and shadow in the mise-en-scÃ¨ne further evokes a symbolic meaning with Juan Carlos GÃ³mezâ€™s cinematography, marrying narrative filmmaking with candid documentary techniques.

Luque and Mateos present a story that unravels slowly, showing the differing perspective of MarÃ­a, her son Daniel and his new schoolâ€™s psychologist (Carmelo GÃ³mez) who is also soon to be MarÃ­aâ€™s companion; and IvÃ¡n (FÃ©lix GÃ³mez), a Spanish solider involved with attack on Mariaâ€™s family and his unknowing, totally devoted girlfriend Vero (Adriana Ugarte). This one incident touched so many lives. Truth is seen as a smoke and mirrors game and, perhaps unintentionally, its presentation alludes to the nature of the media and what it wants its audience to know to illicit a reaction throughout the layers of detail navigated in the film.

Juana Acosta perfectly captured her role as a grieving mother and widow who cannot help but draw sympathy from other characters in the film as well as the audience, and also support for her cause. Acosta through her refined manner and clear determination took the audience on a journey that teaches revenge is never sweet and when you dedicate your life to something it doesnâ€™t give you meaning – it doesnâ€™t make you feel less empty. It gets you up every morning until you realise that pain will always be constant, even if itâ€™s exacted onto someone else or even shared. You can let yourself start moving forward. 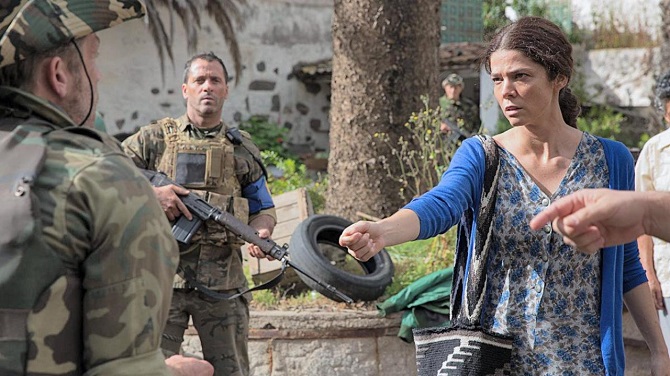 Ivan Luengo who played MarÃ­aâ€™s traumatised son gave a standout performance. Danielâ€™s inability to speak about his past is only brought to light a few minutes into the film where itâ€™s revealed that death is a kindness but still heartbreaking.

The purpose of cinema isnâ€™t only to entertain but to engage and with â€˜Breathless Timeâ€™ it is evident that this medium has been utilised as a way of speaking out and bringing awareness to the social taboo and mindset that tries to hide violations of human rights. Breathless Time is an emotionally supercharged film that deals with a heavy subject matter, it will unsettle audiences, mostly western audiencesâ€¦ but perhaps in a good way and for good consequences.

For more information about the Spanish Film Festival click here.

Comedians Unite in The Ultimate Roadshow!