Ahead of their show at Greaser Bar on Thursday, December 19th, we caught up with our new favourite punk-rock four-piece, Split Feed.

The Brisbane date wraps up Split Feed‘s East Coast December tour, kicking off in support of their Second Skin EP.  Split Feed have proved themselves a to be a force to be reckoned with on the new release. From the touching and relatable lyricism of ‘Dwell’, to the triumphant finale of the title track, Second Skin is infectious and anthemic, and a healthy dose of punk-rock goodness.

Not only are they one to watch, they’ve cemented themselves as a staple in our summer listening. We’ll certainly be welcoming them to their Brisbane stage with open arms. 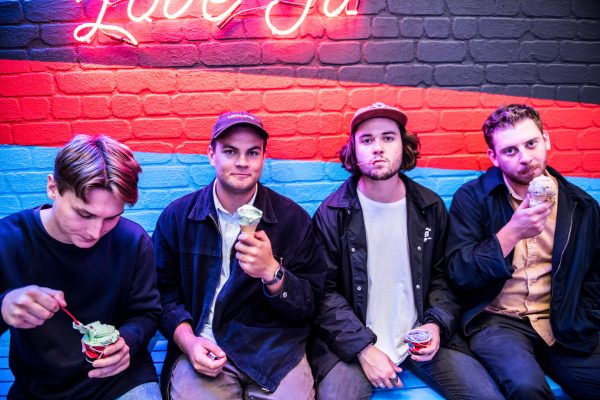 The Creative Issue: You’ve just released your sophomore EP, ‘Second Skin’, can you tell me a bit about the writing and recording process for that one?

Joe Willis: Most of the ideas I had for the songs were all based off little ideas I had recorded on my phone. I usually get a bit too nerdy when it comes to writing guitar parts, I love stacking weird chords over each other and trying to make weird ideas sound cool. It was just a whole bunch of demoing in my room just mucking around with chords and riffs. The recording process was a great time, Fletcher Matthews is awesome to work with and his input was always highly valued.

TCI: If you had to describe the EP in one sentence, how would you say?

JW: Five in your face pop punk jams with lyrics sprinkled throughout on love, frustration, memories and resilience.

TCI: What have you guys been up to in the lead up to release?

JW: Not much really, we’ve just been taking it easy with playing shows just to focus more on getting a fresh live set down. We all work a lot so it’s hard to find time to organise stuff, but I think now that the EP is out we will get more opportunities to do things.

TCI: How are you feeling ahead of the Second Skin EP tour?

JW: Great! It’s always super fun to go around and play shows everywhere. I think we’re all just really excited to get away for a while and hang out, it’s been a while since the last one so it will be interesting to see how this one goes with a bunch of new music.

TCI: Ahead of the EP release, you dropped a pretty spooky music video for the ‘Dwell’ single. Where did the concept for that come from?

JW: We originally had a different idea. We wanted to do like a horror type video with the person being stuck on a film set and they aren’t allowed to leave, eventually the person tries to escape, and all this crazy stuff happens. Unfortunately, we didn’t really have anywhere to film that kind of thing, so full-time legend Dave Fulham came up with a more realistic idea that was just as cool and way easier to film.

JW: I know a lot of people already know this, but for people who have only recently stumbled upon us, we used to be a three-piece band and I was playing bass instead of guitar. We used to make funk/jazz instrumentals, we had no idea back then that we would be doing what we are doing today as a four-piece pop punk band.

TCI: If any of our readers should listen to a fellow Newy band, who would that be?

JW: Ooooh such a hard question. There are so many good bands in Newy, but I’ll have to say Rum Jungle. The Rum Jungle boys and us went to school together and we’ve been best mates for ages, really good tunes and they’re a very hard-working band. I’d also highly recommend Craterface, they’re a hip-hop duo who are also our best mates and they just released an insanely good tape.