Stand-up at the Stones Corner Hotel

Stand-up is still the rock and roll of comedy, and nothing illustrates that better than an open mic night.

There’s a grizzled, cynical professionalism to anyone who sticks it out on this stage.Â Comedians scratch away in punk notebooks of jokes and dirty drawings, like 8 Mile if Eminem read too much and really liked Bill Hicks.

They chat over drinks before the show startsÂ (water only), discussing pubs and punters and promoters.

Of course, the Sit Down Comedy Club is the only major player in town, and has longstanding links to RAW Comedy as well as shows up and down the coast. Their banner says it best: “Pimping Comedy Since 1992.” 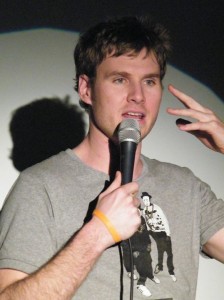 As far as their venues, the Stones Corner Hotel is pretty typical – geographically and demographically confused, lodged somewhere between inner suburb and outer city.Â There’s Keno on the TVs, sure, but Friday night is craft beer night, and playful faux-graffiti spreads over a few walls.

The night’s MC, Damien Power, tended to operate a step or two ahead of the audience, pushing a bit about Tony Abbott from funny to tired to hilarious.

“The best way to see comedy is at an open mic night, because you see the weirdest shit,” said Power in his opening segment, and I tend to agree.

“I saw one guy throw up on stage.”

There’s a lot of reasons stand-up is such an intense, stressful format. Guys (and it is mostly guys) rack up dozens of shows before their cousins in improvised theatre have even finished the first workshop.

TJ and Joel Baltham had sets full of rookie anxiety and uncertainty, something I always find mesmerising, and more than a little dangerous.Â Andrew Fitzsimons Riley managed to win the crowd over despite the most off-putting opening joke ever, combining a weak pun with casual sexism.

That smutty boy’s club culture is alive and well, by the way, with quite a few acts delivering a kind of “ironic” misogyny straight from the internet.

Corey White, on the other hand, covered sex with hilarious precision and tight delivery. It takes a special kind of genius to explain gender relationships using the economics of supply and demand, but White has this in spades. 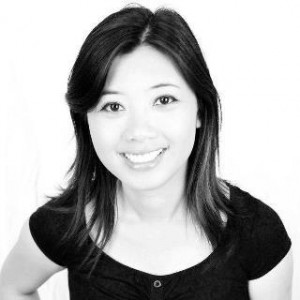 For my mind, though, the strongest act of the night was Ting Lim. She uses open mic nights to try out new material and practice delivery, honing the craft of making strangers laugh.

“I’d like to be a full-time comic if I can, but you have to do the hard yards,” said Lim, carefully blowing cigarette smoke in the opposite direction.

“I’ve only been doing it for three years – I need to do another seven.”

This hierarchy and clearly visible career arc (if only for the lucky and dedicated few) puts stand-up in a league of its own. It’s not all funny, charming, or even coherent, but the open mic circuit is where everyone begins.

Two of the strongest performers of the night (Corey White and Geoffrey Windle) hit The Paddo Tavern next week.