“It’s just that you have to want to marry somebody, not just somebody.” Company explores the art of maintaining relationships in a society where public and private spheres increasingly intertwine, and technology continually becomes more pivotal.

Performed in the Visy Theatre at Brisbane Powerhouse, the cast of Company produced an engaging work highlighting the highs and lows of modern-day relationships. The cast included a number of Griffith University Queensland Conservatorium’s third- and second-year students. Company, in addition to the third years’ earlier productions of Godspell, touring Brisbane, Sydney, and Melbourne, and Little Women: the Broadway musical, at Brisbane Powerhouse, is a culmination of the students’ hard work and dedication over the course of their studies. The cast’s performance was strong, and their talent and training were evident. 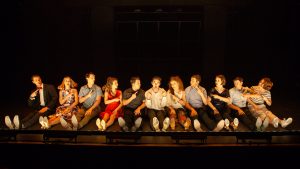 While Company explored relationships through the interactions of one bachelor and his married and engaged friends, the production and themes explored are relatable to any person traversing the intricacies of romance. During the score “Getting Married Today”, Amy, Kyra Thompson, frantically expresses the uncertainty she feels on her wedding day. This anxiety easily translates to the anxiety felt when you suddenly find yourself in a serious relationship or reaching a significant milestone. The themes explored in Company are universal, explaining why the production, originally premiering on Broadway in 1970, is still relevant today. 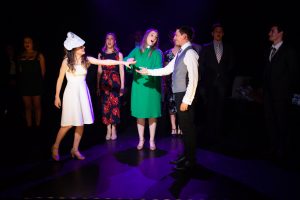 What I enjoyed most about the production of Company at Brisbane Powerhouse was the enjoyment the cast exhibited. The cohort clearly enjoyed their time on the stage. The musical performances were fun, energetic, and dramatic. During the score “Side By Side By Side”, which opened the second act with a flourish and featured bachelor Robert, Jerrod Smith, and his married and engaged friends, the cast performed a Las Vegas-esque dance number, complete with black bowler hats. This score was energetic and joyous, and, while never breaking character, I felt the cast were genuinely celebrating the friendships made over the past few years studying together.

Occasionally the scenes between Sondheim’s scores lacked in truth and communication between the characters. There was potential for the cast to develop and explore individual characters further, but when the music began the production was absolutely captivating.

Overall, Company was a strong performance by a number of up-and-coming Brisbane talents.

Congratulations cohorts on a striking performance, it was wonderful to be in your company.