If they havenâ€™t already crossed your radar, you can expect Sydney five-piece Sticky Fingers to come screaming into your stereos with their new album, titled Land of Pleasure.

With major success in the European market, and following Aussie popularity of their two most recent singles â€œJust For Youâ€ (an anthemic, keys-driven dance number) and â€œGold Snafuâ€, Sticky Fingers prepare for the release of their second album, Land of Pleasure, on August 1.

Formed in 2009 and gathering a crowd of 20,000 at Splendour over the weekend, these guys and their smooth blend of rock, reggae and blues really know how to craft a solid song.

Combining elements of big-scale Brit-pop, classic rock and psychedelia, Sticky Fingers create tunes such as â€œClouds and Creamâ€ and â€œCaress Your Soulâ€ (both of which cracked the Hottest 100, along with â€œAustralia Streetâ€) that are, appropriately, sticky. 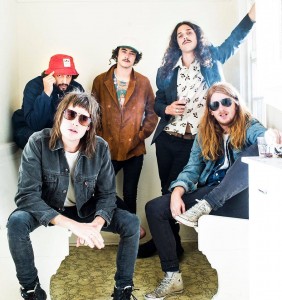 The boys behind Land of Pleasure.

Described as being â€˜biggerâ€™ than previous work released by the five, Land of Pleasure was drawn from recent overseas touring experiences- â€œWe came back from overseas as the hottest live band we’ve been … touring the world really expanded our sound,â€ said guitarist Seamus Coyle of the new style.

Stumbling into the studio merely a day after returning from a Euro-tour, Sticky Fingers laid down the album following a live-in method at Rocking Horse Studios, near Byron Bay.

“We worked obsessively in that studio day and night. You couldn’t have pulled us out of there if you tried,â€ said bassist Paddy Cornwall.

With an August 1 release date and an Australia, Europe and United Kingdom tour locked in shortly after, we can only hope that the boys will continue to gain inspiration from touring. Considering the excitement that influenced it and the surroundings in which the album was produced, Land of PleasureÂ is shaping up to be seriously good music- maybe enough to see Sticky Fingers become equally as popular here as overseas.