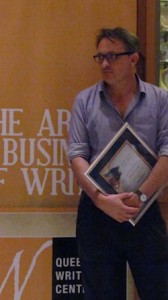 â€œStuart Glover has been a formative influence in Queensland writing through his decades of dedicated service,â€ says Meg Vann, CEO of QWC. â€œHe continues to be an extraordinary literary mentor and cultural producer, with a thoughtful and ambitious strategic vision for Queensland literary arts.â€ Â

Established in 2001, the Johnno Award is named after founding QWC patron David Maloufâ€™s eponymous novel, Johnno. It is presented annually to an individual or group in recognition of their outstanding contribution to Queensland writers and writing.

“I am delighted to have received the Johnno.Â  Malouf is a hero of mine.Â  He sees Brisbane and Queensland so clearly â€” so unsentimentally.Â Â  But Johnno is among the most Romantic and compelling of his characters.” Glover says.

â€œI have had the opportunity to work with nearly every organisation with a stake in local writing:Â  Arts Queensland, the Writersâ€™ Centre, the writersâ€™ Festival, UQ, QUT, QPIX, the Literature Board, Idiom 23, UQP, and many others. Queensland writing has changed remarkably in that time: it is bold and distinctive â€” and makes an incredible contribution to Australian and International letters.”

Congratulations Stuart from all of the team at Creative Drinks.