Winner of the Sundance 2016 Grand Jury Prize for U.S Documentary, Weiner traces Ex-Congressman, Anthony Weinerâ€™s New York City 2013 Mayoral race, which was meant to lead to his redemption, but instead ended in an embarrassing loss after yet another sexting scandal was uncovered.

You may know the grey briefs, but do you know the man inside them? Anthony blew up his career, and in the press, when the then Congressman accidentally tweeted on his public account a very private part of him in grey underpants. Whether youâ€™re familiar or not with the events, nicknamed â€˜Weinergateâ€ by the press, Weiner is a compelling watch. Directors’ Josh Kriegman and Elyse Steinberg offer an in-depth and intimate look at the man, and the self-imposed world he lives in. Anthony readily admits onscreen that in this mess of his own making, he is a punch line.

A â€˜fly on the wallâ€™ type documentary (for the most part), Weiner– perhaps more interestingly- affords viewers a glimpse of Anthonyâ€™s wife Huma Abedin. Accomplished in her own right, working closely with Hilary Rodham Clinton, Huma comes across as self-effacing, long-suffering, and capable. Frequently when Anthony is speaking, the camera is on Huma, trying to capture her response to his words. Most of the time her face is unreadable, arranged in a neutral expression, one she has probably had to master since her husbandâ€™s scandal broke. 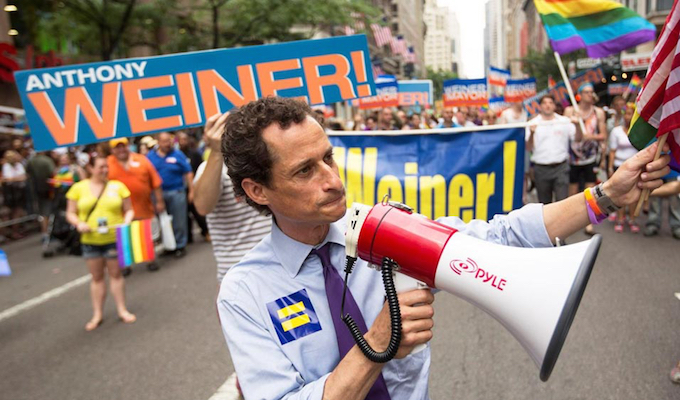 Kriegman and Steinberg perfectly capture the political and media climate in New York City at that time. At one point, in a parade on a New York street, (at the height of his popularity) the hype of Anthony running for Mayor is almost tangible – Anthony seems like a man of the people. He runs enthusiastically, energetically through crowds, swinging and flying the gay pride flag back and forth. Throngs of people cheer on, itâ€™s a party and heâ€™s not only invited but heâ€™s welcomed, beloved. This celebration is then swiftly cut to his running mate, Bill de Blasioâ€™s march; itâ€™s dead in comparison. Just twelve people holding banners, walking almost silently.

This contrasting cut touches on the merging landscape of entertainment and politics: where the political world has entered into the domain of entertainment, where politicians cannot just be policy leaders, they need to be performers, entertainers. A disturbing new arena where having the peopleâ€™s attention, having them entertained, somehow in a warped way, translates into having influence and power; having their support. This theme is particularly poignant considering the state of American politics right now, where Trump is the face of this scary new world.

This brand of politics could not be possible without the media and has intensified with social networking platforms. Weiner shows us that sensationalised news, with tawdry front-page headlines, is rated supreme. Although it was his own doing, Anthonyâ€™s story lived long in the press, ruining his image, career and putting a strain on his home life.

Weiner not only gives audiences exclusive access to Anthonyâ€™s political meltdown, but also surveys the political landscape and asks audiences to consider the farâ€“reaching consequences of modern politics and the media.