Switzerland is theÂ deeply satisfying and entertaining two-hander from one of Australiaâ€™s foremost playwrights, Joanna Murray-Smith.

Patricia Highsmith was an American novelist and short story writer who specialised in psychological thrillers. Sheâ€™s most well known for the suspenseful Tom Ripley series and for penning Strangers on a Train, later adapted into a film by Alfred Hitchcock.

The play imagines the last days of Patricia Highsmith in her home in the Swiss Alps, a cocoon where she protects herself from the disappointing lack of acclaim from the â€˜Dead White American Maleâ€™ literary establishment. Sheâ€™s visited by young, desperate Edward Ridgeway who works in a publishing house in New York and is present to convince her to write another great Tom Ripley murder before her impending death. 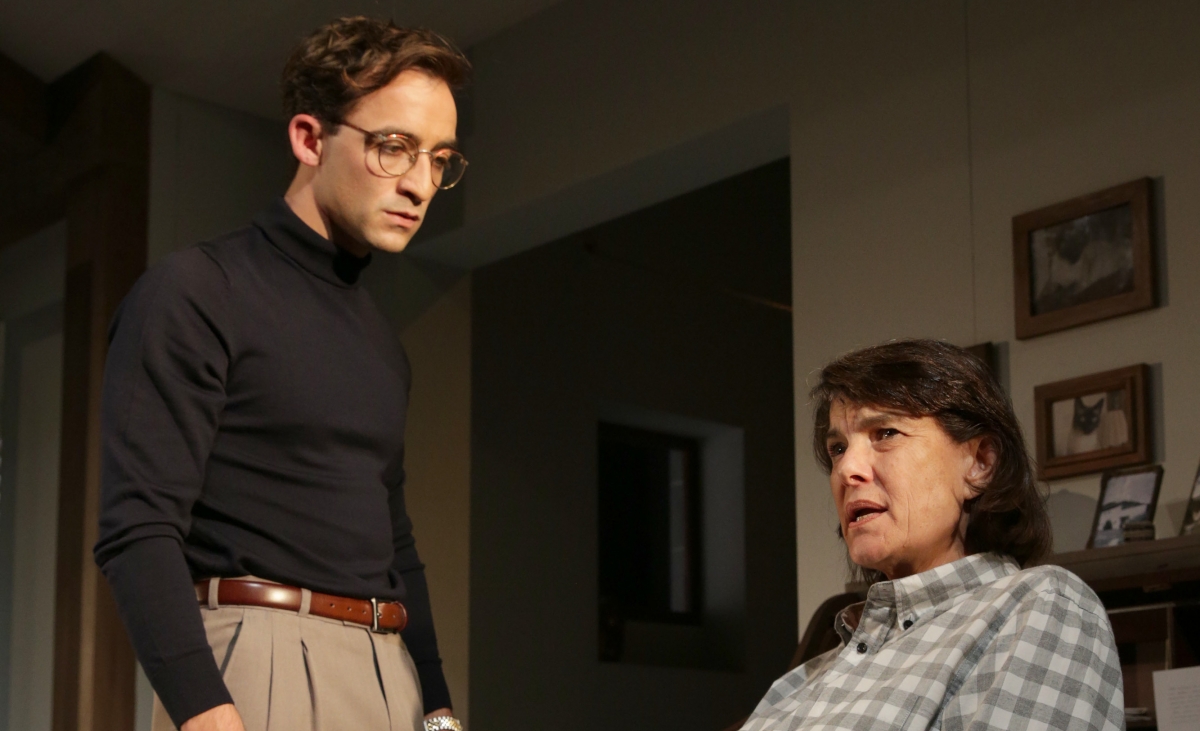 Like the work of Patricia Highsmith, Joanna Murray-Smith explores the psyche of her characters in a way that exposes deep and scary truths about the basic state of humanity while constructing thrilling and imaginative story.

During her life Highsmith placed a premium on transformation and believed that her tormented childhood shaped her into a great writer. On stage, Highsmith interrogates and makes assumptions about Ridgewayâ€™s life, revelling cruelly as he recounts the death of his parents. Ridgeway begins the play as a nervous and weak character but slowly evolves to grow on Highsmith through his keen observations of her own character and his sharp, eloquent tongue. As wonderful as this dialogue is, Ridgewayâ€™s own motivation faded away and he seemed to serve mainly as an exposition for Highsmithâ€™s character.

Andrea Moor (Highsmith) and Matthew Becker (Edward Ridgeway) both delivered exceptional performances. Moor felt every bit like she was the great novelist Patricia Highsmithâ€Šâ€”â€Šnot once did it feel as though she was performing. She commands the stage with such strength that youâ€™ll find yourself gripped by each word and every movement she executes.

Switzerland is darkly entertaining and the gunshot dialogue will have you absolutely captivated.

What: Queensland Theatre Companyâ€™s Switzerland
Where: The Bille Brown Studio, Queensland Theatre Company
When: In season until June 26.
How Much: $33-$78.
More Info: This production contains a blackout, coarse language, adult themes, sexual references, violence, replica weapons and herbal cigarettes. The use of photographic or recording equipment is not permitted inside the theatre.

The Adelaide Cabaret Festival – What Comes Next?