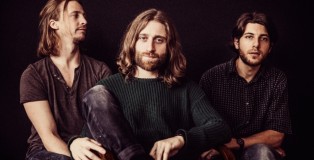 It’s been a busy year for Husky. After releasing their highly anticipated new albumÂ Ruckers Hill,Â the band have made a string of headline and festival appearances to crowds new and old, the intimacy of their live shows and soulful lyrics making for a moving and ultimately enthralling performance.
So when frontman Husky Gawenda sat down in a small, but thankfully air-conditioned backroom at Woodford Folk Festival, it was with a degree of restraint that I managed to keep the chorus of ‘History’s Door’ firmly under my breath.Â  END_OF_DOCUMENT_TOKEN_TO_BE_REPLACED