The Bamboos Are Back 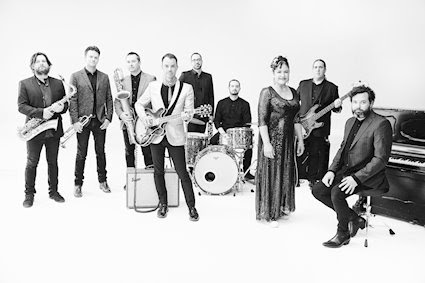 .…and they’re here to teach you a thing or two about funk.

The nine piece music machine from Melbourne have been kickin’ it old school since 1999. If The Bamboos were a person, they could legally vote – and they’d be cooler then you. They’ve also just dropped their eighth album Night Time People, and are about to be touring a city near you. We sat down with producer, songwriter and guitarist Lance Ferguson to talk about the past present and future of the band. We started off with a history lesson.

Lance Ferguson: “The band started back in 1999 when we were playing at this great venue in Melbourne called The Night Cat.  We started out as a four piece band, basically an instrumental band making people dance on a Saturday night. The whole thing has evolved so much over the last 18 years. Now we’re a nine piece, we’ve got a horn section. We’re into our eighth album now and there’s been a whole lot of change over that time, but I feel like there’s also been a lot of change in the broader musical scene. At the time we started putting out our own records, the whole explosion of the internet as a tool for musicians and artists really came into it’s own, so it was really great to ride that wave.”

The Night Cat is still kicking on a Saturday night, which is great news for The Bamboos as a self described “intrinsically live band”. They’re one of Australia’s most prolific touring groups, barely missing a trick in eighteen years. The Age called them  “the highest, tightest and easily the best live band of their kind in the country”, and they’ve garnered similar reviews from most of Australia’s prominent music media. We asked Lance what their secret is.

LF ” For some reason we’ve always been able to make it feel fresh and exciting. That translates to our recording as well. I say this every time, but I think I mean it every time; I feel like this is the best record we’ve ever made. If I ever stop feeling like that maybe it’ll be time to rethink things, but we’re luckily we’re able to keep the energy levels going and the excitement going. The lineup we have now has been solid for a decade, so we really feel like a family as well. Getting together and doing a show for us just feels like a reunion with your second family. That interaction with each other on stage, and with the audience is the most rewarding thing for me at least.”

TCI “Speaking of the album, can you tell us a little more about it?”

LF “There’s been an evolution, and with this new album I feel like we’ve really come full circle a bit after taking the band out on some really wild tangents over these last half a dozen albums. I feel like we’ve come back to some of those rawer sounds now, but hopefully with the development of the songwriting there as well. Our vocalist Kylie Auldist is the main feature across this album. I think there’s been some confusion in the past but Kylie is our lead singer and I wanted the world to know that.

The Bamboos are always moving forward, and they have no plans on slowing down. There’s more recording to come, a European Tour coming up, and the national tour to complete. The interview ended on a reflective note when Lance talked about what he’s most proud of when it comes to the band;

LF “I think the notion that the band is still going eighteen years later and we’re still just as hungry and excited and ambitious to continue developing our music and make each record sound better, I’d say that we’ve been able to sustain that is something I’d say I’m proud of. I’ve worked with a lot of musicians and seen a lot of artists come and go, and I don’t think something like we have comes around all the time.”

I think it’s safe to say he’s right about that one. If you’re keen to dance away a Friday to the rhythm of the best funk and soul Australia has to offer, you can catch The Bamboos at The Triffid on the tenth of August, and you can grab tickets here. You can check out the new album and other music here.