The beating Art of the Mind: Spectator Jonze, Matt Stewart

The issue of mental health is, for many Australians, and people internationally, a hugely important part of leading a healthy and stable life. However, the conversation about mental health is a difficult one, and much ignorance surrounds the topic and hampers recognition of this widespread and intricate issue. But groups like Anglicare are aiding the cause, with projects like the Arts and Minds campaign.

We recently spoke to two of the representative artists involved in the campaign. Spectator Jonze, also known by her music performance moniker Deena, and Matt Stewart, Australian contemporary fine artist.

We initiated the interview with a simple question of what had initially attracted these artists towards their creative pursuits. Spectator Jonze explained to us that “… it was just a thing I’ve always done since I was little. Growing up, I was always very guarded, very closed off as a way to survive, like a bit of a survival mode and creative pursuits were a way for me to let go through catharsis, and undo all the stresses, all the worries, all the traumas, all of my emotions in a way that worked for me [that I could control], so that’s why I went into creative pursuits. 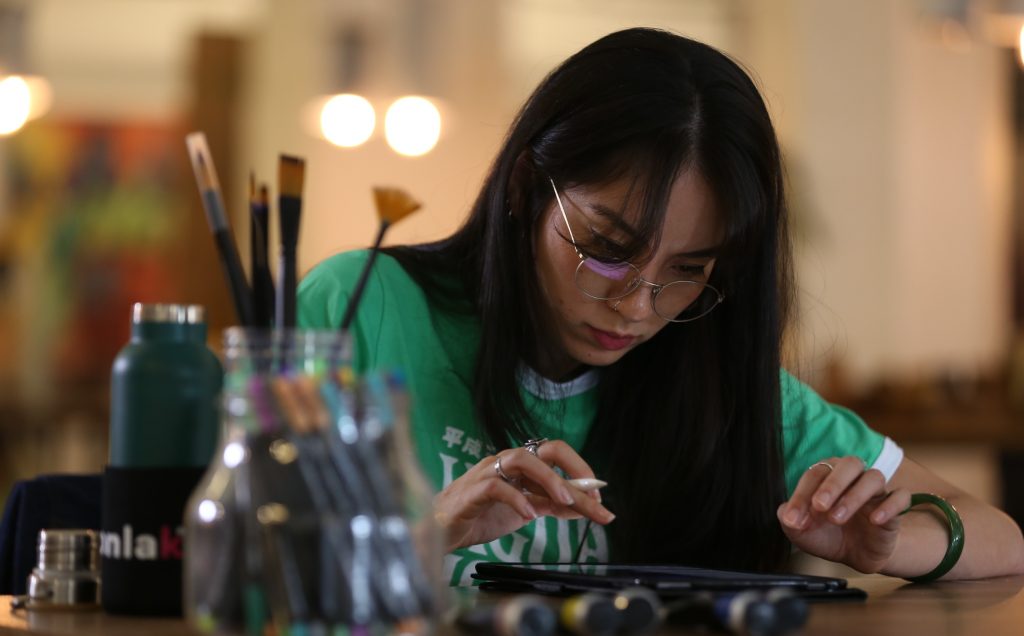 While Matt Stewart said “I’ve always been creative, all through high school [and then] I went out into the graphic design world and worked in that sort of industry for a while and then moved myself into marketing and branding and then as I was doing all of this, I was continually painting as well and then it got to the point where I ended up going full time, almost eight years ago now. But I’ve always had [an interest] and my full-time career has always had a creative angle. So, it was quite an easy transition, when I decided to go into the painting side of it full-time.”

We continued by asking the artists’ plans or hopes for exhibiting their works through the Hearts and Minds webseries and gala. Spectator Jonze, whose deep connection with the cause drove the interest in the project stated in no uncertain terms that, “when I started my drawing project I had [meaning] behind everything and it’s not just drawing. So when my friend told me about Arts and Minds, it really aligned well, with what my project is all about … my hopes for this Arts and Minds campaign, is the very same thing that I started the project for, which is raising awareness, uplifting that taboo of talking about mental health and displaying that we all have our unique state of mind, and that is should be celebrated rather than suppressed or hidden … to contribute to that conversation.”

Matt following up with the fact that he “… went into this [project], to obviously help the situation, and help the cause, I think really most of all, was to create a piece that not only covered the aspect that I was given, but also to raise enough money in the sale of it … to go to Anglicare to help the situation, that would be amazing. Exhibiting-wise, any aspect in media, where I can get my work out in front of people … and open their eyes to the situation with mental health and creates awareness would be [also] be amazing.”

Given the importance of the issue of mental health, we respectfully enquired as to if there was any strong reason as to why this project and the conversation of mental health were important to the artists, to which Spectator replied, “Talking about mental health is so important to me because up until last year, I never talked about my own mental health and drawing was a way for me to slowly unravel and do that, in a way that was comfortable for me.

I interview each of my subjects before I draw them, and I found that when I started these individual conversations and started sharing and they started sharing with me, it started a healing process that I didn’t even know was so valuable and I do a self-portrait every ten drawings, and you can just see from the first one to [the latest one], how much I’ve healed and opened up and grown since then.” 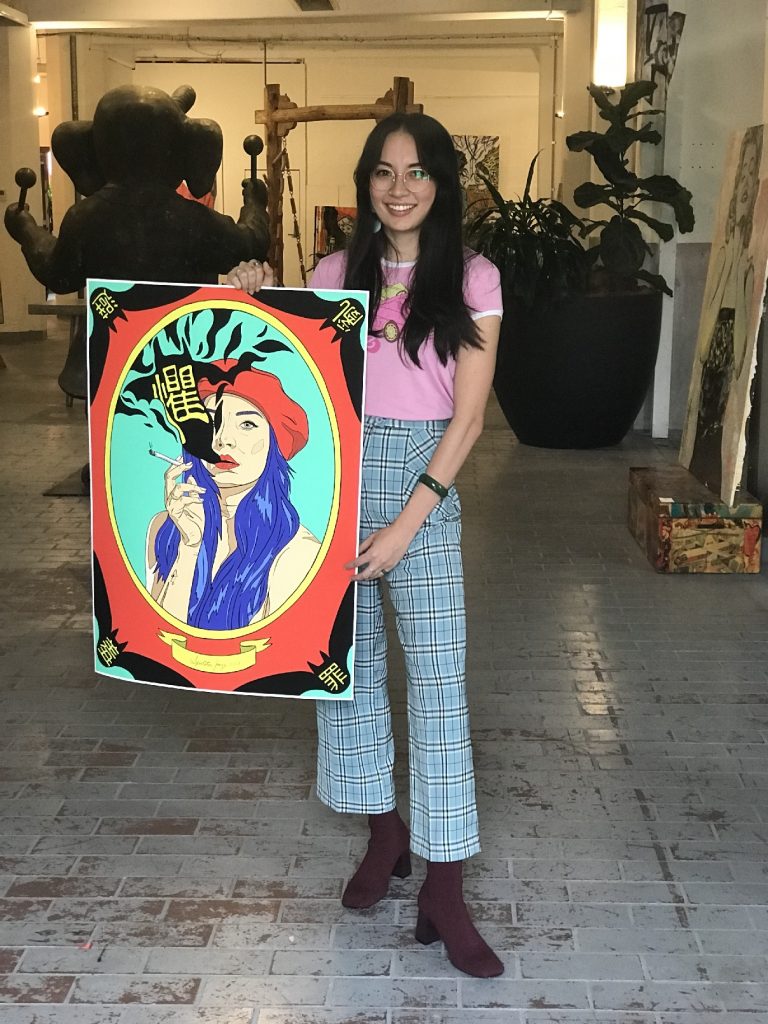 I think talking about mental health is so important because the first time you do it it’s so uncomfortable, but then the second time you do it, it’s just a little less uncomfortable and then slowly you realise that you’ve accepted who you are and understood and grown your self-awareness to the point that it just becomes a part of you rather than against you.”

Matt, in turn, echoing some of these points, “I think it’s something that is just as important as physical health, but because of the taboo that is always put on it in society, it isn’t really talked about as openly. Where physical health is … talked about quite widely through the general media, but I think mental health is not, and think it’s something that is … being spoken about more often, but it’s just something that people are generally uncomfortable about [as] they don’t know anything about it. I think there’s a stigma behind it … but there are so many aspects of it that affect people in their daily lives and it may be something that’s very minor, but it still comes under that umbrella.”

Beyond the Arts and Minds campaign, we were curious as to whereabouts globally the artists would like their works to be displayed and exhibited. Spectator quite modestly answered, “I would love to be in GOMA … you gave me the world and all I thought of was GOMA [honestly] some awesome art gallery in New York or Paris … would be fantastic, but I really would love [my work to be shown] in GOMA or even [the] National Gallery of Victoria, those are two galleries that I’ve grown up with and they have some of the most inspiring exhibitions and it would be so great to be a part of that … it would be great to be a part of the GOMA family.”

Whereas Matt showed somewhat loftier goals for his work “I think New York … is something I’m working towards and having a solo exhibition over there within the next twelve to eighteen months … I know that my work fits in really well to that culture … in particular Brooklyn.” 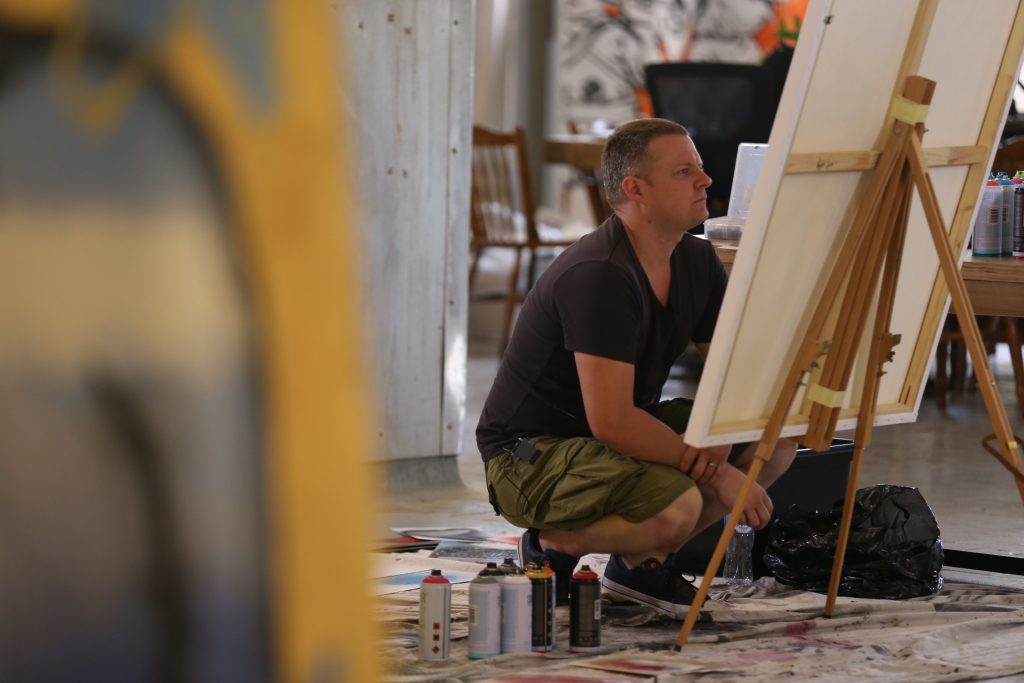 The artists then offered their advice to anyone creatively focussed, out in the world and seeking success, “I really think it’s about defining your own success, we get so strapped down by society’s version of success that we lose track of what we have accomplished so far, and what we actually want in our lives and if we’re able to just be stubborn and strict about defining your own success you’ll find that then, you’ll be able to [generate] stability and happiness in your own creative pursuit.”

“I think a piece of advice that is given in a lot of business [is] just really keep going, and don’t give up and you will get so many knockbacks, whether you’re successful in a short amount of time, or whether it takes you a bit longer, you will get knockbacks, and you sort of have to get used to hearing the word no, and dealing with it knowing that it’s okay … knowing that there’s something better around the corner.”

Curious about the reasons behind the pairing of Spectator Jonze and Matt Stewart for the Arts and Minds campaign, we asked for their thoughts on the cooperative coupling that had been arranged between them for the campaign, Spectator says she “really thinks that Matt and I was a great combination, he himself works in a lot of bright colours and he’s also quite bold in his style, very attention-grabbing, and I think [my style] is similar … it was a lot of fun to work with Matt and I learned a lot from him and he gave me a lot of advice that I really appreciate as well, so I really look up to him as a mentor already.”

Matt’s opinion following very similarly, “I think her artwork is very pop-art focussed and the bright [bursts] of colour are very similar to a lot of pieces that I paint, so I think our art styles are very similar and I don’t know if this is coincidental or not, but we also have very similar personalities, she’s very bright and bubbly and outgoing and sees her art as something that’s fun to do. I think probably mostly the visual aspects, but definitely those two reasons.” 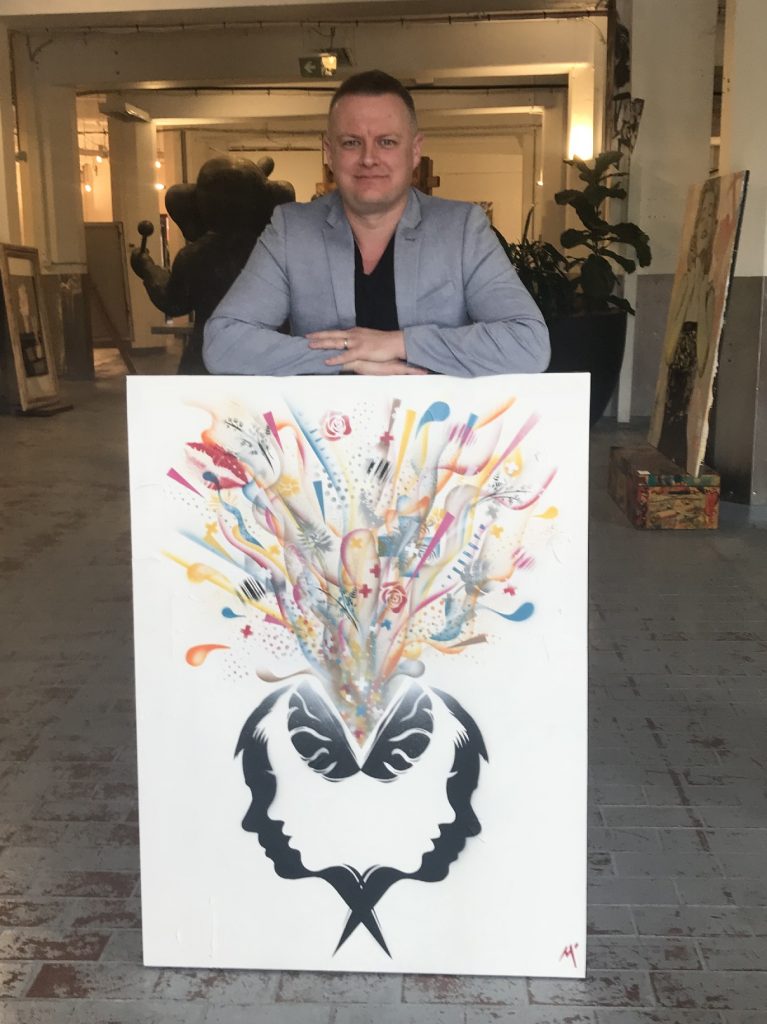 We concluded the interviews and asked for the pair’s parting words, Spectator saying that she “really thinks [it’s important] to not be afraid of speaking up about [mental health]. Which can be in any way that you want, because we’re all humans, with our own ways of communicating.

For me, that was in a creative pursuit, which has been so important for me. So if it’s running or cooking food or” she laughed “woodwork, or just calling up a friend and talking about it, I really think [it’s important] to find your way, and to do it, to stay on top of yourself”

Matt’s parting words were, “Just keep doing what you love, that’s the most important thing … it sounds very cliché, but if you’re pursuing something and doing something that you absolutely love doing, you’ll enjoy it so much more than if it’s something you need to push through and has aspects about it that you don’t enjoy [then] it becomes a real chore, so definitely do something that you love and you’ll never work a day in your life as they say.” and we couldn’t have said it better ourselves.

THE DETAILS:
What: Arts & Minds By Anglicare
Where: Website
Webseries:
Monday 23 April 2018
Gala:
TBA
How Much: Free – TBA