Next Saturday, Brisbane band The Bonnie Doons play at Crowbar as a part of this year’s Mountain Goat Valley Crawl (MGVC).

The Bonnie Doons have been playing shows around Brisbane for a while now and with a couple of singles under their belt, we’re ready to hear some new music and a body of work from the guys. They boast a sound of tight funk-rock tones so they’re certainly not a band to sleep on.

Having played with legendary Australian band, Wolfmother, as well as scoring a support slot with Bootleg Rascal at their Brisbane show, we recommend you check them out at MGVC. We had a chat with Kane, the guitarist and vocalist, about MGVC and new music.

The Creative Issue: It’s been a while since we’ve heard some new music, have you got some more songs you’ve been working on?

Kane Kennedy: Yeah so we’re working on an EP right now which is due to be released in February. And we’ll drop a single from that at the start of February.

TCI: Where do you draw inspiration for your songs?

KK: I guess it was a bit of a mix of things. We’ve called this EP Face To Face, it was the first song that myself and Benny, the lead singer, wrote together. And that was a bit a festival sort of theme like losing your mates and finding them in the crowd face-to-face. So that was where that one came from. Then other songs are I guess from relationships, bit of heartbreak, girls, that sort of stuff.

KK: For me it would be Red Hot Chili Peppers, the guitarist John Frusciante, we’ve definitely taken inspiration from Ocean Alley and Sticky Fingers. And a bit of Oasis as well.

TCI: If you could tour with any band, who would you tour with? 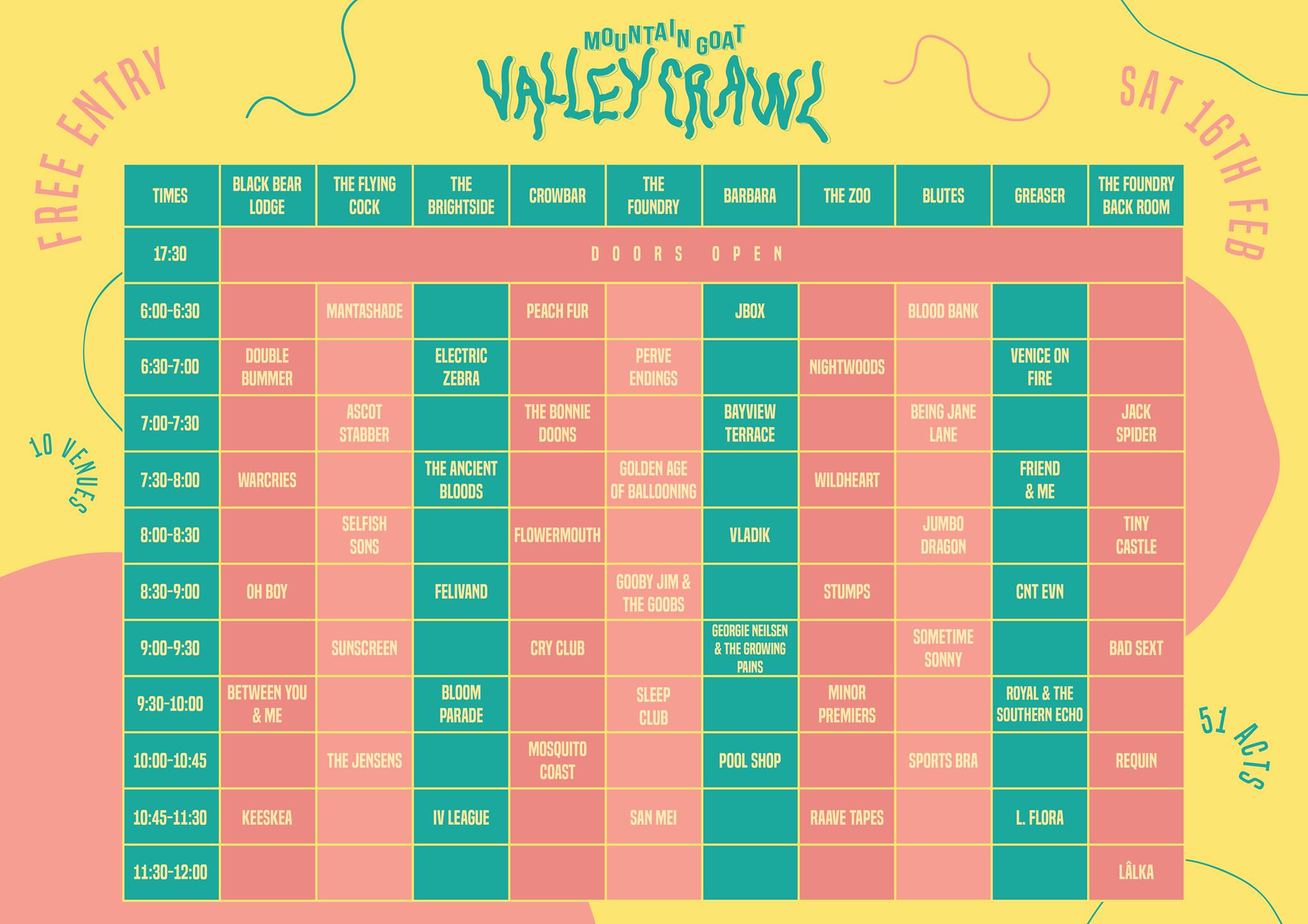 TCI: How do you prepare for shows like MGVC?

KK: I think we won’t really do anything different for Valley Crawl. We’ve got a heap of shows before that so we’re gonna be on top of our game regardless. I don’t think we’ll do anything extra. We were gonna try and add in a bit more of a show element. Benny was gonna do some sort of crowd work stuff but other than that we weren’t gonna do anything too hectic. Just keep practicing and playing the other shows.

TCI: Why should people come and see you? What can they expect?

KK: I think we have some pretty tasteful music that a lot of people can enjoy. It’s not for the young punk crowd. A lot of older people tend to get around it as well. We go pretty hard when we play, we like to jump around and have some fun.

TCI: Are there any other artists that you’re keen to see at Valley Crawl?

KK: The ones that I’m more keen to see are our friends bands like Georgie Neilson & The Growing Pains. I’m keen to see The Jensens. I haven’t seen them but I know a few guys in that band so I’m keen to see them. I’ll probably just spend the whole day there watch everyone.

TCI: What does 2019 have in store for you guys after the EP?

KK: After the EP, we’ll probably take a little bit of a break. We’ll launch that on March 23rd in Brisbane and then on the 5th or 6th of April in Sydney. And then we’ll take a bit of a break then we’ll pretty much get straight into some new stuff. I’ve got a second EP and the music’s almost done. So I think we’ll start working on that as soon as we’re all ready. It’ll probably be out by the end of this year I’d say.

Get in early to catch The Bonnie Doons at Crowbar at 7pm. Not only is the MGVC free entry, but good vibes and great tunes are guaranteed.