The Happy Cabin breaks into comedy

Comedy at The Happy Cabin actually takes place next door, on the freshÂ astroturfÂ lawn of Nostalgia Haus â€“ okay, it’s a garage, but quite a nice one.

Of course, the night’s tone (and audience) still flow directly from The Happy Cabin, a hipster boutique with serious West End credentials. There are shirts with antlers and kittens.

Guests bring their own blankets and cushions, or perch on inevitable milk crates in an atmosphere somewhere between polite share house and polite music festival. 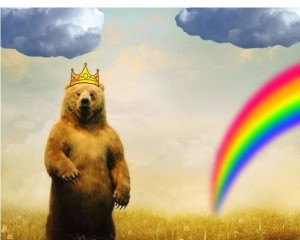 Comedy at The Happy Cabin Poster. Image by Josephine O’Brien.

It’s a drastic change of scenery for most stand-up comedians, who are typically (let’s face it) pretty caustic personalities standing in the most depressing rooms you’ll ever find: there are pokies.

Jacob Lingard seemed happy to escape the beer-and-Keno circuit, if only briefly.

â€œHave you ever been to the Shafston Hotel? It’s like performing in Coyote Ugly.â€

All the usual opening night hitches â€“ late performers, a malfunctioning microphone, practically no audience to speak of â€“ pushed things back half an hour, giving me plenty of time to soak in Brisbane’s humidity.

Nights like this (literally on street level, with free entry and a generous attitude to bare feet) are perfect for West End. There’s still a community here.

It wasn’t long before the fashionably late regulars arrived, more or less filling the little strip of fake grass.

A nervous Michelle Azevedo kicked off the acts, followed by greenhorn Leah Musch (who owns The Happy Cabin) with a set consisting entirely of Articulate games.

MC, Aaron Gocs stitched things together in blokey, self-effacing style immediately at odds with the audience. He managed to win most of the room over eventually, but still seemed a mismatchedÂ candidate for the role â€“ touch and go.

In fact, most of the night’s awkward moments blossomed from this meeting of worlds, the gentle skewering of left-wing touchstones: global warming, land rights, matters of West End consensus.

This is, of course, a great thing. 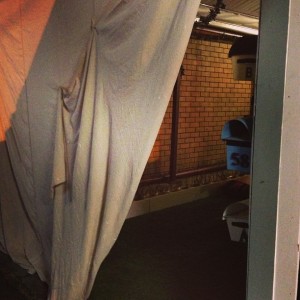 The entrance. Image by Leah-Jane Musch.

It means the organisers have found a new audience for comedy, fresh faces still shocked by (for instance) Matt Ford’s suggestion that whales should be killed, or Jacob Lingard’s threats to beat someone with a belt.

Angus Gordon closed proceedings with his distinctive brand of shirtless performance art. Whatever you think of alternative comedy as a label, it’s hard to imagine his surreal, personal storytelling in a traditional stand-up haunt.

This is a clever, experimental night with a beautiful sense of place.