“Footy: It’ll break your heart.” Quite, well partially. It can be quite funny, mostly.  Except when it gets too saccharine or too serious. The Longest Minute premiered last week in the Crenmore Theatre and for many brings the raw passion and energy of stadium sports to the stage. It follows the burgeoning life a diehard Cowboys fan Jess, and her family, as they watch their team ascend the coarse rope of the National Rugby League to the 2015 NRL Grand Final.

Jess was born the night of the North Queensland Cowboys’ first game in Townsville. Indoctrinated into the game by her father and local Rugby legend Frank ‘Black Flash’ Wright, she becomes infatuated with a sport that wasn’t ready to embrace her. The story is told through humour and an impressive foray of lighting and sound effects. The non linear, narratorial styles makes the play engagingly cinematic in style. The cast are excellent with their energy and enthusiasm creating a charm that sustains the play through some perhaps slightly insipid or surprisingly sombre moments.

They all stride onto the stage like youth coordinators at a Christian camp. Except this is no chaste contrite affair. The language is blue but genuinely funny. It creates a lucid, foot stomping arena energy. Although none of the rugby the play centres around is shown or played, the audience is wrapped in the spirited performances of the leads. Chenoa Deemal as Jess holds the play together with a vibrant, youthful demure and Louise Brehmer is particularly excellent as the gruff but supportive matriarch of the family. 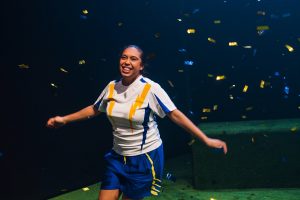 The play touches upon the social divides that exist in Australia between the indigenous and non indigenous people. Jess is biracial and throughout the play herself and her brother Laurie (Jeremy Ambrum) experience racism and setbacks for their ancestry. Football here is emblematic for something that is cross cultural and the humour in the play doesn’t shy away from elucidating on a topic that is handled with far less aplomb than other more ‘serious’ productions.

Its not all free kicks and high fives however. There is an unexpected death in the play that brings the tone down and renders around 5 minutes of the performances into a paroxysm of screaming matches. Here, one begins to wonder whether this was necessary at all. The audience is already connected to the story and characters. Afterwards, the laughs that remain are somewhat truncated from an emotionally deflated audience. 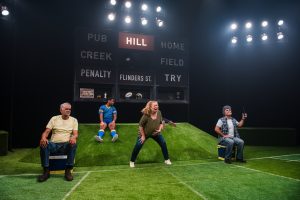 With this in mind however, The Longest Minute is ultimately about passion. As the final whistle is blown the audience leapt to their feet stomping and clapping for the cast in ecstasy. Many seemed sports fans first and theatre go-ers second. The art of gripping story telling then transcends the medium. Whether in the stadium or on the stage if performances are powerful enough we can all get behind the team. In the end, everyone in the theatre had become a Cowboys fan and everyone celebrated the result. As if we didn’t already know the final score.

What: The Longest Minute will run from the 26th of May until the 23rd of June

The Dollhouse Inside: Cassandra and The Boy Doll