You donâ€™t know why but for some reason your bottom lip is quivering uncontrollably, your eyes feel far too damp. Itâ€™s only a movie you tell yourself, as the young couple embraces on the screen.

Well, now you can blame the running mascara and tear garnished popcorn on people like David Bruggemann, composers. Those who work behind the scenes hitting every note that makes your eyes water or heart jump.

With a talent for music, David began composing at a young age, later becoming involved in the Queensland Conservatorium working on a multitude of music videos and short films.

Radio treason, however, is his first full length feature.

Based upon a true slice of Australian history, the uplifting WW2 drama follows the capture and imprisonments of an Australian radio personality John Miller.

While detained by the Japanese John is forced to broadcast propaganda within the POW camps to allied forces.

Complete with both romance and patriotism Radio Treason captures the true essence of the 1940â€™s in Australia.

â€œItâ€™s about never giving up hope and keeping the feeling of home alive,â€ said director Jade Hassett. Written by her sister Gemma Hassett, Jade finds it easier to create a hegemony between their vision. 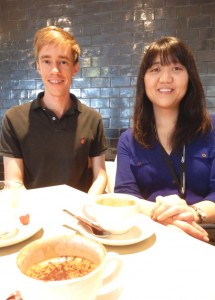 â€œI think we both connect better and can be a little more honest to one another Â which is sometimes helpful,â€ said Jade.

Itâ€™s this hands on approach and connection that seem to have given both David and Jade and overwhelming enthusiasm for the production.

â€œCommunication is key, you always need to talk before hand. Â I admire Clint Eastwood as a director, he works with such a comfortable and calm approach the actor always performs their best. He usually gets his best stuff in the first take,” said Jade.

Working very closely with both the director and producer David sets to work on the roughcuts of film.Â  Guided by the emotions within the scene he creates music to draw that out of the audience.

â€œThe hardest part within the production process is to be stuck staring at a blank sheet of paper with the scene running infront of me. But itâ€™s an incredibly enjoyable process,Â  itâ€™s what I want to do,â€ said David.

Expected to take around 2 months in total, the 60 minute film the score is composed digitally, pulling samples from a variety of instruments.

â€œI am looking forward to working with a lot of traditional Japanese music forÂ  this film,â€ said David

Four years in development Radio Treason will be shot next year locations around Brisbane and the Gold Coast.

Please, books are by no means ‘dead’