DiCaprio’s furry face will confound you.

As the annual sport of Academy Award predictions swings into season,Â many are left bewildered by Alejandro GonzÃ¡lez IÃ±Ã¡rritu’sÂ ‘The Revenant’. The director won three oscars for his last effort and is now teamed up with the only superstar without an Oscar, Leonardo DiCaprio. A betting man would surely give this film good odds on knocking out all of the major awards categories. However, many who have seen it are not so sure.

‘The Revenant’ sees gruff mountain man Hugh Glass (DiCaprio) mauled by a bear and left for dead by John Fitzgerald (Tom Hardy) in an unkind winteryÂ wilderness, miles from help. Glass struggles back to health, and crawls to civilisation in search of revenge. ‘The Revenant’ fittingly managed to advertise itself, though it’sÂ famously plagued production spanned three different countries over the course of nine months and achieved a budget that blew 75 Million dollars out of control. 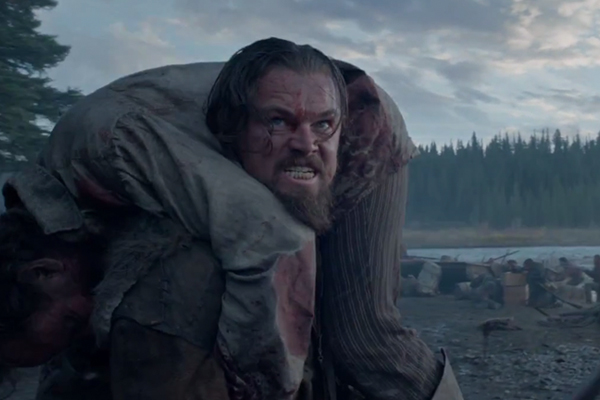 The best part ofÂ this film is the first ten minutes, which isÂ about as surprising and nail-biting as the film gets. After that, everything is predictable and the pace slows to a dawdle. However, I would never in a million years say that ‘The Revenant’ is a bad film. Everything is absolutely top drawer, first rate film making and nothing to complain about. Leonardo DiCaprio and Tom Hardy are acting juggernauts. Alejandro GonzÃ¡lez IÃ±Ã¡rritu’s direction has, somehow, improved since ‘Birdman’ (2014). This film has solidified his place in the pantheon of great cinematographers. What holds ‘The Revenant’ back, however, is it’s faithfulness to history. A glance at the wikipedia biography of the real Hugh Glass tells you every plot point in the film (so don’t read the wiki page if you want to enjoy the film). One could even infer what happens from the plot synopsis alone. This is because everything that happens in the film makes sense, it happened in reality. There was nothing creative about the story, nothing that I couldn’t imagine would happen in that situation, which made for a dull storyline.

On the one hand ‘The Revenant’ succeeds at everything and on the other it fails. The best way to watch the film is to be completelyÂ oblivious to the story before you walk in but know every little detail about the production. So, in an effort to make your experience just a little bit better, remember these things during the screening:

The Revenant had it’sÂ Australian release on the 7th of January.Â

Venture Into the Abyss With Point Break