The Rocky Horror Show has been entertaining audiences world-wide for more than forty years and it shows no signs of slowing down. The cult classic returns to Brisbane for a limited season.

The buzz in the concert hall was undeniable as audience members took to their seats last night for the opening of The Rocky Horror Show at QPAC. From the very first note of Science Fiction / Double Feature, the energy was infectious and it continued throughout with its edgy choreography, energeticÂ music and hilarious and quick-witted dialogue. Over the years, it might have lost its shock factor, but one thing is for sure, it still has its enthusiasm and sinful stage presence.

The tale of two naÃ¯ve lovers that become stranded in a storm and seek shelter in a mysterious castle that is home to the transsexual Dr. Frank-N-Furter is one that is familiar to many. Therefore, it is essential that every staging can find a new way to deliver Richard Oâ€™Brienâ€™s daring sexuality, and rebellious material. This does not seem to be a problem for director Christoper Luscombe who has an outstanding cast to work with.

If there were any doubts of Adam Rennieâ€™s portrayal of fiery Frank-N-Furter, they were abolished within the first few seconds of his heels hitting the stage floor. His voice was powerful and sensual as he seduced the young couple. Itâ€™s not easy to re-create such an iconic character, but he does it effortlessly and brings his own humour to the role. 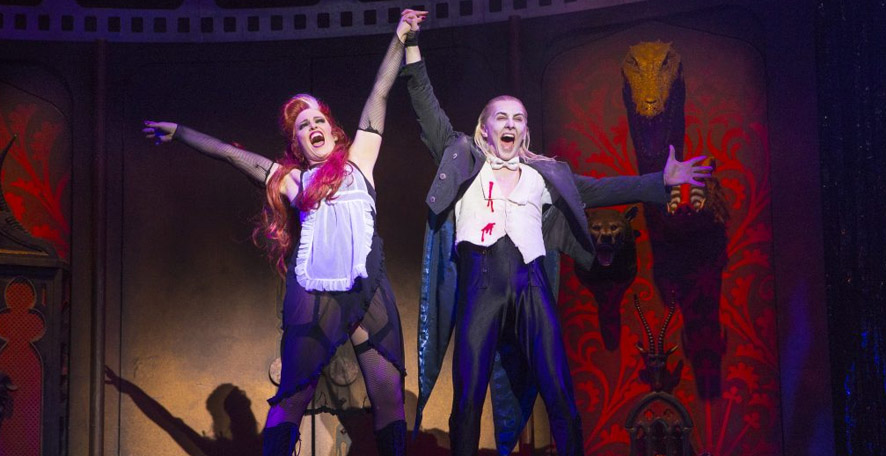 Set designer, Hugh Durrant created an opening scene that featured childish cardboard cut outs, which allowed the audience to gain an insight into the lives of innocent and naÃ¯ve Janet and Brad played by Michelle Smitheram and Rob Mallet. Â From then on, the set transports us into the absurd world of sci-fi and rock’n’roll superbly. The vocals of the cast exceeded expectation, a challenging task considering how loud the audience were singing. Nick Riching provides the perfect late-night picture show lighting with his dark and rich shadows.

The second half of the show is where things begin to really pick up. The production examines the emotional finale of the complex Frank-N-Furter. The actors on-stage handle the themes of loss, identity and sexuality in their own unique and outrageous manner. Itâ€™s not every show that you have the whole audience up in their seats and dancing along to every word. One thing is for sure, it’s time to slip into the stilettos and pull up the fishnets and do the Time Warp!