Standing outside a darkened studio on the industrial edge of Fortitude Valley,Â it feltÂ  more like the beginning sequence of an NCIS episode than an interview.

However, the offer of a sneak peak at Grand Pavilionâ€™s latest EP, Secrets was not something any self respecting Brisbane muso could miss.

Within the first five seconds of entering the studioÂ it was clear that lead vocalist, Tom Hunt’s vision for Grand Pavilion extended far beyond this next EP.

Releasing their first self titled album late 2012 the electro pop duo have only recently cracked the live music scene, playing a few shows this year.

Sharing the stage with the likes of Fox and Fowl, Grand Pavilionâ€™s melodic synth and pop undertones bring something very different to the stage.

â€œThe live band accompaniment makes our shows very organic, we want to be giving our audience something new every time we go on stage,â€Â said Tom. 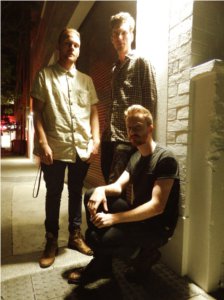 â€œWe want to eventually use vector mapping and have visuals synced to the music,â€ described Tom, drawing inspiration from Ratatat stage shows.

After meeting during a collaboration in their final year at uni Tom and band mate, Stuart McNair have married their electronic beats with often intricate pop lyrics.

Self described as â€œpastel and freshâ€ Grand Pavlionâ€™s EP titled Secrets takes the band in a slightly more electronic direction with a lyrical focus.

The boys have also promised a folky showcase within the surreal glitch and expansive sounds emulating tastes of Bon Iver, Bombay Bicycle Club and the pop sensibility of Firendly Fires.

â€œElectro has been around for a long time however capturing the pop sound really gives our style it’s ownÂ unique feeling,â€ Said Stuart.

Secrets will be a six track EP including the bands latest singles, Footsteps and Stranger.

January next year Grand Pavilion head on their first tour covering a majority of the UK and Western Europe, their fluid aesthetic appealing to the European audience.

The group also aim to do some on location recording in a variety of studios while abroad.

â€œIâ€™d love to do some vocal tracking in a cave and collect sounds while on the road,” said Tom whoâ€™s also produced remixes for Cub Sports and a variety of Scandinavian artists.

Remember to watch out for Secrets, set to drop mid November.