After staying relatively low-key during the hot mess that is COVID, The Smith Street Band plan on returning to their roots, playing fifteen shows in pubs and theatres across the country.

Renowned for pouring their energy into constant touring, the last eighteen months of lockdowns and restrictions were of course a challenge for the band, but one that was overcome with true Smith Street grit.

The band managed to record a studio album plus three live albums, with lead singer Wil Wagner also putting out a solo album and re-releasing an old demo collection – with all six releases landing in the ARIA Album charts.

Smith Street also punched out as many live shows as possible, including Yours & Owls Festival and acoustic sets for seated crowds in Sydney, Melbourne and across regional Victoria. They even played alongside The Brisbane Symphony Orchestra, at two sold out shows in Brisbane.

This will be the band’s first ‘regular’ tour since they released Don’t Waste Your Anger – their fifth studio album that landed them Triple J Feature Album and scored them #1 on the ARIA album charts. The tour also will celebrate the ten year anniversary of their breakthrough debut album No One Gets Lost Anymore.

With the return of dancing, moshing and anthemic, slurred sing-a-longs, the tour will be a celebration of not only how far the band has come, but how far all of us have.

I was fortunate enough to chat with Smith Street’s drummer and all-round music legend, Matt Bodiam. We discussed the band’s creative process and growth, what to expect from the upcoming tour, and the appreciation of simplicity.

The Creative Issue: First of all – how are you all? How do you feel finally having the chance to tour together again?

Matt Bodiam: We’re all going as good as we can, just trying to navigate lockdown and restrictions at the moment, keeping in touch and preparing for the tour ahead. We are all super excited to tour together again – we’ve had some recent experiences playing in theatres with orchestras and doing some more acoustic sets which have been amazing, but we’re ready to play those high energy shows in sweaty, dirty pubs and proper standing venues again.

TCI: Smith Street is made of so many talented members that have come and gone over the years. When and how did you first join the band?

MB: Yeah I first joined two or three years back now (replacing original drummer Chris Cowburn), but I was always involved in the band years before that. I worked as a tech and helped record a bunch of past songs in the home studios that we built ourselves. It was natural to start playing in the band as I knew them and knew how everything worked.

We have most recently said goodbye to Lucy (Wilson) who left the band. It was very bittersweet and sad – we loved having her in the band, she’s Queen Mum, but her other commitments on top of the band and of course COVID just became too much for her to handle, especially because when restrictions lift we’ll be touring almost immediately.

TCI: This tour will celebrate the ten year anniversary of Smith Street’s beyond successful debut album No One Gets Lost Anymore – looking back to when the band first released this album into the world, do you think anyone knew it was going to have such a special impact?

MB: I don’t think anyone went in knowing it was going to be so successful. The band had hopes of course and were confident in their creative skills and sound, especially since Wil had been songwriting and performing solo for so long, honing his craft. But the band didn’t have a label or any other advantages at the time – it was all recorded in a little bedroom studio above a pub in Melbourne, for about $2000 I think. The band had just decided it was time to take that step and record what they had, and whatever came from that was just a bonus.

We also never got to really celebrate our release of Don’t Waste your Anger, as that was released just before the lockdowns hit, so the tour will be a combination of both albums. 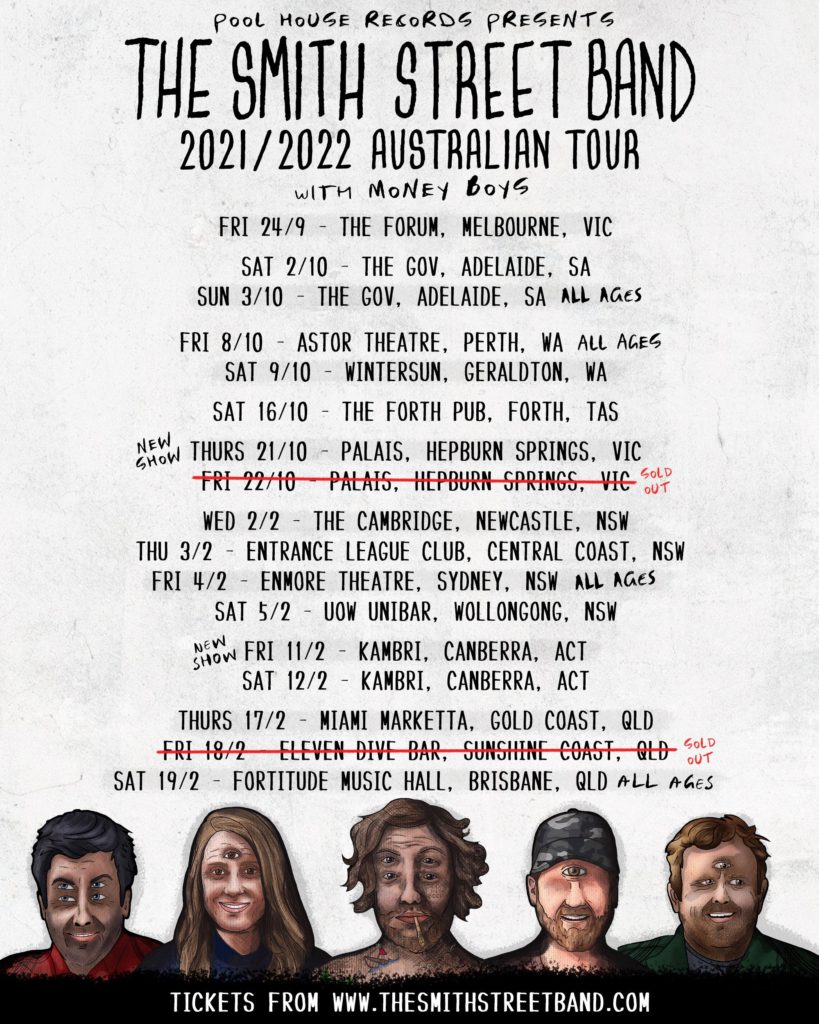 TCI: How do you feel the band has grown since their debut?

MB: We’ve always been open to trying new things and to change, but our creative process has mainly stayed the same over the years – Wil writes a new song pretty much everyday and will come to us with about 40 songs to sift through, and after putting our heads together we end up cutting that down to about 20-25 songs. I think we’ve matured individually though and just become better musicians over time – the more we’ve played and recorded together, and worked out the best ways to utilise our self-made home studios, the better we’ve become as a band.

TCI: Wil Wagner, your lead singer, writes most of your music, and it’s always very personal and specific – how do you guys go as a band bringing it all together? Do you all have to relate to the song to bring it to life?

MB: Yeah, as far as songwriting goes, lyrics have always been Wil’s domain, but he is very open to the band’s input and constantly asks for our opinions. I don’t think it’s ever been hard for any of us to relate to his songs because even though they’re specific to him and his life, they’re all universal experiences and emotions – love, sadness, it’s all relatable and just part of life. It can hit hard when you know Wil personally and hear some of the words or verses he’s written and felt…but we all feel and connect with it, especially as we spend time together developing and recording the songs we decide on.

TCI: Smith Street has always been known for electric performances of pure energy release and exchange – because each song is such a personal recount of whatever you’re battling with at that moment in time. How do you think it will feel then performing those songs that were written ten years ago?

MB: We definitely find new appreciation for them – especially the pure simplicity and honesty of those earlier tracks. It’s always been great to be able to play them years later and flashback to us making them without any goal or specific idea in mind  – we all just played our parts, added a ‘crash’ or a ‘bang’ where we felt it and it was done. Simple as that. We’ve been able to play two or three tracks from those earlier albums that flow through the sets over the years, those classics like ‘When I Was A Boy I Thought I Was A Fish’, but yeah, to finally be able to play the rest of those albums that people wouldn’t have heard live before will be an awesome experience.

TCI: Mental health has always been a prominent theme in Smith Street’s music. As artists and performers, it’s no secret you get a large part of your serotonin fix from live shows and tours. How did you guys cope through the thick of the pandemic when live music was on hold?

MB: Yeah, that’s a great question and so important because these lockdowns for most musicians have been really hard – for us, we were touring almost constantly pre COVID, practically living with and seeing each other every single day, staying active together in that ‘band bubble’. To have that stop so suddenly, and not be able to get together, was really difficult. But we all just tried to stay busy and keep in close contact. Listening to music 24/7 is one of the reasons we all became friends in the first place, so music continued to connect us in that sense. For me, I live out in the bush so there’s always work to be done to stay busy.

TCI: We got to hear a very different side to Smith Street with your unplugged album and series of acoustic shows that met COVID Requirements – how did it feel going from one extreme to the other? From dirty mosh pits to the quieter, more exposed renditions?

MB: Yeah it was different for sure. We were just keen to find any way that we could perform together during COVID. What started as a simple idea kept spiralling into others. Our studio is in the middle of the bush so we were originally going to record a set and then film a live performance for people to watch. We did one live take and it ended up being so good that we wanted to release it officially. It was really fun to get together again and just play all these old songs in new ways – finding new rhythms, tempos, discovering new meanings to old songs after stripping back the layers. When lockdown lifted and we were able to do the few live shows that we did, it just made sense to do acoustic sets – our normal, sweaty punk shows would’ve just been strange with everyone seated, so it felt almost natural.

TCI: You most recently played some live shows with the Brisbane Symphony Orchestra – how was that experience?

MB: It was magical. We were jumping at any opportunity to do anything music-related and although it definitely felt different (you almost feel like an imposter playing in those theatres with professional, classical musicians) it was awesome – an experience COVID created that we probably wouldn’t have had otherwise.

TCI: All of Smith Street’s latest releases have been super successful, with most landing top spots in the ARIA charts. Do you guys feel any added pressure when you release new music now that you’ve determined this level of success?

MB: Nah, we’ve never really felt any pressure to release hits or live up to past success. A song is just a document of that time you are in – sometimes writing a song comes easy, sometimes it’s hard, but we’ve always written what we feel in the moment and never worried about whether it will be a hit – that’s for the labels and managers to worry about. Obviously it’d be nice though. Right now, the only pressure we feel is to just write anything. It’s been so long since we’ve been able to get together and make new music so that’s our next goal!

TCI: What can we expect from the tour?

MB: It’s gonna be awesome because we’ll be touring around a lot of smaller cities in smaller venues like pubs and bars – basically going back to our roots. We’re all gonna feel right at home, especially with everyone (hopefully) able to stand and mosh again. We’ll also be playing a bunch of songs that no one would have heard live before. The acoustic sets have been great, but these kinda shows are what we’ve been waiting for.

Tickets for The Smith Street Band tour are available now through their website. Emerging Melbourne talent Money Boys will also be joining Smith Street as their support act – a band new to the punk scene but already making a statement.

You won’t want to miss this heart-warming yet gut-wrenching return of pure, Aussie punk, so get your tickets now!

UPDATE FROM 12 AUGUST
Shows for QLD, NSW and ACT are being postponed until February 2022. All tickets will remain valid for the new dates. Shows in VIC, SA, WA and TAS are still planned to go ahead in 2021. The band have also announced the addition of extra shows in Canberra and Hepburn Springs.

THE DETAILS
WHAT: The Smith Street Band Tour
WHEN: September – October, 2021 and February 2022
WHERE: Every state across Australia
HOW MUCH: Prices range from $49 – $55 – see their website for more details.

The Sleepyheads on Their Latest Single ‘Nihilist’

The best, most chic way to embrace the cowboy boot trend