The Vaccines' Justin Young is Back in Love City

“It was ten years ago, but Splendour in the Grass feels like yesterday to me!” says Vaccines front-man Justin Young over the phone from his London home.

At the time the group were riding high, hailed as the ‘saviours of guitar music’ after the release of debut album, What Did You Expect from the Vaccines?.

An impossible label to live up to (“saviours… what does that even mean?” lead guitarist Freddie Cowan once quipped), but one which hasn’t sunk the group ahead of the release of their fifth album, Back in Love City.

Other mega-hyped indie-darlings have imploded under similar weight of expectation, but the Vaccines have remained critically and commercially successful with few line-up changes (only drummer Pete Robinson departed in 2016). What’s their secret?

“Once we had that zeitgeist moment, we were able to focus on making records we love and touring the world. Every time we make a record, we feel like we’ve got a better one in us. We still love what we do more than anything in the world.”

Back in Love City is their most ambitious album yet, a technicolor explosion of sonic threads pulled together around the cornerstone of ‘Love City’, a part-dystopian, part-utopian ‘pleasure island’ inspired by cities such as Blade Runner’s LA and Cowboy Bebop’s Fear.

“The phrase ‘now we’re back in love city’ just fell out of me one day. I wasn’t entirely sure what it meant to begin with. I started to explore it with the guys. We love all these border towns like Tijuana, and we love Tokyo, and some of us like Vegas… and some of us hate it!

“I started thinking what if Love City is one of those cities that people visit to be completely transported. But rather to go for commodities or experiences you went for feelings? That’s sort of where it stemmed from.”

Listening to the record and hearing Young talk about it, it seems very much like a concept album. Young isn’t so sure.

“I was pretty adamant [it isn’t], but I got quite heavily challenged on that by journalists so I had to quite quickly admit defeat… that maybe if you want it to be a concept record it can be.”

Recorded in El Paso, Texas with producer Daniel Ledinsky (Tove Lo, Zara Larson, TV on the Radio, Rihanna), the album was finished in early 2020 before the world fell apart, giving the band unexpected extra time to refine the album into something Young says is “more turned up and tuned in”. 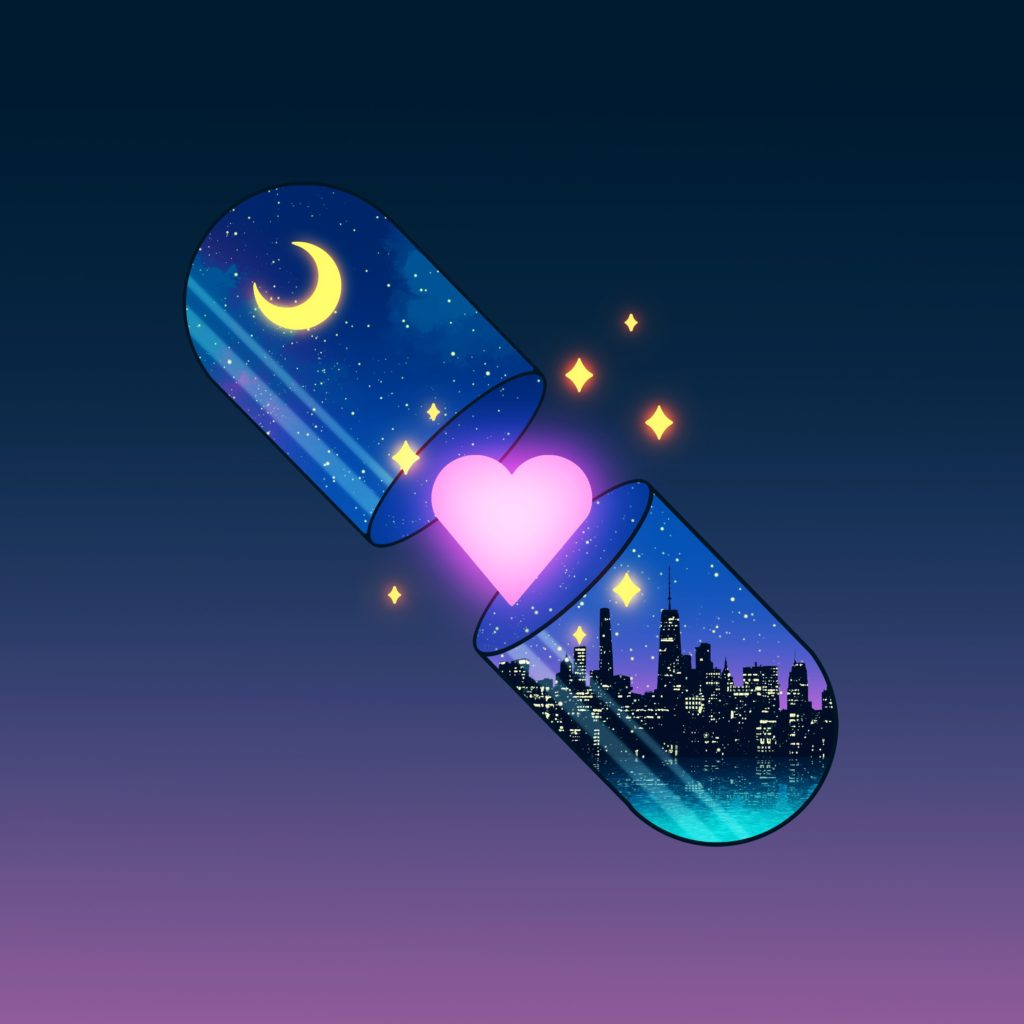 The band also used that time to record an extra song, ‘Paranormal Romance’, an expansive, space western opus which belies that it was recorded remotely: Árni Árnason (bass) and Yoann Intonti (drums) in Reykjavík, Iceland, Tim Lanham (drums) on the Sunshine Coast, and Freddie and Justin in London.

“We sort of joked that we were trying to make ‘Morricone indie rock’ and that song is very much in that vein. The record’s better for it and we’re really glad it appeared.”

Back in Love City finds the band stretching their creativity like never before. Title track ‘Back in Love City’ is eighties pop pulsating to drum loops and synths, while one of Elliot Smith’s nylon guitars features on the dreamy ‘El Paso’.

But despite this, it’s unmistakably a Vaccines record.

“You’re always looking for new ways to move forward and evolve and challenge yourself and remain relevant and sound interesting while retaining your DNA. For me, what makes the Vaccines the Vaccines are the classic, simple euphoric sounding pop songs. But there’s also this frenetic energy at the heart of it.

“We have to be really excited about playing in front of people who love sharing the music with us. That’s obviously a pretty good marker… we obviously haven’t had the privilege of doing that yet.”

It’s two years since the Vaccines last played a live show, but with the UK’s imminent ‘return to normal’ they’re booked to play a series of release week shows starting in Bristol on September 8.

Surely these are the most hotly anticipated Vaccines gigs ever—for both fans and the band?

“Oh man… I fucking hope so! I really hope so. I mean I’m obviously nervous about where the world’s headed, in the right or wrong direction, but from a purely selfish standpoint it’s going to be nice to go out and do our jobs again and have some fun.

“We haven’t been in the same room for eighteen months. That’s happening for the first time next week. Can’t wait is the honest answer. Can’t wait.”

Can we expect to see the Vaccines tour the new record in Australia?

Back in Love City is out 10 September.