With a classic, guitar-driven sound and frontman Jonny Nystâ€™s honey-smooth vocals and equally as slick stage presence, The Vernons are a great band to see live.

Recently signing some big figure sync deals in the United States, The Vernons are playing a three date single release tour, celebrating their most recent single â€˜Rollinâ€™ Back To Youâ€. 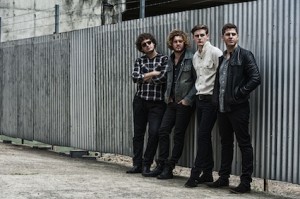 The Vernons are coming to Black Bear Lodge

Imagine Jet (in their prime) being fronted by Jack White and you have â€œRollinâ€™ Back To Youâ€- a track that cements the groupâ€™s status as purveyors of really, really good music.

The Vernons will be supported by Brisbane trio Go Van Go (who echo The Vernons in their blend of classic and contemporary elements of rock music) and four piece Jakarta Criers, who play similar rock tunes with more of an indie vibe.

Keep an ear out for â€œStanding in Lineâ€ and its ridiculously catchy chorus that will undoubtedly have Black Bearâ€™s floorboards creaking. The Vernons’ last show at Black Bear Lodge sold out, so get in quick to avoid disappointment.

What:Â The Vernons’ “Rollin’ Back To You” single tour

When: Thursday 22nd of May