All aboard! Act/Reactâ€™s interactive Titanic is setting sail from the Brisbane Comedy Festival â€“ and while thereâ€™s no guarantee youâ€™ll make it to America, youâ€™ll have the time of your life on the way to the bottom.

Last year, the Brisbane-based comedy troupe brought to the stage perhaps the least stageable film of all time, in Speed: The Movie The Play. Hot on the heels of resounding success, theyâ€™ve set themselves an even bigger challenge: James Cameronâ€™s epic melodrama Titanic.

The plot is thicker, the costumes fancier, and the setting, well, titanic. But somehow theyâ€™ve pulled it off once again. With the help of volunteers from the Queensland Maritime Museum, the Ship of Dreams takes convincing shape in the Powerhouse Plaza, its two-and-a-half meter high prow proudly presiding over the festival. Before it, stand three full sized lifeboats, which pen in the first, second and steerage class passengers (and yes, you will be sorted on arrival). Around it are scattered a veritable treasure trove of weird and wonderful props, including a topiary and a watering can.

Audience interaction is the order of the day â€“ so donâ€™t expect to stay in your seat. Passengers are chivvied from ship to ship all night. Theyâ€™re given lines and props, and drafted into the on-deck orchestra. A rotating cast of Roses are plucked from their seats and pulled into the action. You may, if youâ€™re very lucky, even get into a lifeboat. Or you may, like me, sadly clutch a lifejacket as the ocean rolls in. 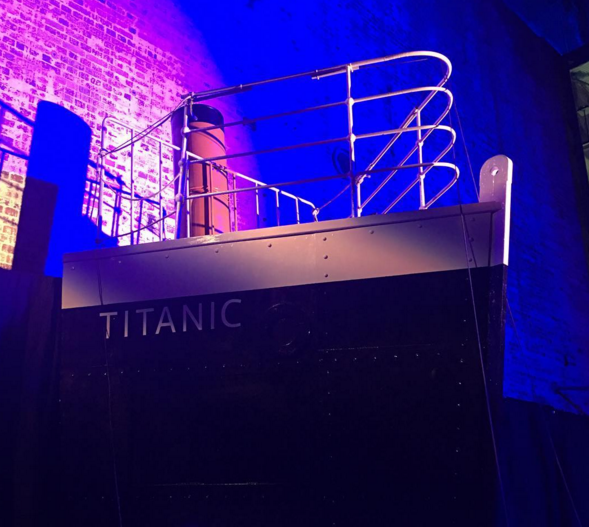 The props are utterly ridiculous and because of this, theyâ€™re hysterical. Stagecraft is all well and good, but two incredibly lifelike dolphins leaping around the prow of the Titanic is not funny. Two pool toys colliding mid-air and then sadly flumping to the ground is rib-crackingly so. The script is a heady mix of well-polished jokes, improvised genius, and awful, awful puns. The cast (despite letting me drown) do a tremendous job, balancing a sinking ship, a kaleidoscope set and a boisterous audience with remarkable cool and unwavering humour.

Thereâ€™s a sort of childish glee to the show, as it taps into the vast imaginative space most of us start quashing when we hit our teenage years. Blue sheets become a raging ocean. Shower curtains become a submarine. Plastic sea-life abounds. Act/React take all the toys we had long ago put away and passes them back. â€œHere,â€ they say. â€œPlay.

With the lifeboats definitely overbooked, and the play itself steaming ahead, itâ€™s looking like another knock-out season for Act/React. And, if these shows are going to become an annual tradition, Iâ€™d like to get in an early request: Snakes on a Plane: The Movie The Play, 2017.

What Titanic: The Movie The Play

For more details or your ticket to a new life in America, head to the Powerhouse website here.

Sherpa – A Narrative of Loss, Greed and Uncertainty