Titanic: The Movie The Play Prepares to Set Sail

â€œItâ€™s like a duck â€“ on top of the surface, itâ€™s all serene and calm; under the surface: madly paddling.â€

As Titanic: The Movie The Play prepares for her maiden voyage, we spoke to director and co-writer Greg Rowbotham about the challenges and joys of launching the Ship of Dreams from the Powerhouse courtyard.

When I catch up with Greg, heâ€™s preparing for the arrival of a replica prow. Standing two-and-a-half meters tall and three deep, the anticipated ship is no mere model.

â€œSheâ€™s huge, yeah,â€ Greg confirms. This impressive piece of set-building is the work of talented volunteers from the Queensland Maritime Museum, who, when asked if they had a ship to spare, built one from scratch. In return, Act/React are shining a spotlight on one of the cityâ€™s lesser known institutions, as well as making some generous donations from ticket proceeds. â€œIt works for them and it works for us, so everyoneâ€™s winning at the moment.â€

Act/React, the company behind Titanic and last yearâ€™s Speed: The Movie The Play, are a bit of a local treasure, a Brisbane-based comedy troupe with a penchant for the absurd and close ties to local historical societies. In 2015, Speed took audiences hostage aboard a fully functional 1974 Volvo B59 bus, courtesy of the Queensland Omnibus and Coach Society, who subsequently enjoyed some unexpected time in the limelight. With its immersive set, homemade special effects and infectious sense of fun, Speed was a runaway success, and laid the foundations for Act/React to aim even higher. Now, the company are taking on James Cameronâ€™s epic melodrama, Titanic.

This new production has come with its own set of challenges and rewards: the set, for a start, is much more ambitious. Along with the bow of the unsinkable ship, Act/React have laid in some provisions for any unexpected maritime mishaps.

â€œThree full sized lifeboats,â€ Greg tells me with relish. â€œThese are real boats from real ships, so they can seat, oh, thirty people each?â€ But if that sounds like ample room, donâ€™t be too sure. â€œOnly the women and children get onto them, of course,â€ Greg continues. â€œThere werenâ€™t enough life boats to save everyone on the Titanic and we are staying historically accurate! There wonâ€™t be enough life boats to save everyone â€“ some people are going into the sea, Iâ€™m afraid.â€

Drowned passengers aside, the sheer scope of Titanic has also proved a little harder to translate to stage.

â€œSpeed was an action comedy, itâ€™s a one-and-a-half movie that is ninety percent set on the same bus. Titanic is three hours and seventeen minutes long.â€ For a moment, Gregâ€™s voice is war-weary, the tone of a man who has recently sat through all three hours seventeen minutes more than once. â€œIt was a greater challenge. It took longer to write and a lot of re-edits; we had to try and get it down to an hour, we had to sink the boat quickly and still give the experience of being on it, and being a part of it, and being part of that love story.â€ 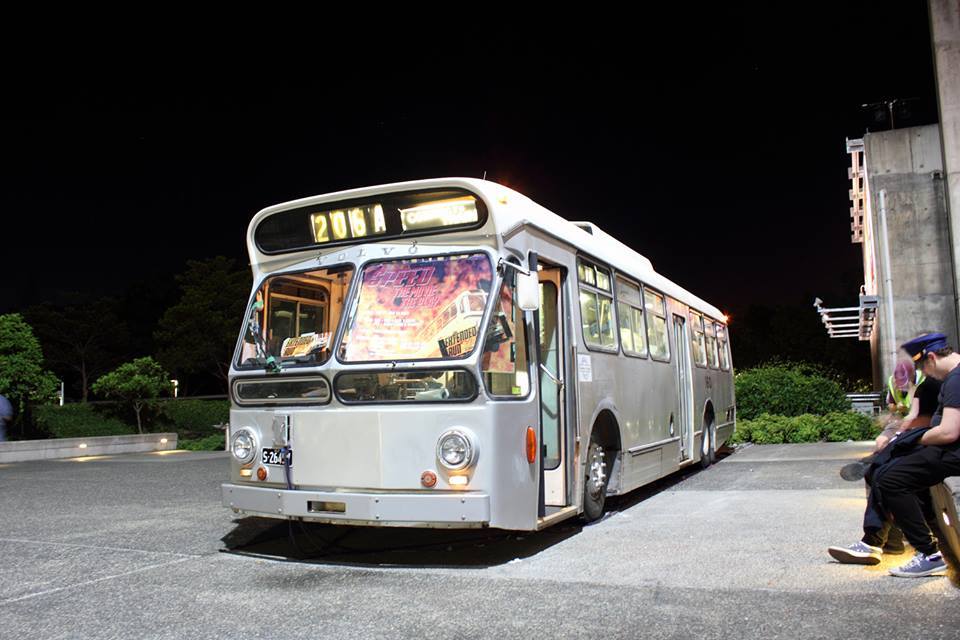 The much smaller, vintage set of Speed.

Itâ€™s not just the script that poses problems: with an outdoor set and no recourse to Hollywood-grade special effects, the matter of how exactly to sink White Star Lineâ€™s finest looms large. Fortunately, the Act/React team have some experience in the matter of impossible stunts.

â€œHow do you jump a bus across twenty meters, when youâ€™re not allowed to move a bus? And now, with Titanic, how do you sink a giant boat on a concrete floor and have audience members dying in the icy Atlantic â€“ in a fun way? I think weâ€™ve solved that problem too.â€

More so than Speed, Greg expects Titanic will hit cultural touchstones. While Speed (the movie, not the play) was something of a cheesy relic, Titanic is a pervasive classic â€“ and Act/React have endeavoured to check off all the big moments.

â€œAnything you can think of in Titanic, we do, including the â€˜Iâ€™m flying, Jack!â€™. Weâ€™ve got lifeboats, itâ€™s got a man being killed by a propeller: weâ€™ve got it all!â€

Even, it seems, a ship full of passengers bound for the New World. â€œYou are members of the ship,â€ Greg says of the audience. â€œSo there are people in first class, people in steerage, they get treated accordingly. Dress well, is my advice. If you want to get into first class, donâ€™t dress down, dress up.â€ Period appropriate costume, I must note, is also welcomed.

While the show is now steaming happily towards opening night, getting it there has been a slightly different process compared to a run-of-the-mill drama. Even with the cast on board, revisions are still being made, with rehearsals not just about learning lines, but planning for every eventuality.

â€œYouâ€™ve got to be able to roll with the punches: people yelling things at you, things not working and just being able to stay in character and continue on with the story. The rehearsal process has been mainly: â€˜roll with it, go with itâ€™.â€

â€œItâ€™s just giving the actors the experience, and the confidence and the permission to go â€˜off bookâ€™,â€ Greg says. â€œItâ€™s fuzzy around the edges and thatâ€™s what makes it an experience worth seeing.â€ With so many variables, no two shows are ever exactly the same.

Given the promise (or perhaps the threat) that anything could happen, I ask if Speed ever went radically off the rails.

â€œNot once!â€ Greg exclaims, still surprised and perhaps the tiniest bit disappointed. However, if itâ€™s all smooth sailing for Titanic, it wonâ€™t be the result of luck, but meticulous planning. â€œWe engineered [Speed] to fail successfully. We know things are going to â€“ in inverted commas â€“ fail, and so therefore weâ€™ve put in all these redundancies so that we can get round the problem, in fact, make it look like it was part of the script.â€ 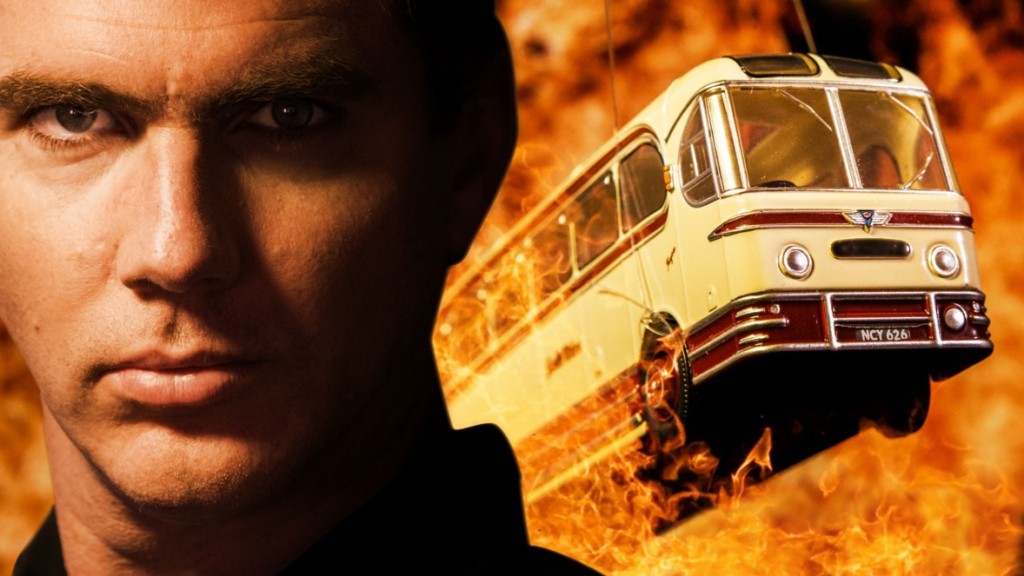 Act/React have form for interactive fun.

Beneath an incredible knack for comedy, however, Act/React nurtures a serious desire to make theatre fun again, and to return it to the people.

â€œBefore Speed, we were just sitting around talking about how fun theatre should be fun,â€ Greg tells me. â€œTheatre should be a really fun thing, and we felt that a lot of the time people had kind of lost that. Theatreâ€™s become veryâ€¦itâ€™s worthy or itâ€™s meaningful, which of course it can be. But you think, back in Shakespearian times, theatre was of the masses, it was entertainment.â€

Indeed, what strikes me most about our conversation is the sense of genuine respect this company have for their audience. Unlike so many comedy routines that single out audience members for humiliation, Act/React are more concerned with making heroes of their passengers.

â€œWe looked far and wide for something like Speed and like Titanic and we couldnâ€™t find it.â€ There is a lack, Greg says, of shows that are: â€œinteractive in a positive way not justâ€¦heckling or hurting people. We donâ€™t like that, we find that quite ugly.â€

â€œWeâ€™re not going to make our fortune doing this, weâ€™re doing it because we have something to offer: thatâ€™s a comedy theatre show that no one else has seen in the world, and an experience for an audience where they get to experience it: theyâ€™re not just passive, but theyâ€™re made to be heroes and theyâ€™re made to be part of the fun. Itâ€™s such a gift for us to be able to do that for other people â€“ and that sounds a bit silly, but it really is, to go: â€˜we had fun, the audience had fun, the theatre enjoyed having us thereâ€™. Itâ€™s a victory all round.â€

â€œBasically,â€ Greg says, summing up the creative overload that is Titanic, â€œ[audiences should] expect to be part of the show, expect to be involved in it in a fun, interactive way, where they may become the hero of the show and we will make them look as good as possible.â€

Final preparations are now underway for Titanic: The Movie The Play to make sail so near, far, wherever you are, make sure you get down to the Powerhouse Plaza for the most memorable voyage of your life.

What Titanic: The Movie The Play

For more details or your ticket to a new life in America, head to the Powerhouse website here.

Her Busiest Year Yet! An Interview with Singing Sensation Christine Anu